Did the CCP Cause a Rally in Bitcoin?

Bitcoin is up 50% of the lows and there are a plethora of reasons why the crypto currency has rallied, but perhaps the most important one is one that is least discussed—China, explains Boris Schlossberg of BK Asset Management.

China is usually seen as the reason to for Bitcoin’s swan dive in April after the CCP instituted a crackdown on mining, which reduced the country’s global share of mining from 70% to close to 40% today, but other decisions by the CCP may have had as much of an impact on the rally of Bitcoin as they did on the cryptocurrency’s decline.

During the week of July 23rd Chinese authorities issued a series of decrees that roiled the capital markets. First, Chinese authorities lashed out at DiDi (DIDI), the giant Asian ride-sharing concern that IPO’d in the US against the government’s wishes. The regulators effectively kicked off DIDI apps from Chinese mobile platforms, effectively destroying the company’s business. Next, the authorities trained their focus on the Chinese prep-education industry wiping out $700 billion dollars in market capitalization for the sector in a matter of days.

Although investors in the West certainly took notice of these moves, the general reaction of the markets was to shrug off these events as internal matters. For Chinese entrepreneurs, however, the message was far more potent. It was clear that CCP allegiance to capitalism, and most importantly, property rights were thinner than rice paper and the heavy-handed tactics by the government may have triggered a massive wealth exodus in the country as citizens liquidated assets to convert to Bitcoin. 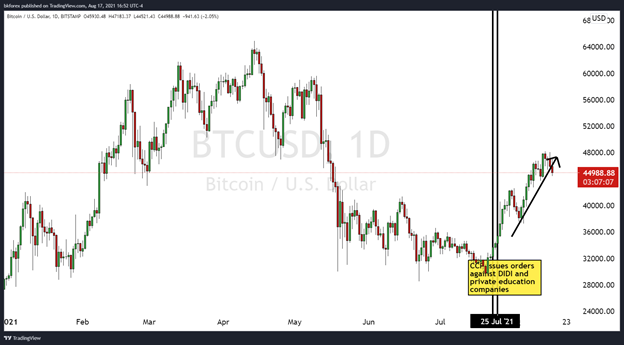 Although it’s impossible to tell given the anonymous nature of Bitcoin trading, it may not be a coincidence that the latest Bitcoin rally started on the day of Chinese regulatory actions.

Shuyao Kong, an analyst at blockchain software company ConsenSys notes that, “Fundamentally, Bitcoin is in a different paradigm from the Chinese political structure. Right now, [China’s government] cracks down on anything that it doesn’t have control over. Bitcoin is one of those things that it doesn’t control.”

Conversely, it is precisely because CCP cannot control it that Bitcoin is so attractive to the Chinese populace. It is in fact the only way for Chinese citizens to protect their wealth from the long arm of the CCP. So, Bitcoin remains inextricably tied to the politics of China. While in the West it serves as nothing more than a speculative instrument and a play on libertarian fantasies, in the East it is in fact the only real form of wealth protection and as long as the CCP continues to assert and expand its control over the markets the value of Bitcoin will rise.