S&P 500 Reaches New Highs as Inflation Remains a Concern, but Not a Serious Danger

Stocks had a bit of a hiccup after the release of the latest FOMC minutes on Aug. 18 showed a willingness to consider tapering the Fed’s bond buying.  However, the market’s rally resumed and the S&P 500 Index has reached new highs in a low-volatility market, explains Marvin Appel of Signalert Asset Management.

It appears that inflation fears are not getting much worse despite the persistence of inflation in the July CPI report.  The TIP/IEF ratio in the chart below shows that the Treasury Inflation Protected Securities ETF (TIP) has stopped outperforming nominal Treasuries (IEF) since May.  The 10-year breakeven inflation rate is 2.3%, a level first reached in March. (The 10-year breakeven inflation rate is the rate of inflation over the next ten years that will generate equal total returns from 10-year TIPS and 10-year notes, reflecting market participants’ implied inflation projection.)

10-year Treasury note yields have crept up from their early August lows, now at 1.34%.  Today, the 7-10 year Treasury note ETF (IEF) is down 0.4% while TIP is down less than 0.1% so this bears watching.  Commodity ETFs (DBC, DBB, DBA, DBE) have been moving roughly sideways for the past three months, suggesting that prices may stabilize at evated levels, but will probably not continue to accelerate higher.

From the perspective of a consumer, this remains a challenging environment as price hikes and supply shortages remain annoying.  But from the perspective of an investor, we might be in an optimal environment where companies can maintain profit growth without provoking the Fed into drastic action.  The slight reduction in the spread between high-yield bond and Treasury yields over the past week (from 3.42 to 3.26) reflects the perception of a slowly improving climate.  The behavior in high-yield bonds is consistent with a recent improvement in market breadth and in the relative performance of small-caps since Aug. 19.

It is one thing to say that stocks have dodged another bullet for now, but that falls short of saying that there is any potential catalyst for a strong rally from what appear to be elevated levels with lots of good news already priced in.  My expectation is for stocks to avoid a significant correction while our model remains on “hold” (as opposed to “sell”), but I remain cautious and would advise against chasing rallies.  Stick to SPY as the core holding, and consider bottom fishing with covered-call writing on SPY in the event that VIX blips up to 19% or higher.

Our model switched from favoring emerging markets (EEM) to favoring the S&P 500 (SPY) on 3/31/2021.  Since then, EEM has lost 3% while SPY has gained 13%.  China has dragged down emerging markets as the government there has lashed out at its own technology giants, prioritizing political control over economic vitality.  The divergence between EEM and SPY has reached a historically oversold level for EEM, suggesting that EEM should start to keep pace with SPY.  If you were going to add to emerging market exposure, now would be as good a time as any.  But if you weren’t going to add to emerging markets, don’t take the recent weakness as a reason to bottom fish.  The trend is your friend, and the trend strongly favor developed markets, particularly the S&P 500, over emerging markets. 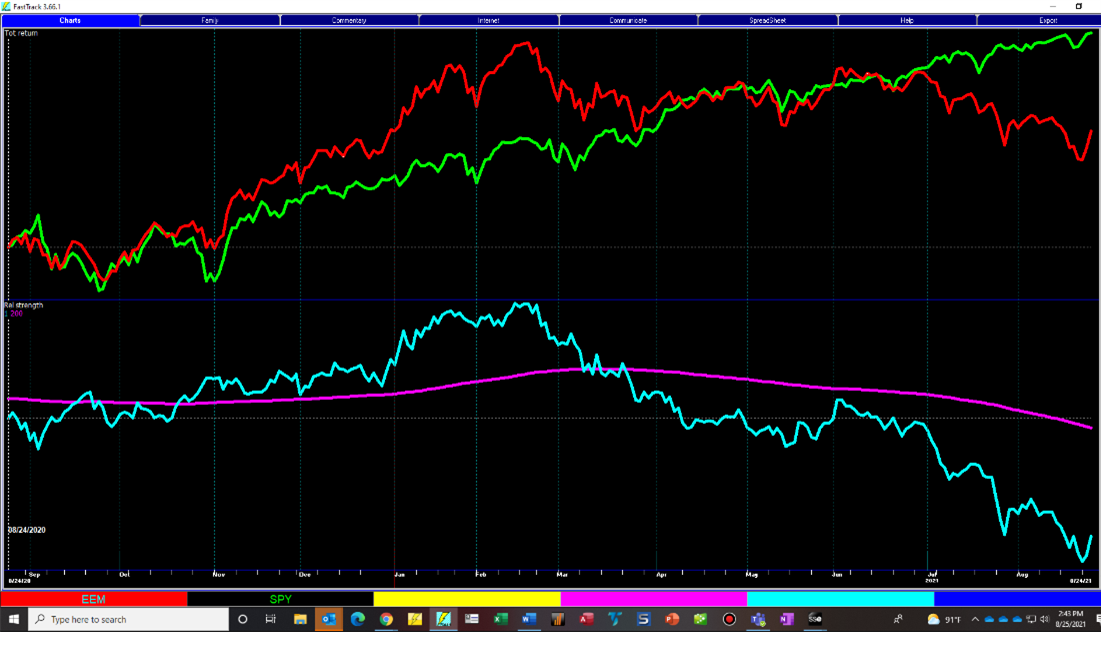 Figure: EEM (red) and SPY (green), total return for past year.  SPY has been in a solid uptrend since Novemvber while EEM peaked in February. EEM / SPY (light blue) and its 200-day average (magenta):  The ratio is now so far below its moving average as to be relatively oversold for EEM.