Key to US Dollar Could Be Found on the Bitcoin Chart

Last week we discussed how the US dollar became a show about nothing. Yes, it's in a mild uptrend but overall has been in a consolidation going all the way back to July 21st, explains Jeff Greenblatt of Lucas Wave International.

It has stalled shy of the 163rd day of the rally after it found a low on September 3, which is the 161dg vibrational day of the Gann calendar. To be clear, the greenback reaction to the Fed announcement was mixed. It started bearish, turned very bullish, but finally stalled. The problem is the calculations for the greenback are clearer on the Bitcoin chart.

As it turns out, Bitcoin and anything else turning right here could be responding to the seasonal change point. For those of you who are new, markets don’t go straight up or down. You knew that but what some of you might not know is markets tend to turn on or very close to the change of season.

Let’s go over Bitcoin, it peaked on the 165dg vibrational day on the Gann calendar, which by itself is not significant. When it is put in context of the entire pattern, it was a 66% retracement against the top earlier this year. Now it found a low on September 21st, which is the 179dg vibrational day but there is another reading on this pullback that lines up with the bigger vibrational day. Also, the actual bottom came in on the last seasonal change point in June. So, the pattern is very close to a 90dg distance on the Gann calendar. Overall, this means conditions are ripe for Bitcoin to go higher. It is already putting in a tweezer’s reversal for the candlesticks. 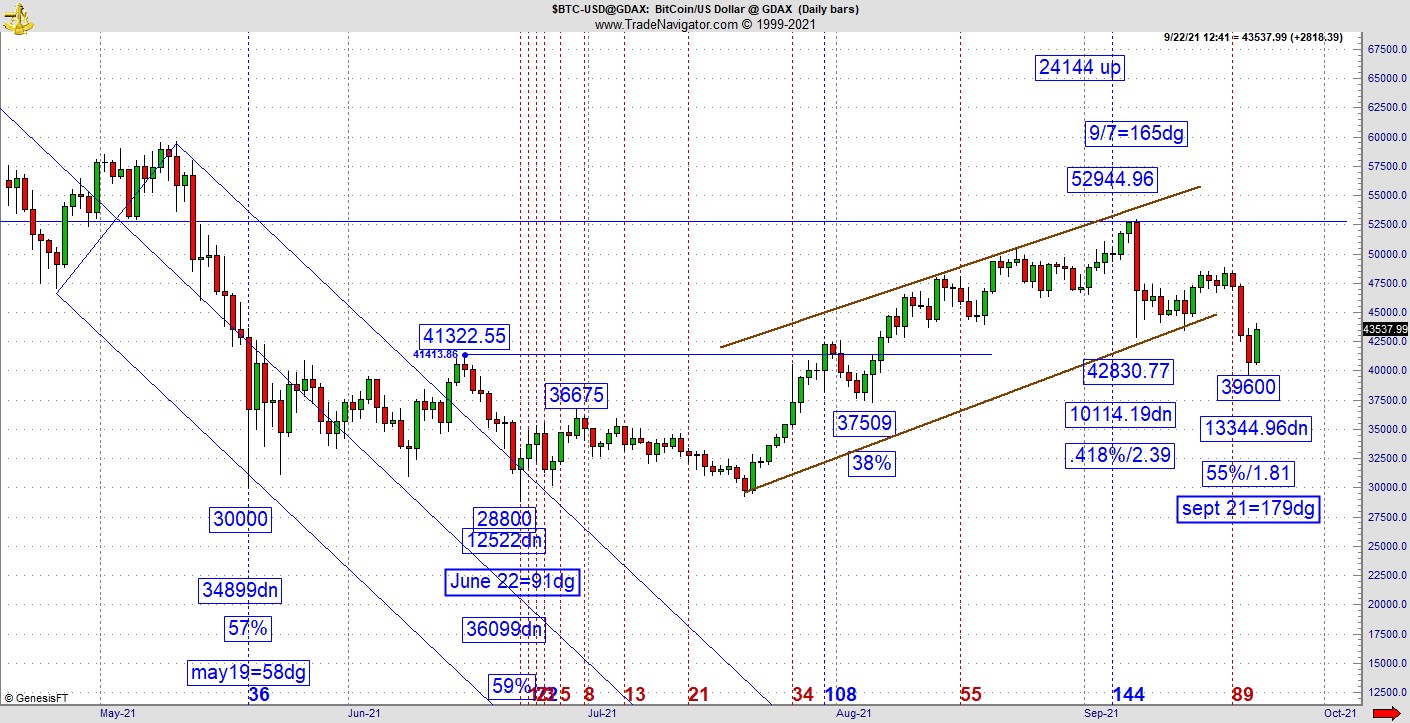 As you know, the Fed was all over the map. While Powell complained inflation is continuing to rise, he expects inflation to run at 4.2% this year but projections over the next two years should come in around 2.2%. It’s not vastly different from what he said at Jackson Hole. Nothing has been settled although some believe it is. It appears the Fed is tone deaf to the amount of money printing that has gone on the past 18 months. Danielle DiMartino Booth on Fox Business suggested Mr. Powell hang out at the grocery checkout stand for about an hour so he can see how inflation is impacting everyday Americans. Oddly enough, the prospects of rate hikes and a schedule for tapering on bond purchases did help keep the dollar elevated.

If this is truly the case, one would expect the stock market to take a hit. This is in opposition to what happened a month ago at Jackson Hole where it appeared they were more interested in saving the stock market and sacrificing the greenback. Perhaps as the events in Afghanistan have sunk in, the Fed needs to protect the petrodollar. Confidence in the US fiat currency is only going to be as strong as the world’s confidence in the US military.

Elsewhere, the Transports bounced marginally, no doubt due to the big drop in FDX, which gapped down. Even UPS gapped down but started to recover. Overall, the Dow gapped down from its intermediate-term trend line but is now testing that gap down. Fourth quarter prospects will depend on the results of this test.

Overall, it appears Powell sent mixed messages given they plan on a taper, which could be wrapped up by the middle of next year while at the same time they plan to start raising rates. In separate sequences I heard him say they plan on a gradual taper, but he also said no tapering schedule has actually been agreed to. So, the market is looking at a potential taper that hasn’t been agreed to while rate hikes are on the table while they still anticipate getting the upper hand on inflation. He’s starting to understand the fine art of “Greenspan Doublespeak.” That being said, the initial reaction to the announcement was bullish stocks, bearish greenback but when he started talking about a tapering schedule, stocks stalled while the dollar jumped straight up. When he finally stated there was no exact time schedule for the taper the market went back up and the greenback stalled. If you like certainty and stability from your Fed, Wednesday was not the day for you. 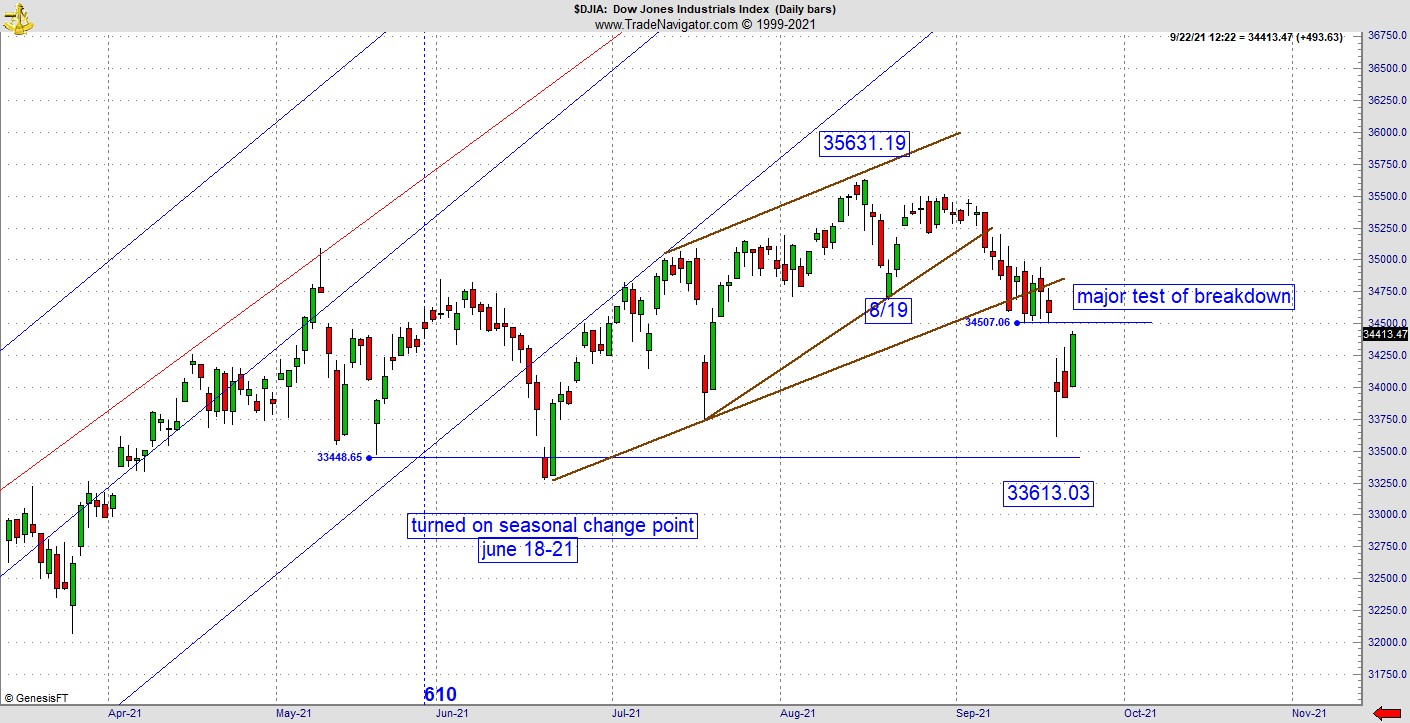 Here’s the takeaway. Bull markets are driven by easy money, low interest rate environments. The Fed is signaling very cautiously they want to change but are trapped in a no-win situation. The Covid situation will prevent any real recovery from sustaining for a variety of reasons. Additionally, the Evergrande situation was glossed over. Nobody was talking about any exposure by American banks. Risk will remain extremely high with very little margin for error. It's important for traders not to go against the Fed given many people got buried in the teens decade going short against these easy money policies. The Fed is transitioning out of a total easy money policy. Consequently, markets can get hit and if they are to get hit, now is the time. Going forward, continue to pay close attention to the Dow test of the gap down while at the same time pay close attention to Transports and the situation in Bitcoin/US dollar. A Dow failure on this gap test could usher in that elusive bear phase.