Why Is the Crowd Suddenly Worried About Interest Rates?

Markets sold on Tuesday ostensibly because the ten-year rate suddenly spiked. There are lots of reasons for the market to be concerned, interest rates didn’t seem to be the highest problem on the list, explains Jeff Greenblatt of Lucas Wave International.

What is going on? Here’s the problem in a nutshell. Last time the market was worried about rates was the 4th quarter of 2018. According to ycharts.com, the highest-level rates reached was on November 30, 2018, at 3.12%. That number doesn’t mean much until we realize the average long-term rate over many years is 4.51%. Consider the economy couldn’t even handle or sustain any higher cost of borrowing and the market went down the tubes. Less than a year later we learned the Fed had to pump billions into the repo market or the banks might have gone down. That was September 2019. You know what has happened since then.

What concerns me is the fragile psychology at this stage of the game. Check out the weekly chart of the ten year. This is a chart that is consolidating near the high end of the range. According to ycharts, the current rate is only 1.29%. The question here is why so much concern for a pattern that is much closer to the top than the bottom. Last time the stock market didn’t start dropping until the ten year dropped below 124 which became the second thrust of the pattern. We are not even close with a price point in the 131 handle. 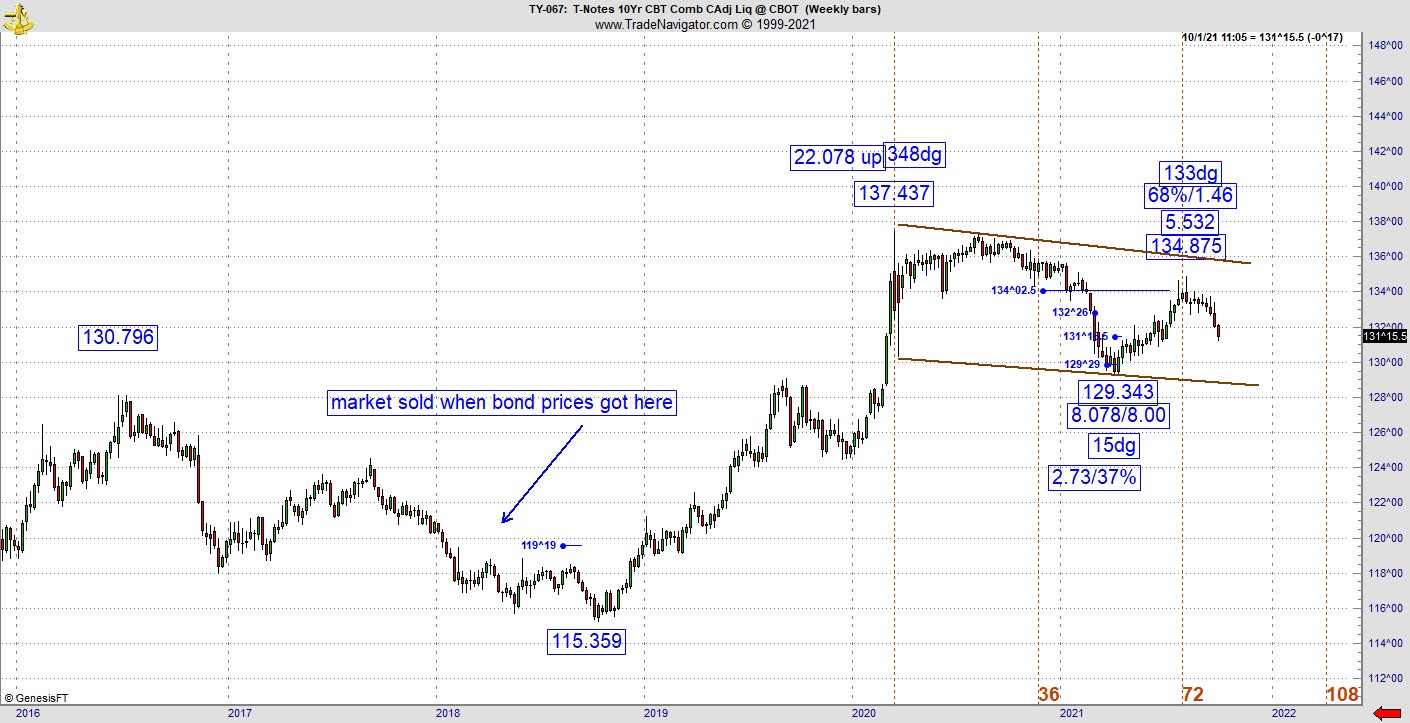 Either the insiders know something we don’t, or the economy is really in much worse shape than anyone realizes or the Fed is willing to admit. One can’t blame the Fed too much. Imagine if Powell came out and said the economy can’t even sustain any rise in rates. What do you think the market would do in that case? There are a lot of structural problems with the economy. Right now, it seems to be all the people losing their jobs because of the Biden mandates, which is at the top of the list. This is an economy doing a better job at eliminating jobs as opposed to creating them. Is it any wonder why the crowd is suddenly concerned about the recovery? The economy could not sustain the higher cost of borrowing when rates were in the three handle. Now it can’t seem to sustain when rates are only in the one handle.

So why is the crowd suddenly worried about interest rates? To answer that question, people like us who study these conditions on a regular basis realize there is nothing to lose sleep over until such time the pattern breaks support. The low in April was a polarity flip based on prior resistance from the 2016 and 2019 price highs. I wouldn’t say this is an irrational fear, especially when we put the Evergrande situation in the mix. But I wouldn’t have thought the crowd would pick this data point to get jittery with everything else out there floating around. I would’ve thought the crowd would panic only after support breaks. I think people are slowly figuring out the only reason the market has recovered over the past 18 months is not because of real economic growth or productivity but due to the Fed bailing out everything in sight. All I can tell you with rates at 1.29%, which is well below the long-term average of 4.51%, the fact the crowd fears any rise in the cost of borrowing is very troubling.

Elsewhere, the US dollar took out our August high at 163 days up. I’ve been here talking about this 161-month window, which still has another month to go from the 2008 low for at least six months. 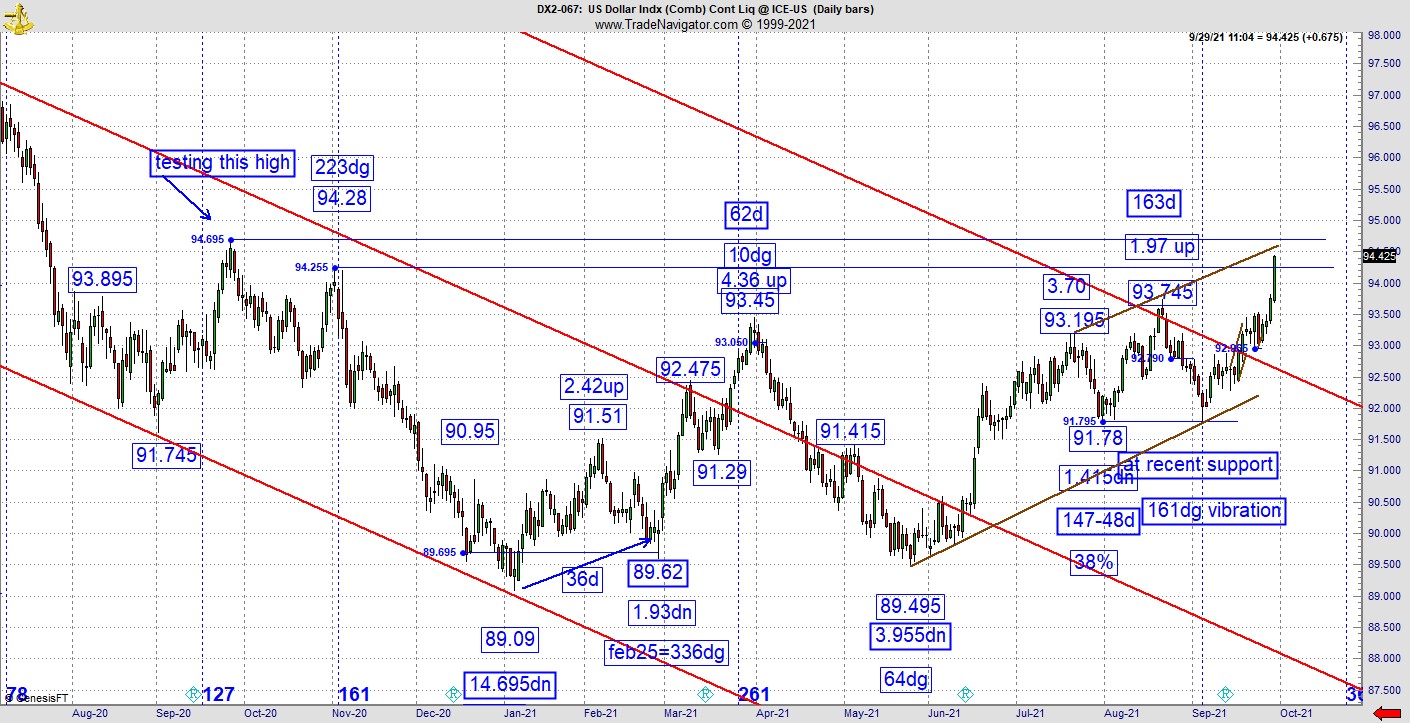 Does it mean our Kairos vibrations have failed us? Not at all. This is one of the best examples you’ll ever see of the market doing what it wants, whenever it wants. What has happened is the pattern had a serious decline for two weeks then promptly turned around right on the Gann calendar’s 161dg vibrational day. Credit Larry Pesavento for teaching everyone to trade exactly what is in front of them. I would say our vibrational work might have failed us if the pattern stopped going down on any other day with any other vibration. But the fact it turned around on the exact place where it was true to other golden spiral vibrations around it shows us the Kairos vibrations worked to perfection. One of the main benefits of price and time squaring is we learn what is coming against us before there is serious financial damage to our trading account. As you know, I told you that it changed course right on the 161dg vibration and consequently showed you great trading setups along the way.

So where does that leave the greenback? For the first time since the crisis started, the price action sits outside the bearish Andrews channel. It’s still close enough to the line to become a false breakout but now it has taken out the prior high. It appears something else is going on. Up next for the dollar is a test of the near-term trend line as well as overhead resistance going back to the September 25th high of a year ago. What this test represents is the origination of the thrust that led to the last leg of the bear move from 2020. I suspect this would be a good place for a consolidation. If the price action doesn’t stall out here, there is a very good chance it will end up close to 98.

What is the takeaway from all this? First of all, the crowd realizes the economy has not and will not recover. Restoring what was locked down does not constitute real economic prosperity especially when you consider the destruction to small businesses that will never reopen and the commercial real estate market, which has become collateral damage.

Furthermore, for us traders, one always must trade exactly what is in front of us. Conditions can look a certain way and the greenback may still collapse but anybody who was short a pattern like this missed out on some really fine-looking long setups over the past few weeks. Markets can and will do whatever they want, whenever they want. It does not care what we think, nor does it even acknowledge our existence.

In the natural, China has been cracking down on cryptos like Bitcoin. The greenback is a likely beneficiary. The bottom line is the cycles are one level deeper than the news event so it would be folly to suggest the greenback is higher because cryptos are getting hit. This is the symptom of the larger cycle picture. The pattern reacted to the Gann calendar before any of this happened. Duncan in The Dollar Crisis stated governments have the ability to postpone the day of reckoning for months or years into the future. The bottom line is it does not matter why the dollar recovered, only that it is recovering. So, the dollar is not ready yet but when it does go, it could happen very quickly. I’ve heard there are at least 100 countries led by Saudi Arabia who are considering dumping the petrodollar all at the same time. When it is time to go there is no power that will be able to stop it.