Trade on Friday was a push. The S&P 500 (SPX) finished the session at 4,381, a loss of only 0.2%. It was a disappointing end to a solid week for bulls, says Jon Markman, growth-stock specialist and editor of Strategic Advantage.

The benchmark notched a weekly gain of 0.8%, breaking a four-week losing skid. In many ways the past week was a throwback to stock-market rallies of decades ago. Energy and auto stocks roared higher as West Texas Intermediate crude oil briefly topped $80 per barrel and analysts gushed over the electrification of General Motors (GM) and Ford (F).

Traders will discover whether that is enough to push the S&P 500 back above 4,400, its 50-day moving average. I suspect that will happen, but my confidence level is less than 75%.

Seasonal strength, the start of Q3 earnings reports, and professionals looking to put year-end money to work should prove too much for bears. Yet frankly sellers are proving more resilient than I expected; don’t dismiss them out of hand.

Energy was the standout sector as West Texas Intermediate crude oil briefly topped $80 a barrel, setting a seven-year high before settling up $1.12 at $79.42. Shares of apparel suppliers, cable operators, and medical device providers lagged. The 10-year US Treasury yield rose to a four-month high at nearly 1.61% from 1.57% a day earlier.

US September non-farm payrolls rose by 194,000 vs. consensus expectations for an increase of 500,000 in a Bloomberg survey. The number was depressed by seasonal adjustments related to school hiring impacted by Covid-19.

The unemployment rate, derived from a separate survey in which families are queried instead of businesses, fell to 4.8% from 5.2% in August. That was still up from 3.5% in February 2020 before the pandemic struck, BLS noted. The number of unemployed has grown by 2 million since then to 7.7 million in September, BLS said. Another 4.5 million part-time workers were estimated to prefer full-time work, while an estimated 6 million others were not counted in the labor force because they'd stopped looking for the job they want, BLS said. 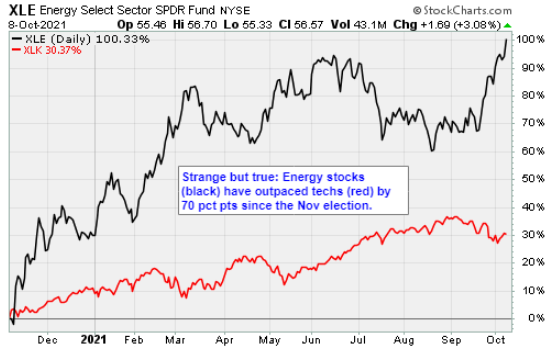 Energy stocks accounted for 9 of the 10 biggest gains in the S&P 500, with General Motors (GM) along for the ride after Credit Suisse said the automaker's investor presentations this week outlining its plan for doubling annual revenue by 2030 while transitioning to an all-electric future made "a compelling case for multiple expansion." GM shares gained 4%.