Volatility Remains High as the Battle Between Bulls and Bears Continues

Seven sectors were stronger than SPDR S&P 500 ETF Trust (SPY), up 0.83% the week ending 10/8/21. Energy (XLE) and Financials (XLF) were the best sectors, Communications (XLC) and Real Estate (XLRE) were the weakest.

Market breadth was mixed. The New York Stock Exchange Index (NYSE) had 1735 advances and 1754 declines. Nasdaq had 2100 advances and 2731 declines.

It is likely to be more of a challenge to make money until market breadth improves on the Nasdaq and the New York Stock Exchange.

10-Year US Treasury yields rose to 1.605%, its highest level since June, closing under highs between 1.70 and 1.765 earlier this year (Figure 1). Support is 1.35% (purple line). The rise in yields is helping financial stocks and hurting growth stocks and is likely to remain.

During weakness early in the week, new lows increased but remained below 150, which was bullish.

A significant correction is not likely until new lows rise and close above 150 (blue line). On the other hand, it would be bullish if new lows fell to below 25 consistently. 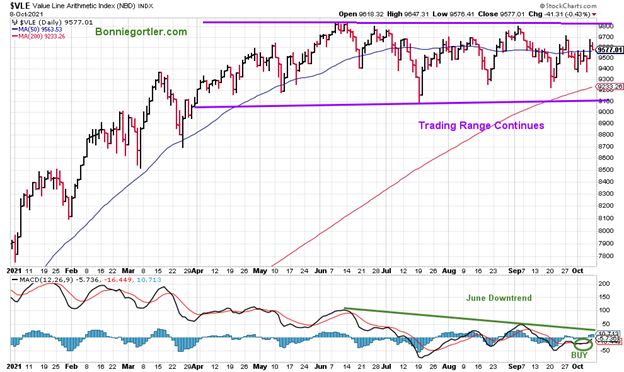 The Value Line Arithmetic Average is a broad index, a mix of approximately 1700 stocks. It remains in a trading range. The direction of the breakout or breakdown will be the clue to the next move.

MACD is now on a new buy. If MACD rises and the June downtrend in momentum is penetrated and rises further, then the odds improve the breakout will be to the upside.

The Daily Nasdaq AD-Line broke down in July (pink line) and trended lower into August after making lower highs in July. The AD-line failed to get through the June downtrend (black line) and turned down in September, and continues to make lower highs.

Further weakness in breadth on the Nasdaq would be damaging in the short term.  It's positive the higher low from August remains (orange arrow).

An improvement in breadth breaking the downtrend this week would be short-term bullish for the Nasdaq.

There is no change in the weekly Advance-Decline line (chart not shown). It continues to fall after breaking the March uptrend. However, the AD-Line is threatening to make a lower low if market breadth weakens with the recent weakness. 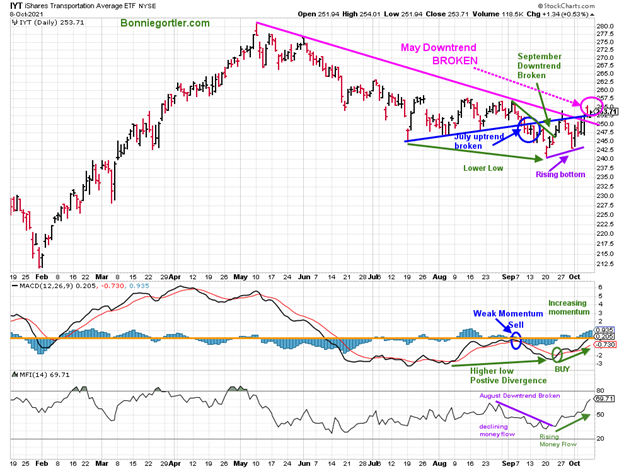 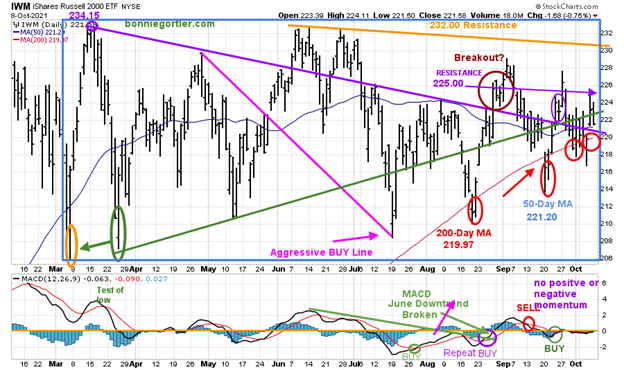 The bottom half of the chart is MACD (12, 26, 9), a measure of momentum.  After breaking the June downtrend, MACD gave repeat buys in August but no meaningful rally. MACD is on a buy. No strength yet, but I remain optimistic as long as the March low continues to hold. 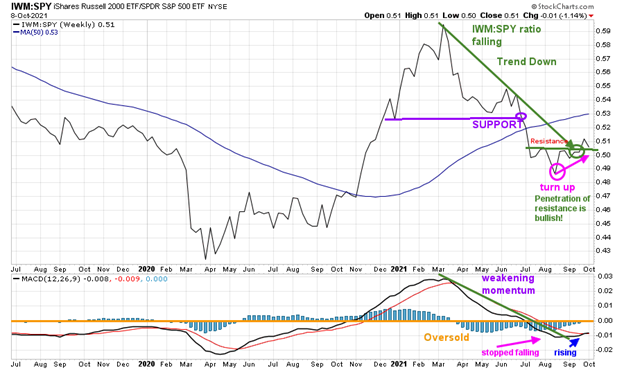 The IWM/SPY ratio turned up the prior week but turned down last week, remaining above August resistance and breaking the March downtrend (green circle).
The lower chart IWM/SPY MACD ratio no longer falling and starting to rise implies IWM is likely to be stronger than the S&P. 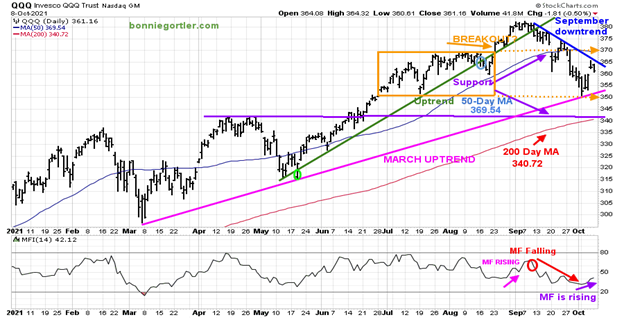 QQQ remains in a short-term downtrend from 9/7 (blue line) for now but appears ready to move higher. It would be positive if QQQ could break the September downside trendline (blue line). Resistance is at 365.00 followed by 370.00. The upside objective remains at 390.00 unless QQQ closes below 350.00.

Notice the shift in money flow from falling (redline) to rising (blue line). Money flow rising is bullish, implying that investors have started rotating into growth stocks that have been out of favor. It will help if 10-Year US Treasury yields stop climbing in the near term. 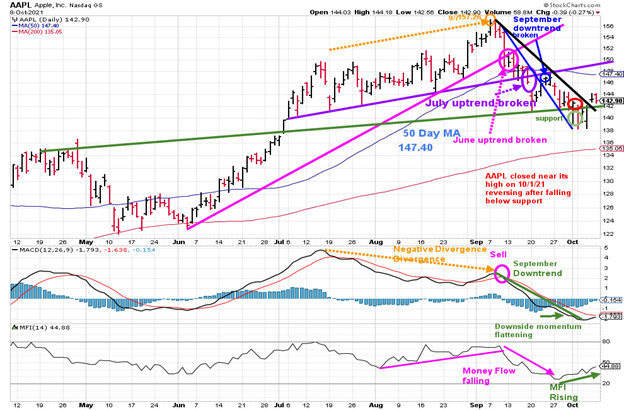 Apple (AAPL) peaked on 9/7/21 at 157.26 (orange circle). AAPL then declined to fall below its June uptrend (pink circle) and below its 50-day moving average later in the month, where it remains in October.

AAPL broke its short-term September downtrend (blue line). However, it failed to close above the 50-Day MA or above the July uptrend (purple line) and continued lower.

AAPL last week had better tape action, closing toward the upper range of the week at 142.90, up 0.18%. Its positive AAPL closed above old support at 141.00 and above the September downtrend (black line) with rising money flow. Earning will be announced on 10/28/21.

A helpful simple indicator to watch now is the CBOE Volatility Index (VIX), a measure of fear. VIX rose early in the week on the decline but did not make a higher high than 9/20, closing at 18.77.

A close above 23.00 would imply intraday volatility to increase and a higher risk the decline will accelerate. In contrast, a close below 16.00 would suggest a potential rally toward the highs will occur in the near term. 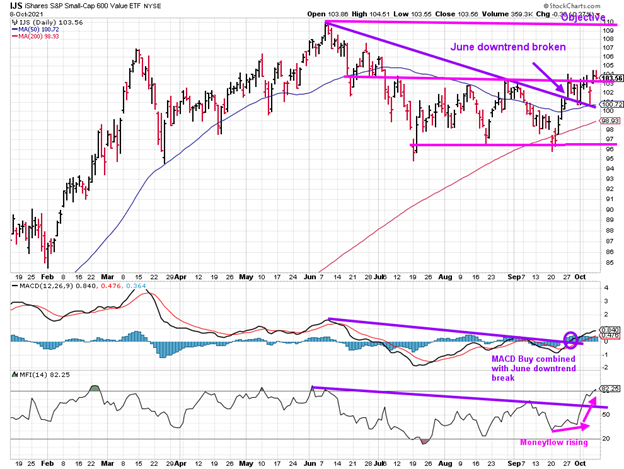 The iShares S&P Small-Cap 600 Value ETF (IJS) tracks an index of small-cap US stocks that provides exposure to the US small-cap companies that are considered undervalued by the market relative to other companies. The top sectors are Financials Consumer Cyclicals and Industrials.

MACD is on a buy, gaining momentum above the June downtrend. Its positive money flow broke the June downtrend and continues to rise, closing at its highest level since June. Look for IJS to outperform S&P 500 in the coming months. 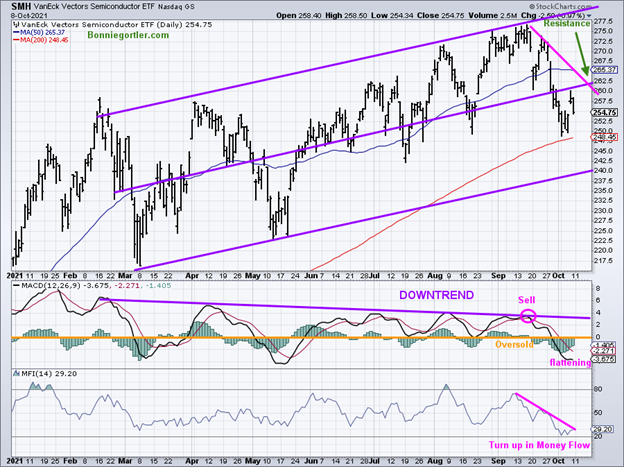 For technology stocks to have a sustainable rally, the Semiconductors (SMH) need to show leadership, starting with breaking the September downtrend (pink link). Next close above 262.50 resistance and then close for two days above the 50-day moving average now at 265.37.  The final confirmation of price would be SMH stronger than the QQQ.  It’s positive that MACD (middle chart) has flattened, and money flow has turned up.

The Dow had its second rise in the past six weeks. Volatility remains high as the battle between bulls and bears continues. The short-term momentum patterns are improving, implying the next move will be higher. However, there is no confirmation yet heading into the most favorable time of the year. The market has survived inflation, rising yields, debt crisis, employment reports, rising energy prices, and supply chain problems. Earnings season begins, including some of the largest banks its next challenge.  Watch Semiconductors and Technology, which have been lagging in showing leadership in the near term to excite the bulls to buy stock and ignite a rally towards the old highs.