The Risk in Growth Stocks With No Earnings Remains

Two of the eleven sectors rose, with nine sectors performing worse than the SPDR S&P 500 ETF Trust (SPY) up +0.04%. Energy (XLE) and Communication Services (XLC) were the leading sectors, while Consumer Discretionary (XLY) and Real Estate (XLRE) were the weakest, states Bonnie Gortler of bonniegortler.com.

International markets, including China (FXI) and Emerging Markets (EEM), were the big winners continuing to improve in relative strength. Semiconductors were strong, while Biotechnology and Transports were weaker than Nasdaq and the S&P 500.

Watching new lows on the New York Stock Exchange is a simple technical tool that helps awareness about the immediate trend's direction. New lows remain below the previous peak of 280 made on 11/30, however, they increased last week above 150 in the high-risk zone, closing at 199 (red circle). Learn more about the significance of my book, Journey to Wealth. Here is an excerpt, "If the new lows are above 50, it is an alert or warning of possible market weakness or a change in market tone. Be aware, it's a good idea to make sure you are happy and comfortable with your portfolio. It is best not to have more volatile investments than you can handle where you feel uncomfortable. If the selling continues, you could have serious losses if the market falls further. When new lows are above 150, the market is negative, higher risk, selling is taking place. Sometimes it could be severe, and sometimes on a very nasty day, you can have 'panic selling,' and big wild swings (high volatility) to the downside may occur. If new lows remain above 150, it will signify caution is needed and potentially a sharp decline in the near term. On the other hand, if news lows on the NYSE fall between 25 and 50, it would be positive. For now, the risk is high, and expect elevated intraday volatility."

The daily Nasdaq AD-Line broke the June downtrend (purple line), peaking in November 2021, and then turned down, breaking the October uptrend (blue dotted line). Then the August uptrend (orange line), an advanced warning a decline was forthcoming. The first downtrend was broken (green line) in late December 2021, but failed to gain enough strength to break the November downtrend (blue line). Market breadth continues to be weak in 2022, despite the Nasdaq only falling -0.28% for the week. The daily Ad-Line continues to make a new low (red circle), with no sign of changing. The risk in growth stocks with no earnings remains, and more time is needed to imply a bottom has formed. 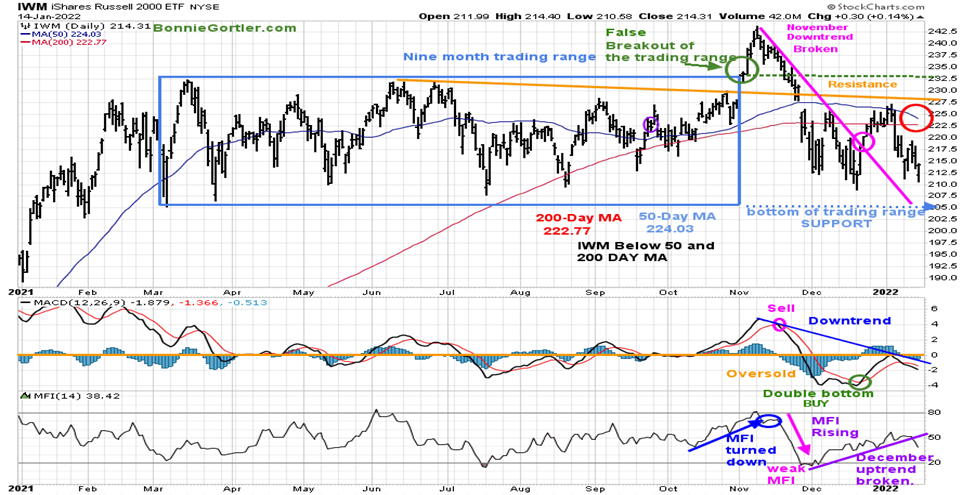 The top portion of the chart is the daily iShares Russell 2000 Index ETF (IWM), the benchmark for small-cap stocks, with a 50-day moving average (MA) (blue line) and 200-day moving average (MA), that traders watch and use to define trends. A false breakout occurred in IWM after being in a nine-month trading range in November. IWM broke the November downtrend but could not get above resistance and turned lower. IWM closed down last week -0.81%, closing at 214.31, near its high of the day on Friday. However, IWM remains weak, closing below its 50 and 200-day moving Average (red circle), favoring the bears. Resistance is 220.00, 222.00, 228, followed by 232.50. Support is between 205.00 and 210.00. A close below 205.00 would be bearish and increase the risk of an immediate accelerated decline. MACD (middle chart) remains on a buy just missing rising above zero, or MACD would be on a sell. MACD is falling and failing to get above zero, showing weak momentum. Money Flow (lower chart) is falling, and the December uptrend was broken, both negative. Risk is high until MACD stops falling, turns up, and penetrates the downtrend (blue line) confirmed by rising money flow.

The chart shows the daily Invesco QQQ Trust (QQQ), an exchange-traded fund based on the Nasdaq 100 Index with its 50-day moving average and 200-day moving average. In June, QQQ was in a trading range (orange rectangle), followed by a breakout that failed in late September. After breaking the short-term downtrend, QQQ rallied in October (blue line), and continued to climb in November, barely missing its upside target of 410.00 on 11/22 with a high of 408.71 before reversing lower. In December, QQQ failed to make a new high and broke down below the first support at 390.00 and below the 50-day moving average. QQQ recovered to close above 370.00 (pink line) at 380.01 after penetrating the March uptrend for the first time. Support is 370.00, a vital area that needs to hold. Resistance is at 390.00 395.00, followed by 400.00. A close below 370.00 would shift the trend to down, likely increasing more selling in Nasdaq to 365.00 and potentially to 350.00, a test of the October 2021 low. The lower chart is MACD (12, 26, 9), a measure of momentum. MACD flipped to a sell the first week of January (pink circle), remains in a downtrend and falling (black line). There are no signs of diminishing momentum, with MACD making a lower low than in December. Watch for MACD to begin to flatten and then turn up, followed by a break of the November downtrend. When this occurs, it will signify that the short-term selling will likely be complete.

Intermediate-term in Jeopardy of Shifting to Negative 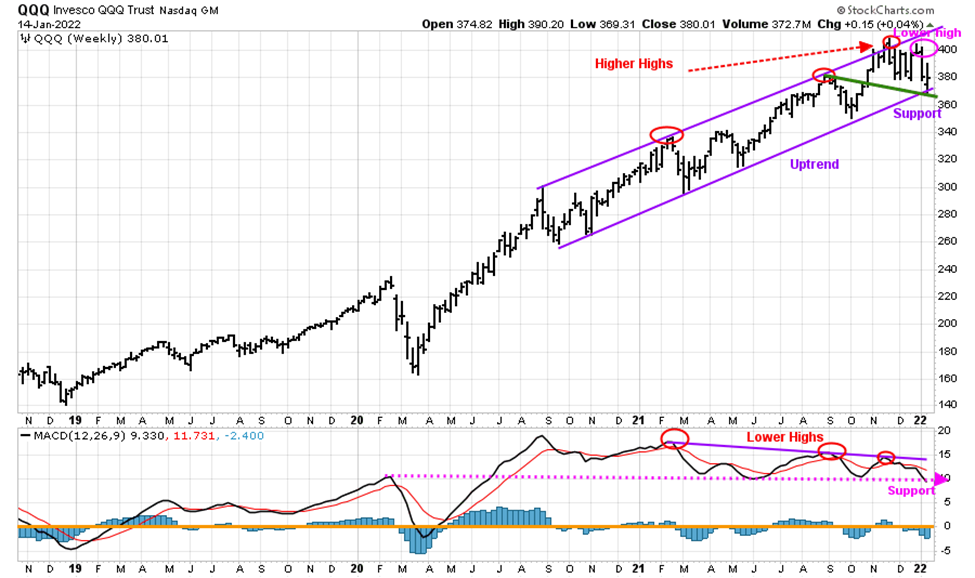 The top chart shows the weekly Invesco QQQ Trust (QQQ) has been in an intermediate uptrend since September 2020 but is now in jeopardy. QQQ made higher highs, peaking in November (red circles), but failed to make a new high in December and has turned down. QQQ fell to the lower channel during the week, holding support at 370.00 (green line) and reversed higher. A weekly close below 370.00 would break the uptrend and shift the trend to down. MACD (lower chart) remains on a sell, making lower highs, weakening momentum, forming a negative divergence (price high unconfirmed by MACD, which is making lower highs). With the decline, MACD is now at a critical support area holding since February 2020 (pink dotted line). Further weakness in QQQ would give a potential downside objective to 320.00, a decline of -15.8%. 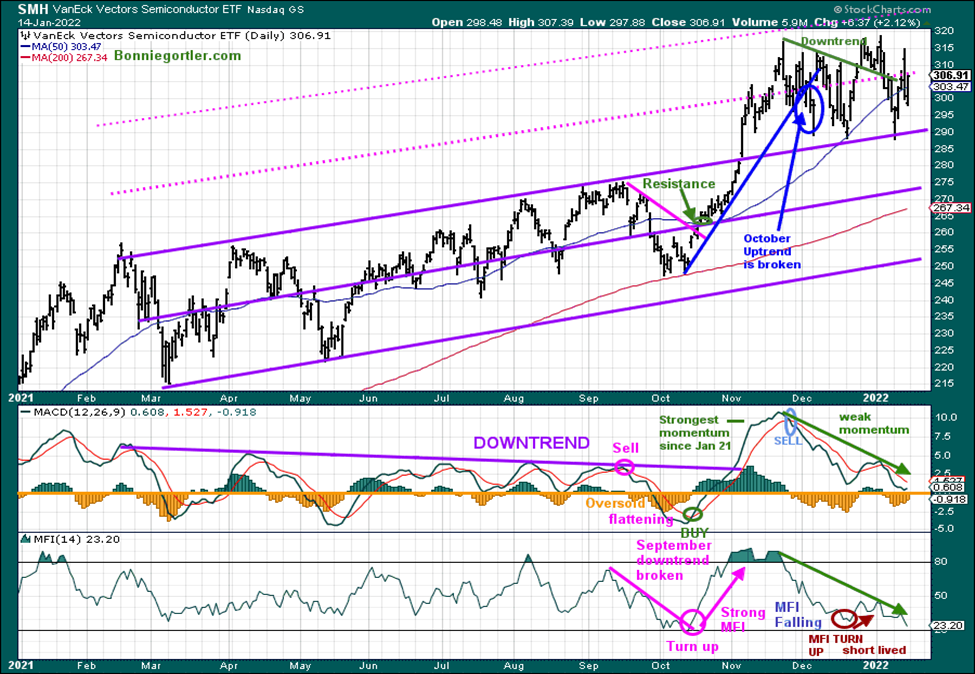 In a volatile week, SMH closed near their upper range last week, gaining back almost all their loss from the previous week up +3.37%, closing at 306.91. Support is at 303.00, followed by 290.00, followed by 275.00. Resistance is at 312.00 and 320.00. MACD (middle chart) remains on a sell after strong momentum in November and has worked off its overbought condition. MACD is falling close to resetting, going below zero for a potential fresh new buy after a turn-up. Money flow (lower chart) is in a downtrend (green line) and oversold. A turn up in Money Flow and MACD breaking the downtrend together would confirm continued strength in SMH. Keep an eye on NYSE Market breadth for a clue to short-term direction.

The NYSE A/D line made a new high on 11/8/21. In December, the AD line broke the November downtrend (brown line) and is no longer rising, and it did not make a new high. Without a new high in the AD Line soon, this would be a warning of a pending correction forthcoming in the NYSE. The lows made in July, August, September, and December are essential to hold (blue circles). 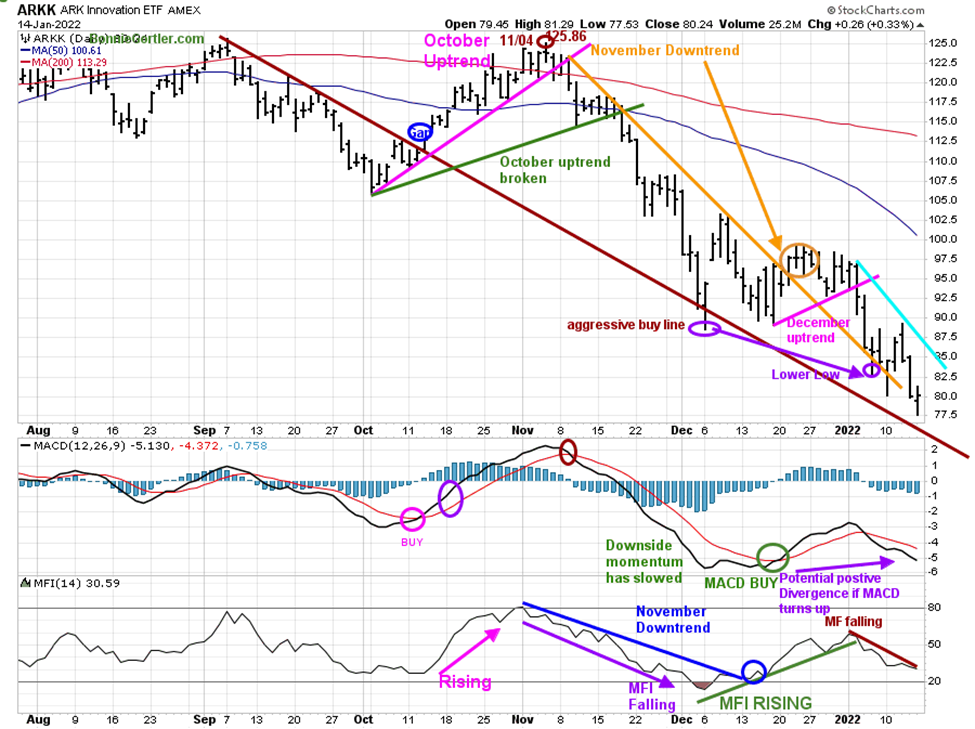 ARKK is an actively managed ETF by Cathie Wood that seeks long-term growth. ARKK broke its September short-term downtrend (brown line) in October and gapped up (blue circle), followed by a failed rally peaking at 125.86 on 11/04. Once ARKK fell below support at 94.00, it broke through the December uptrend (pink line). With selling in growth stocks continuing, ARKK continues to accelerate lower, falling again down -4.95% last week, closing at 80.24. ARKK is worth watching again this week to see if ARKK can stabilize and begin to rise even if the broad market weakens, as a sign that traders are stepping into buying growth stocks. MACD remains on a buy, but MACD never made it above zero, implying weak momentum after being extremely oversold. A potential favorable positive divergence exists in MACD, so be alert to a sharp, quick turn when a shift in trend occurs. Money flow (lower chart) broke the December uptrend but weakened in 2022. Short-term resistance is 85.00, followed by 90.00 and 95.00. An aggressive buy area is 77.00 (brown line), not traded there since July 2020. ARKK remains high-risk, volatile, with the bears in control. 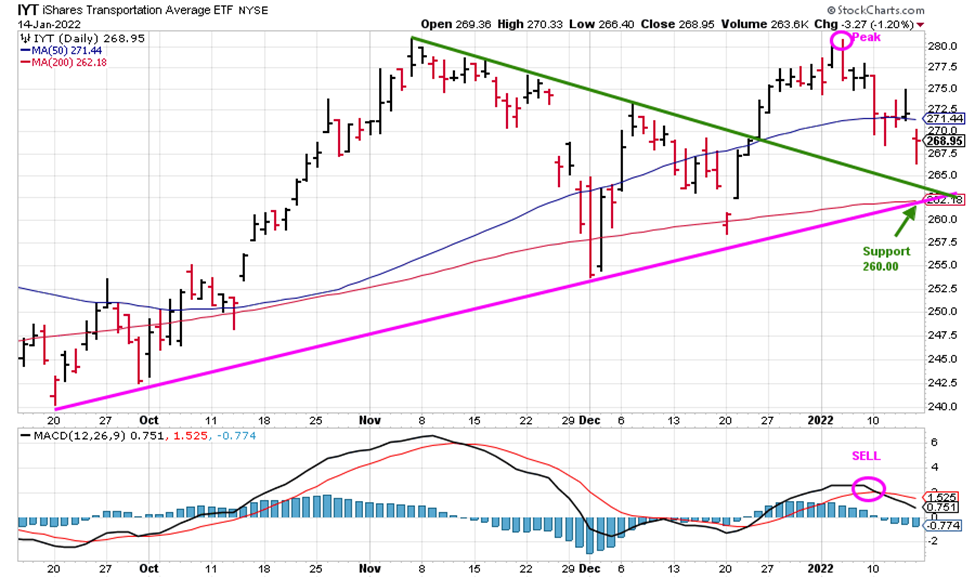 The Transportation Average (IYT) peaked on 1/5/22 at 280.87 and turned lower. Last week the decline accelerated, and IYT was one of the weaker averages, down -2.77%. Support is at 262.00. A close below would break the October uptrend and shift the short-term trend to down, and be considered negative for the overall market.

A Quick Update on the Two Leading Sectors in 2022

Financials pulled back after the start of bank earnings released last week. With yields rising, growth stock under pressure, investors rotate heavily into the Financial (XLF) sector. Last week, after gapping up to start 2022, XLF fell -0.83%, closing at 40.83, holding above first support at 40.00. Next support remains at 39.00, and resistance is 41.50, with an upside target is 43.00.

Summing Up: All major averages finished lower. Many market sectors have started in 2022 lower, and if you're not in the right market sector, you are losing money, especially growth stocks. Market breadth on both the NYSE and Nasdaq continues to be concerning. Momentum patterns are weakening. The Transportation average is weak. Improving market breadth is needed for a broad sustainable rally to develop. The intermediate trend is in jeopardy. A close below 205.00 for the Russell 2000 (IWM) and a close below 370.00 for the Nasdaq (QQQ) would be bearish and increase the risk of an accelerated decline broadening and increasing daily volatility and risk. Remember to manage your risk, and your wealth will grow.

I would love to hear from you. If you have any questions or comments or would like to talk about the market, email me at Bonnie@Bonniegortler.com Disclaimer: Although the information is made with a sincere effort for accuracy, it is not guaranteed that the information provided is a statement of fact. Nor can we guarantee the results of following any of the recommendations made herein. Readers are encouraged to meet with their own advisors to consider the suitability of investments for their own particular situations and for determination of their own risk levels. Past performance does not guarantee any future results.