I am watching the action in both the stock and bond markets as both are signaling that a potential change in trend may be in the offering, states Joe Duarte, editor of In the Money Options.

The Federal Reserve, the US government, and the general public are expecting the current events in the markets and politics to unfold at a traditional pace. That’s a mistake.

Because as I describe below, traditional forces which govern the pace at which situations unfold are no longer in charge. In fact, I am expecting a further acceleration in the market’s volatility as the MELA system responds to the Fed’s interest rate increases and its corresponding downstream effects. And although that sounds bearish, there may be a silver lining, which is that it could all end quickly.

Therefore, investors should remain vigilant for both an acceleration of the downdraft in stocks as well as a potential reversal when the Fed signals that it will once again lower rates and restart its QE exercise.

Something interesting is happening on the fringes of the MELA system; Job cuts—remember them?

Well, it looks as if they are starting to come back. CNBC reported that tech companies, including Uber, and Meta are starting to cut back on their hiring. Moreover, online used car dealers are presently laying off a significant number of workers.

For example, online car dealers Vroom (VRM) and Carvana (CVNA) with the latter laying off 10% of its workforce while management has announced it won’t be getting paid for the rest of the year.

Now, I’m not about to rush out and buy the shares of either company, even as they both seem to be on an eternal dip. But someone did, as the market at least initially applauded VRM’s job cuts. And what that says is that we may be on the verge of a wave of similar announcements as companies start tightening their belts in response to the Fed’s interest rate hikes.

In fact, as the chart below shows, this trend may only be gathering steam as the monthly Challenger Job Cuts number is starting to rise.

Remember, the MELA system is comprised of the stock market (M), the economy (E), people’s life decisions (L), and artificial intelligence (A). When the stock market is rising people are more confident about their future as their 401 (k) plans, their IRAs, and the crypto and currency accounts are flying high.

In other words, as long as households are in positive cash flow—whatever is left after paying expenses and debt—they can spend freely, knowing their future is in good shape. So, if job cuts start to gather steam there will be two hits to the cash flow fueled MELA system. First, the future pillar (retirement and trading accounts) fueled by the stock market will suffer as stocks fall and the monthly/quarterly contributions from work will stop. And second, the current anchor, job income will disappear, thus creating a double whammy to the pocketbook.

Of course, the bottom line will be decreased spending, which then leads to lower corporate earnings, which in turn will fuel further falls in the stock market as companies miss estimates. Indeed, according to recent data, doubt is already creeping into the MELA system.

Events Will Unfold Swiftly Because the Algos are in Charge

Perhaps the most underappreciated component of MELA is the two-fold role of artificial intelligence (AI).  First, there is the side we don’t see, the corporate decision-making algorithms. These are based on sets of commands fueled by the simple phrase: "If this happens, do this."

So, the machines that count the money and keep the books for huge corporations are programmed to at least make recommendations to management as to among other things, when to make adjustments to payrolls based on revenues and a host of other variables.

The visible side of AI is that of the 24-hour news cycle and social media. Here we see that any news travels rapidly and is dispersed to larger audiences everywhere. In turn, people respond to news rapidly. Remember how quickly the toilet paper shortages developed during the heights of the Covid pandemic? Thank the news and social media.

Yes, what used to take weeks to months now can happen in hours to days. What that means is that when the job cuts hit, the MELA system will respond rapidly. Just ask anyone at any of the following high-profile companies listed here among others:

As a result, investors should:

Bond traders have the best noses in the world when it comes to sniffing out recessions. That’s because recessions kill inflation, which in turn means that the income produced from bond interest payments will go further. Remember, inflation steals purchasing power from bonds, which leads bond traders to sell during inflationary periods. 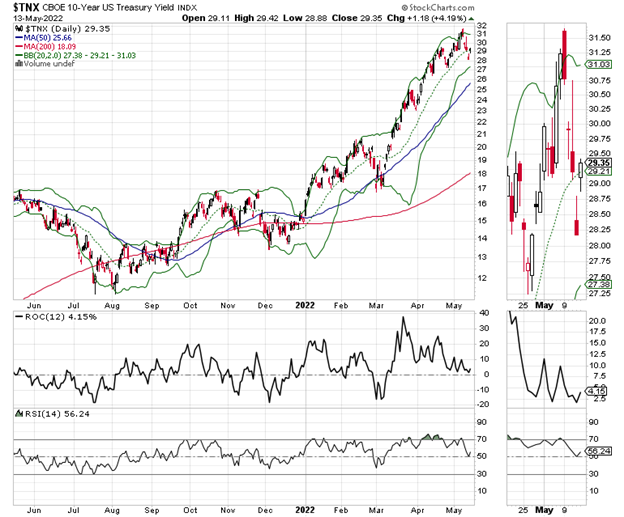 That selling, of course, raises bond yields, as we’ve seen in the US 10-Year Note (TNX) over the last few months. Now, this may be a coincidence, and it may not be something that lasts. But on the day that VRM announced the job cuts, bond yields reversed their recent climb and TNX fell below 3%.

That suggests that the uptrend in yields is now in question. Much will depend on how big the job cuts are, if indeed they gather steam,  how they affect the monthly payroll numbers, and what the Fed says or does in response.

Here is the bottom line. If TNX breaks below 2.75%, expect significant repercussions throughout all markets.

NYAD and VIX Back in Synch

The market’s bounce on 5/13/22 featured a return to VIX and the New York Stock Exchange Advance-Decline line’s (NYAD) inverse relationship, which had been absent for the past few weeks. A rise in VIX means heavy put volume which is negative for stocks, while a rising NYAD signals a healthy market.

This is a one-day event so far, but it may be bullish for stocks if it continues. 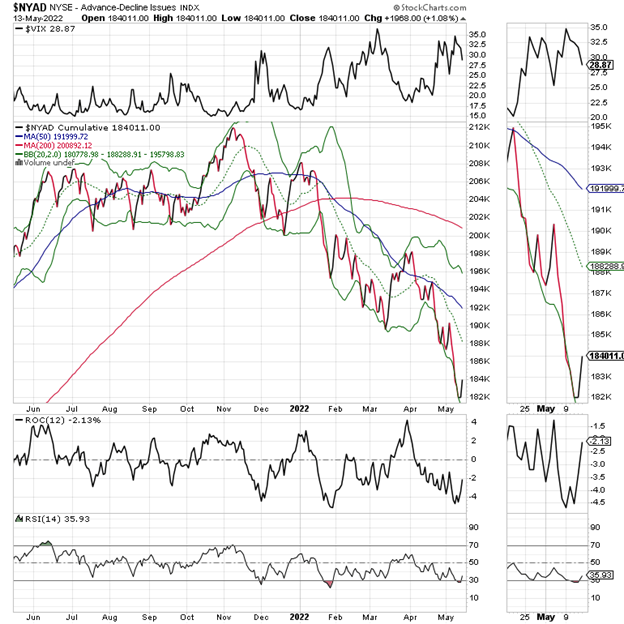 The S&P 500 (SPX) found support just below 4000 and now has resistance at 4100-4200. SPX is very oversold so this bounce could last a few days. But right now, it’s just an oversold bounce until proven otherwise. 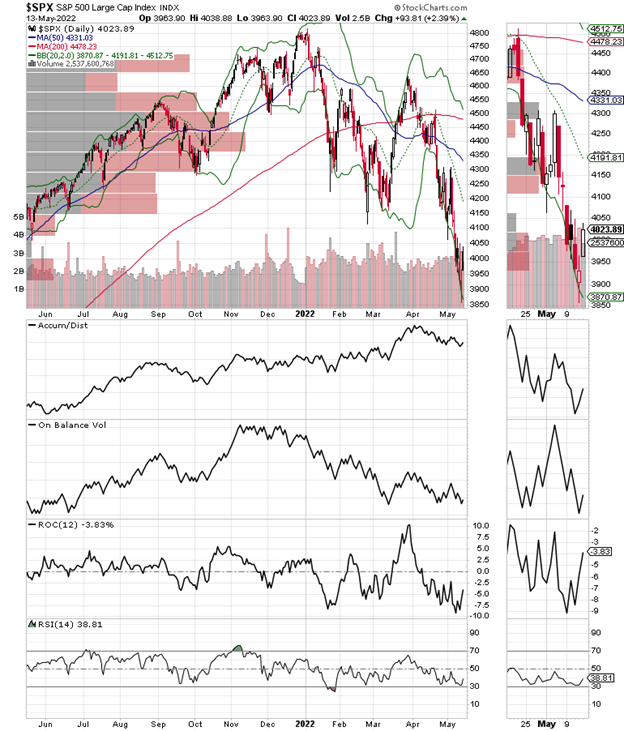 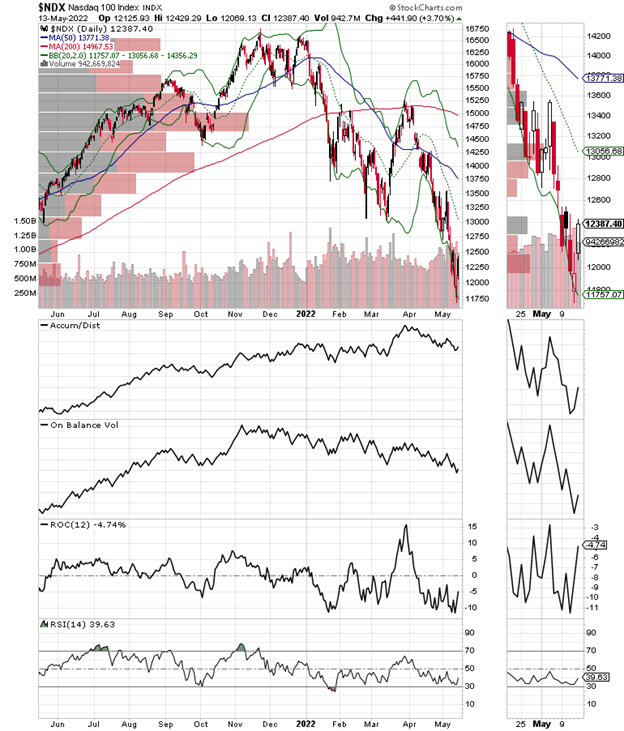