What Is the Correlation Coefficient and How to Use It in Forex Trading?

Many people who have some experience with Forex trading have come across the term ‘correlated currency pairs'. Now, this might sound rather a complicated term, however, the basic premise behind this is quite simple, states Konstantin Rabin of investfox.com.

Obviously, the cases of perfect correlation are very rare, and nearly in all cases, the relationship between the different currency pairs falls between those two extremes. Now to illustrate the case of positive correlation, let us compare two charts. Firstly, we can take a look at this daily GBP/USD chart:

As we can observe from the above diagram, three years ago, the GBP/USD pair was trading close to the $1.31 level. During the subsequent months, the British currency made some notable gains, eventually rising to the $1.43 level. However, those gains did not persist for long.

Since Spring 2018, the GBP/USD pair has entered into a long-term downward trend. Surprisingly enough, this downtrend has persisted for two years. As a result of those steady losses, by March 2020, the pair has fallen all the way down to the $1.15 level.

However, from that point, the British currency has begun to recover and by October 2020, has returned to the $1.31 level. So, as we can see in this example, the GBP/USD came in a full cycle during these three years.

Now, let us compare the above diagram, to this daily AUD/USD chart: 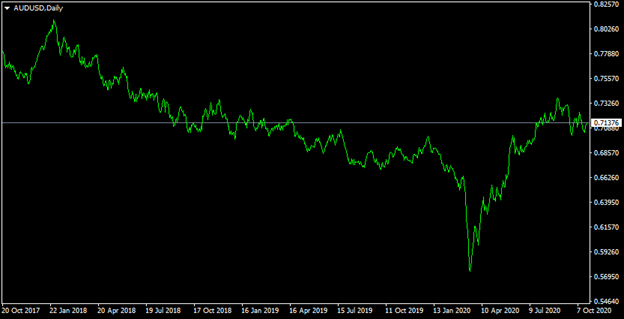 As we can see from the above chart, back in October 2017, the AUD/USD pair was trading close to the $0.79 level. During the subsequent period, the Australian dollar has made some notable gains and has risen to the $0.81 level.

Despite this increase in the exchange rate, since February 2018, the currency has settled for a long-term downward trend. Just like in the previous case this downward trend has persisted for at least two years, with the Australian dollar suffering steady losses along the way. As a result of those developments, by March 2020, the Australian dollar has fallen all the way down to the $0.57 level.

From that point forward, however, the Australian currency had a relief rally and regained some of its recent losses. Consequently, by October 2020, the AUD/USD pair now trades close to the $0.71 level.

So, as we can see from those two charts, the GBP/USD and the AUD/USD charts have gone through the same three cycles. There was an initial surge, followed by a long-term downward trend and then by a period of recovery.

It is not surprising that during the last 100 days of trading sessions the average correlation coefficient for the GBP/USD and the AUD/USD pairs is at 0.87. This suggests that there is a strong positive correlation between those two currency pairs. However, at the same time, it is worth noting that this does not represent the case of perfect correlation.

This is because as we can see from the correlation coefficient, as well as from the two charts above, there are times when those two currency pairs diverge from each other. 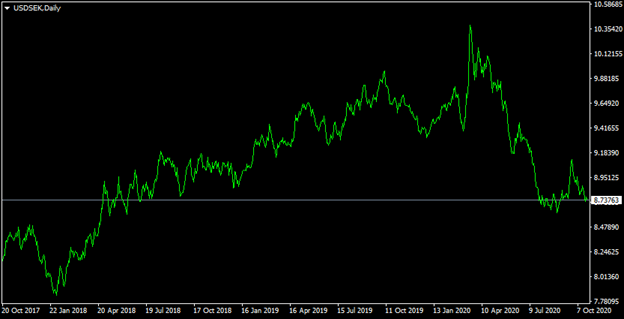 As we can observe from the above diagram, the USD/SEK pair was trading close to the 8.15 level. During the following months, the Swedish currency made some significant gains, as a result of which the USD/SEK exchange rate dropped down to the 7.80 level.

However, the US dollar quickly recovered from this setback and for the next two years has made steady gains, eventually going as far as rising to the 10.40 level by the end of March 2020.

At that time, the US Federal Reserve decided to reduce the federal funds rate down to the 0% to 0.25% level. This has essentially negated any advantage the US dollar had over the Swedish krona in terms of interest rates. Consequently, the Swedish currency started to regain lost ground and as a result, by October 2020, the USD/SEK pair has fallen to the 8.75 level.

So, if we compare the USD/SEK chart to the GBP/USD and AUD/USD diagrams, we can see that it represents some sort of reversion of those last two pairs. Consequently, it is not surprising that the coefficient between those currency pairs is -0.91.

How Traders Can Utilize Correlation Coefficient in Forex Trading?

The fact of the matter is that opening long or short positions with two highly positively correlated currency pairs can magnify the risk significantly, without traders even realizing it. This is because as mentioned before, those currency pairs tend to move in the same direction, so opening two long or short positions with those pairs, is only increases the risk exposure of the market participants, without bringing in any tangible benefits.

To avoid this, traders can check the correlation coefficients of different currency pairs and avoid opening positions with those, which have coefficients of 0.60 or higher. If the coefficient is at 0.50 or lower, then it suggests that the degree of correlation is simply too weak to have any meaningful impact on the market and therefore traders can still go ahead and open the same positions with those pairs, without expanding their risk exposure to a significant degree.

It is also worth mentioning that those risk management principles also apply to the highly negatively correlated currency pairs as well. This is because opening long and short positions with two highly negatively correlated currency pairs can also increase the traders' risk exposure, with no tangible benefits. So, to avoid those types of problems, traders can check the correlation coefficients between different currency pairs and avoid opening the opposite positions with ones, which have a strong negative correlation.

Use of Correlation Coefficient in Hedging Strategies

The use of the correlation coefficient is not only useful for risk management, but also it can be a handy tool for Forex hedging strategies as well. Those types of methods focus on reducing the risk exposure of the market participants regardless of the market conditions.

Traders can achieve this in two ways. Firstly, Forex traders can use hedging strategies by opening one long and one short position with highly positively correlated currency pairs. For example, we have seen that the GBP/USD and the AUD/USD pairs have a strong positive correlation. This means that if traders open a long GBP/USD position and a short AUD/USD position, then this can be an effective hedging strategy. This is because the losses with one currency pair are likely to be offset by the gains from another pair.

Traders can also open a short GBP/USD position and a long AUD/USD position for the same purpose and with the same likely result. So, this type of approach can reduce traders' risk exposure considerably. This is also known as the Forex correlation hedging strategy.

However, at this point, it is also important to point out that despite all of its advantages and uses, the Forex correlation hedging strategy cannot guarantee a 100% rate. This is because, as we have seen from the above, there are times when even some of the most highly correlated currency pairs tend to be diverse from each other.

This can happen for several reasons. It can be a direct result of interest rate decisions by one of the relevant central banks, or it can be the result of some political or economic event or some latest announcement. Consequently, it is important to realize that even some well-planned hedging strategies can fail from time to time. This is why it is important to have proper stop-loss orders in place to guard against large amounts of potential losses in those cases.

Correlation Coefficient as a Dynamic Indicator

At this stage, it is important to point out that the correlation coefficient is not some sort of static indicator, which remains constant for the same currency pairs for extended periods of time. Some currency pairs might become more highly correlated with each other over the years, while others might have a greater degree of divergence.

Therefore, over a long period, there can be a significant amount of divergence even for those pairs which have had a strong positive correlation for several years. One obvious example of this is the case of the Australian dollar and gold. Since the 1990s the value of AUD was closely tied to the prices of precious metals.

This is because Australia is one of the largest gold and silver producers and exporters in the world. Consequently, when the gold price rises, Australian companies tend to benefit from increased revenues. In addition to that, the Australian government also benefits from rising tax income. On the other hand, falling prices of precious metals hurt the Australian economy, due to understandable reasons.

However, this changes from the second half of 2019. The fact of the matter is that during this period the gold price started a long-term upward trend, eventually going as high as $2,000. So logically speaking this should have benefited the Australian dollar tremendously, since it represented more than a 50% increase in the gold price.

Yet, regardless of those expectations, the Australian dollar kept up with its depreciation. One of the main reasons for this is the series of interest rate cuts, adopted by the Reserve Bank of Australia during this period. As a result of this policy, Australian policymakers have reduced the key interest rate down to the 0.25% level. It is not surprising that such reductions have made the Australian dollar less attractive for traders and investors, hence its depreciation against the US dollar and other major currencies.

So obviously, during this period the correlation coefficient between the Australian dollar and gold price fell considerably. However, once the Reserve Bank of Australia had finished with its rate cut cycle, the Australian currency began to recover and its high degree of correlation with the gold price was restored. Therefore, as we can see from this example, the correlation coefficient is a dynamic indicator, which constantly changes depending on the circumstances.