Gold is the best investment in the world today and it’s poised to go much higher in the years ahead, asserts Mary Anne and  Pamela Aden, editors of The Aden Forecast— and participants in the upcoming MoneyShow virtual event, August 3-5. Register for free here.

We want you on board the gold train as it pulls out of the station. It’s also important to understand why you’re on board.

Gold is — and always has been — the world’s favorite safe haven. That is, during times of uncertainty, insecurity, economic or political upset, war, devaluations and more, gold has always come out as #1. And this impressive track record goes back more than 5,000 years.

In other words, there’s not one single item or investment that can come anywhere close to beating gold’s mega, long-term track record. Throughout history, gold has always maintained its purchasing power, and again no other investment comes close.

Gold is also global money. It’s known and accepted throughout the world. This too has been true for thousands of years. Plus, gold is durable and it’s beautiful, which has also made it superior to other mediums of exchange, like paper currencies. And it’s not backed by any government or central bank. It’s valued on its own merit.

These and other reasons are why gold has been desired over the cetturies. People have died for it, stolen it and hoarded it. That’s been the case, for example, going back to the ancient Egyptian pharaohs, who were buried with their gold, and during the Roman empire when they used gold as money, at least for a while when the empire ruled a large part of the world.

The Spanish conquistadores pillaged the New World, primarily in search for gold treasures, which they then stole by the tons and took home.

The California gold rush was another good example when people from all over the world dropped everything to chase the dream of striking it rich. And it’s been the same story in many gold rushes before and since then.

Following the Vietnam War, the refugees who escaped with some gold were able to easily find their way to a safe place and begin a new life. Many others were not so fortunate. And this too has happened in hundreds of countries all over the world.

These factors and many more are what makes gold so special, and it always will be. So how does this apply to what’s happening today? Everything! Here’s why...

Going back a few decades, gold started its current bull market in 1971 (see Chart 1). That’s when the U.S. dollar went off the gold standard, and gold and the dollar began trading in the free market. 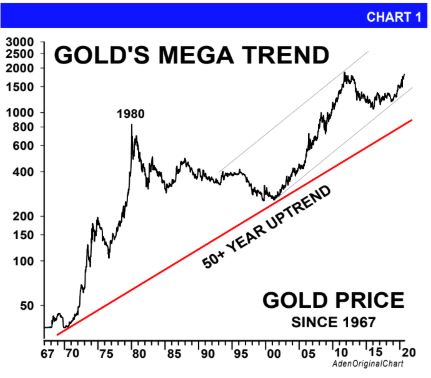 Prior to this, the gold price was fixed for several decades. But suddenly gold was set free, by breaking the Bretton Woods agreement and it began to soar.

It started out gradually but then the move gained momentum and in the following 10 years the gold price skyrocketed 2,329%, from $35 an ounce to $850. It then declined for about 20 years, until reaching a major low in 2001. This coincided with the end of the stock market’s tech boom and bust.

Interestingly, this also coincided with the early stages of Fed intervention. That is, Fed Chairman Greenspan at the time worked behind the scenes to prop up the stock market. And as Tom Dyson summed up, “that’s when the seeds of massive money printing were sown.”

This became openly obvious after the 2007-08 financial crisis. This crisis was so serious, it literally brought the U.S. economy to the brink, which caused government officials to make hard decisions, and fast.

This resulted in the Fed’s QE program and others, which essentially created tons of money out of thin air to save the economy and bring it back from the brink. All this excess money also boosted the stock market, saving it from a huge collapse.

This essentially cemented the Fed’s role as lender of first resort. And it became even more obvious in the next crisis, which happened this year due to the coronavirus and its aftermath, basically shutting down the economy and pushing it into a severe recession.

The Fed had already been lowering interest rates to near 0% for several years to help boost the economy. Other countries had been doing the same. Remember, this alone is a situation that has never happened in all of human recorded history, going back more than 5,000 years. But nevertheless, the virus triggered panic mode action and the biggest bout of money creation even seen in history.

Just this year, for example, the Fed has created trillions. To put this amount into perspective, it’s more than three times the amount spent in the years following the financial crisis. It’s also more than the money that was spent to pay for all of the U.S. wars combined... the American Revolution, Civil War, World War I and World War II. And it’s not over yet...

There’s no question the Fed is going to keep the printing presses going for as long as this recession lasts. And the amounts involved are going to be astronomical.

Not to be pessimistic, but with new Covid cases growing each day, and the virus is in an ongoing uptrend, it looks like the situation is going to get worse and last longer than originally anticipated. This reinforces that the Fed will keep pumping money out for as long as it has to, which could be for years.

This in turn is essentially what’s driving the current bull market in gold, which actually started in 2015. Since then, the Fed has been accommodating, but now it’s going all out. Other central banks around the world are also piling on the debt and this nearly guaranties that gold will keep rising in the years to come.

First, gold is in big demand and it has been for a few years now. This will keep upward pressure on gold. And once inflation picks up, thanks to all the money that’s being printed, it’ll make gold even more appealing.

Second, the U.S. dollar is set to decline a lot further and resume the drop that’s been in force since 1971. As it does, this will also provide more fuel for gold’s bull market. And since gold just hit a new high, its next target is the record high, which it’s rapidly closing in on at $1917!

Once gold hits new record highs, sky’s the limit. If this bull market unfolds like the previous ones did, the gold price could ultimately soar to the $7,500 or more.

We know that may sound crazy, but it’s happened before, and it could happen again. That’s even more so the case considering we’re in uncharted waters and these are unprecedented times. But regardless of where gold ends up, the main point is, gold is the very best investment in today’s environment.

It’s poised to outperform stocks and bonds, and it’s where you want to be. It’s not too late. We believe the big exciting up moves lie ahead, in the months and years to come. So again, there’s still time to get on-board and we hope you do, if you haven’t yet joined in.

We want all of you to be on-board by buying gold, silver and some of their shares. It’s not too late and when we have a downward correction, that would be the ideal time to buy or add to your positions. Among our core holdings are SPDR Gold Trust (GLD), Gold Miners ETF (GDX) and Silver Trust (SLV).

Our gold and silver shares are doing well with many at new highs like Pan American Silver (PAAS), Yamana Gold (AUY) and Wheaton Precious Metals (WPM).

But not all juniors are created equal and some are to be avoided. A good place to start to own junior gold issues is our recommended position in Junior Gold Miners ETF (GDXJ).