Politics and Profits: Assessing Stocks and the Election

Will the stock market affect the outcome of the election? And which is better for the stock market — a Democratic or Republican president? asks Jim Stack, a top-ranked boutique money manager with a "safety-first" investment philosophy, a noted market historian for 4 decades, a contributor to MoneyShow.com and the editor of InvesTech Research.

Over the past several months the coronavirus pandemic and economic shutdown have been the center of attention for the media and politicians alike, while the upcoming election has played second fiddle.

However, presidential candidates should probably be watching the partial recovery and stock market rally more closely.

Historically, the market’s performance in the three months leading up to a Presidential Election has displayed an uncanny ability to forecast which party — the incumbent or the challenger — will win the White House.

Since 1928, there have been 23 Presidential Elections, and in 14 of them, the S&P 500 moved higher during the three months preceding Election Day. In 12 of those 14 instances, the incumbent president or party won the presidency.

Conversely, when the S&P 500 fell over that three-month period, the incumbent party lost. There have been only three exceptions to this correlation, and those were in 1956, 1968, and 1980. As a predictive indicator of the presidential race, the stock market can claim an impressive 87% success rate!

Admittedly, the 3-month pre-election gain or loss can be minute, as it was in 1976, but there is a logical explanation behind the association. The stock market typically reflects the economic outlook in the weeks leading up to Election Day. 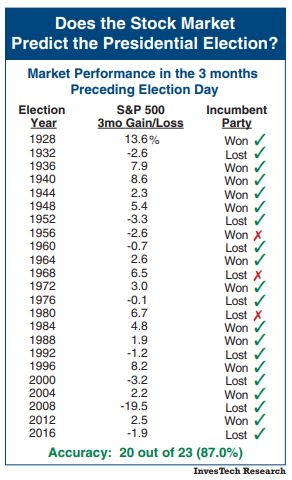 A rising market indicates an improving economy, which means rising confidence and an increased chance for the incumbent party to retain the top office. In other words, people tend to vote their pocketbooks.

Starting August 3, your time may be better spent watching the health of the stock market and the indicators in this issue than the presidential debates if you want to know who will be president for the next four years.

Which is better for the stock market — a Democratic or Republican president?

This is a hotly debated topic, and the answer is… It depends! The reason this response is so nebulous is that by carefully selecting the period to be studied, the results can be (and often are) subject to manipulation.

When InvesTech Research was started in 1980, it was widely recognized that the market flourished under Democratic Presidents far more than under Republicans.

From 1928 to 1980, the average annualized return when a Democrat held the Presidential office was more than four times greater than under Republican Presidents: 12.0% to 2.6%. This was purportedly because Democrats favored higher government spending, which stimulated the economy.

Then by 1992, after 12 years of superlative stock market performance under Ronald Reagan (R) and George Bush, Sr. (R), the tables had shifted. If one is selective in choosing the starting point (e.g., 1952), it could be argued that the stock market showed a slight preference for Republican Presidents.

After the “irrational exuberance” of the 1990s under President Clinton (D), and the unfortunate aftermath of two valuation bubbles (stocks in 2000 and housing in 2007) under President Bush (R), the performance pendulum had swung back in favor of Democrats.

Over the past decade, President Obama (D) presided over 8 years of stock market recovery coming off the most oversold level in 75 years, and President Trump’s 4-year Republican administration has extended that rally. As a result, the total market performance from 1928 until today has improved for Republican Presidents, but still favors Democratic Presidencies by nearly a 2:1 margin.

Yet, the more one analyzes history and the factors underlying these statistics, the less important they seem. The argument that Wall Street prefers one party over the other can be made either way depending on the time frame studied. As shown over the last decade, the stock market can perform well regardless of which party occupies the White House.

Is Political Gridlock Over-Rated?
4 hours ago