Five ETFs Poised for a Shift to Value 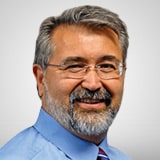 Unless you’re an old-timer like me, you may not be familiar with Benjamin Graham. But he was the most important influence on Warren Buffett’s investment strategy, notes Tony Sagami, contributing editor of Weiss Ratings Daily Brief.

Graham was the pioneer of value investing, which looks for securities that are priced relatively low based on their intrinsic worth. In short, value investors look for cheap stocks of good companies.

Now, I am an old-timer, so I’m going to quibble a bit here. One of the concepts I vividly remember from college lectures — which was reinforced by my early professional mentors — was to focus on tangible assets as key metric for understanding value.

OK, let’s back up a bit. There are two types of assets: Tangible and intangible. Tangible assets are physical things like cash, inventory, vehicles, computer equipment, factories, machinery, real estate and investments. 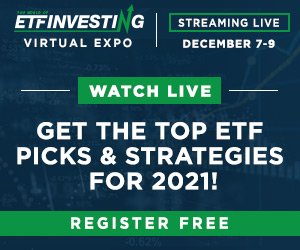 Intangible assets do not exist in physical form. They include things like accounts receivable, copyrights, patents and — one of the most blatantly abused accounting concepts — goodwill.

I was taught that tangible assets are the backbone of a company's business because they provide the means by which companies produce their goods and services and get them to market.

For example, without delivery trucks, United Parcel Service Inc. (UPS) couldn’t deliver packages this shopping season. That’s why, when I look at a company’s balance sheet, my eyes zoom in on tangible assets.

However, like us old-timers, tangible assets have been going the way of the dinosaur. In fact, I’d say corporate balance sheets these days resemble nothing more than puffy clouds of hope rather than hard, unmistakable evidence of commerce being done. 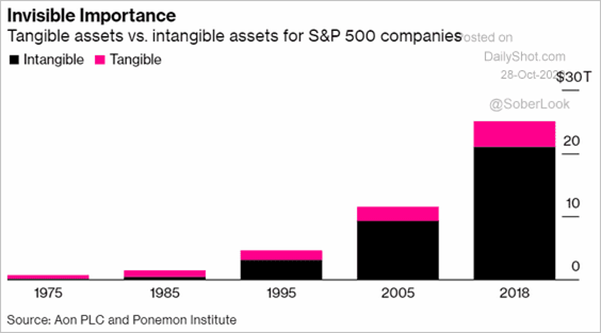 That’s the story this chart tells me. It shows that, since I entered the investment business in the mid-1980s, corporate balance sheets have done a complete 360. They’re now overwhelmingly comprised of intangible assets.

That’s true across the board, but it’s especially true in entertainment, technology and consumer discretionary stocks. Think about Alphabet Inc. (GOOGL) and its primary operating unit for a moment.

Sure, Google owns office buildings all over the world, an army of computer hardware and net tangible assets of $178 billion (at the start of this year). And yet GOOGL has a market cap of $1.2 trillion.

Warren Buffett does not own GOOGL, and I’m quite sure Benjamin Graham would have considered the online search and advertising giant to be grossly overpriced.

GOOGL is a “growth” stock, and it’s been a huge winner. But that doesn’t mean it’s worth owning today. In fact, a growing number of experts think we’re on the verge of a monumental rotation from “growth” to “value” stocks.

Here are some value-focused exchange-traded funds that would benefit from such a move. Proponents of a value-focused approach —  like Benjamin Graham — would certainly approve of these ETFs.