What's Ahead for the US Dollar? Ask the Adens

The U.S. dollar bounced up this past month, reaching a two month high; we consider this a rebound within a bear market, explain Mary Anne and Pamela Aden, market and currency experts and co-editors of The Aden Forecast.

The dollar was boosted higher by several factors — mainly, positive sentiment that the economy will likely recover sooner rather than later. Basically, the dollar likes the uptick in long-term interest rates, the big stimulus package and more spending.

It likes Janet Yellen and the direction the Biden administration is taking, at least for the time being. This applies not only to the economy but also to the covid response, the renewal of diplomatic relations with traditional allies and the fact that action is happening on many fronts.

Overall, global sentiment is that the U.S. is back and that’s been good for the dollar. In fact, the dollar could rise further in the weeks ahead and if it does, it would not be unusual. Remember, the dollar fell about 13% over the past year or so.

Following a decline of this magnitude, it’s not abnormal for any market to then experience a rebound rise. But if the major trend is down, which is clearly the case for the U.S. dollar, then the rebound rise will be temporary. And once this rise is over, the major trend will again take over, pushing the dollar down to new lows. That’s what we think is going to happen and it’s clearly illustrated on the chart below. 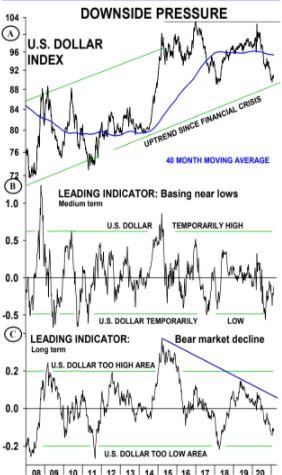 The Big Picture for the Dollar

First, you can see the dollar index held near its 2018 low. In other words, this support held and the dollar’s bouncing up from there. This means the dollar index could now keep rising up to possibly its moving average near the 95-95.50 level, but it would still be bearish.

Once it starts to decline again, however, it will not show real renewed weakness until its declines and stays below the 2018 support low. The leading (medium-term) indicator is reinforcing this scenario (see chart above).

Note that it’s rising from a “temporarily low” level and it has room to rise further before it gets near the high area. This tells us the upside is currently open for the weeks ahead. But as you know, the long-term leading indicator is the most important (see chart above). It’s clearly on the downhill slope and it’s not yet at the “U.S. dollar low area.”

This confirms the dollar is indeed headed lower once this rebound rise is over. When that happens, and as we’ve said many times, this bear market could take the dollar down to new record lows.

Our guess is that this will also probably coincide with an inflationary environment… not yet, but looking out to the long-term. If so, it’ll be the result of the truly unprecedented money creation that’s been ongoing since September, 2019.

You’ll remember that’s when the repo problems surfaced in the banking system and the Fed went all out “printing money like mad” and buying massive amounts of bonds to ease these financial pressures (see chart below). 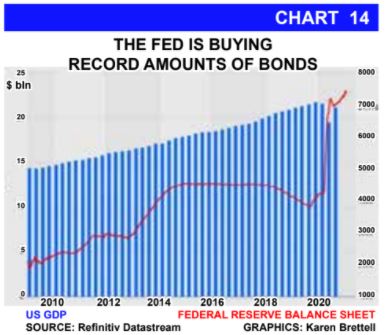 At the time, we thought it was a big deal. But it proved to be a drop in the bucket compared to what ended up coming due to covid. The printing presses then went wild, and even though many experts feel this doesn’t really matter and it’ll be okay, history tells us otherwise.

Massive money creation is, and always has been, the cause of inflation... Then why didn’t it happen after all the money creation following the 2008 financial crisis? We don’t know, but our best guess is that the deflationary drag was so strong at that time, it overpowered the inflation pressures.

It was unusual but we don’t think that one example means it’s always going to be that way. More likely, we’ll see at least some inflation and it could end up being stronger than anyone thinks. We’ll see, but if this coincides with a falling dollar, it could indeed fuel the inflation fires.

For now, the currency markets are taking a pause, some more than others. This is normal. They’re taking a break and/or correcting during this time when the dollar’s rebounding. Once it’s over, the currencies will resume their up moves.

So if you’re currently holding the currencies we’ve been recommending, keep them. And if you haven’t bought or would like more, this pause is providing a good opportunity to buy. So far, you can see that the Australian dollar has been the strongest.