Alaska Air: Coming Out of a Tailspin?

The company (which includes the Alaska Air and Horizon Air brands) had over 1,300 flights a day in 2019, prior to the pandemic, serving 115 destinations in the U.S., Mexico, Canada, and Costa Rica.

Alaska Air’s main hubs cities are Seattle, Los Angeles, and San Francisco, all desirable markets for domestic flights as well as for making international connections to U.S. destinations. The company’s revenue grew nearly 50% from 2016 to 2019, due in part to a merger with Virgin America Airline in 2016.

Like all airlines, Alaska’s business has been in a tailspin because of the pandemic — Q4 revenue was down 64% and, even after grounding a bunch of planes and cutting back on routes, its flights were just 45% full!

However, as with all its peers, the market is looking ahead to better times — possibly boom times — in the quarters to come. Even in Q4, the firm was able to raise its fares a bit (2%), while the industry as a whole saw prices sink 18%.

Now, it’s broadening its reach as it anticipates a strong travel recovery, adding a bunch of new routes in the past couple of weeks (again, mainly out of the west coast), while industry-wide metrics continue to improve and bookings point to good things down the road.

Analysts see revenues booming 67% this year and another 39% in 2022, while the loss improves this year and the company surges back into the black next year. And, usually the way these things go, those estimates will prove conservative after major cost cuts last year (Q4 loss of $2.55 per share was 35 cents better than expectations). 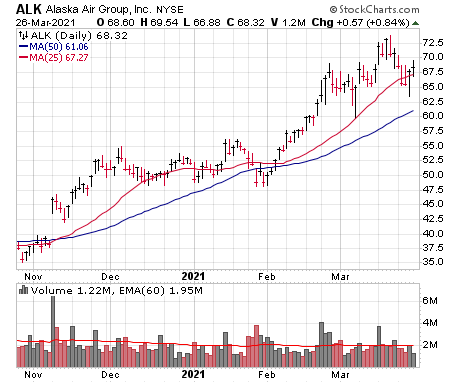 Like all airline stocks, Alaska Air shares plunged due to the pandemic and was still languishing through Halloween. But last November, “reopening stocks” got a boost as vaccines were proven effective, and Alaska Air’s share price has surged since.