Tyler Technologies and the Digital Transformation

Successful investing is about riding big trends. Digital transformation is the single biggest investment trend in our lifetime and it is only getting started, observes Jon Markman, a tech sector expert and editor of Strategic Advantage.

Tyler Technologies (TYL) is set up to win big as the digital transformation wave rolling across of municipal, state and federal government offices and agencies reaches tsunami status.

The Plano, Tex.-based company is not a typical software concern. The business began life as a conglomerate with interests in trucking, explosives and sewage pipes.

Joseph McKinney, the company founder, started his career in 1960 as a venture capitalist. By the age of 28 he was a millionaire and looking for his next big opportunity. That business was Saturn Industries, an amalgamation of three defense contractors.

During the next three decades Saturn turned into Tyler Industries and annual sales swelled to $1.1 billion. Then McKinney dismantled the entire enterprise and returned the capital to shareholders. Tyler Industries was the shell company that in 1997 became Tyler Technologies. And that’s when everything changed. 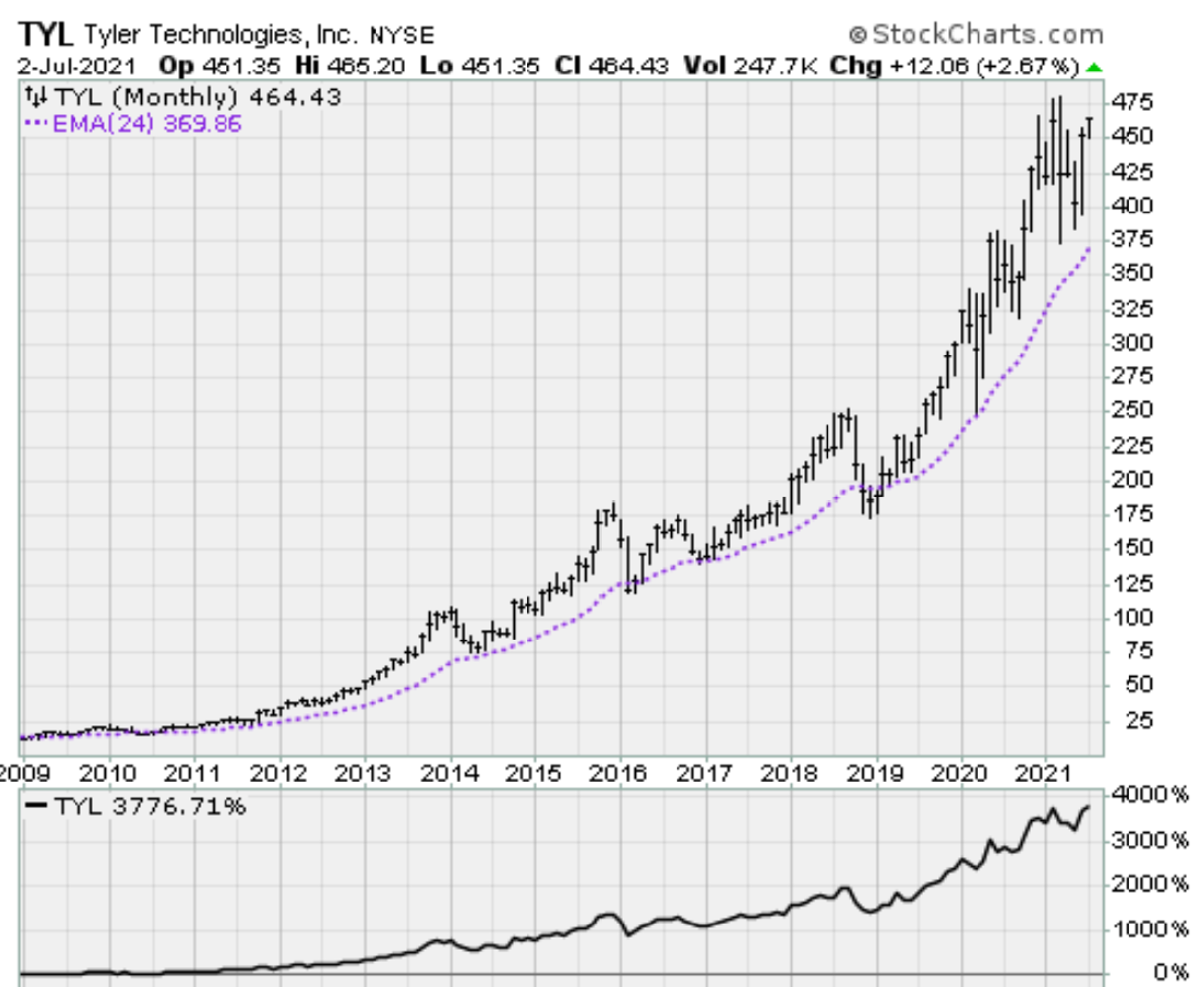 New corporate managers could see what the internet was doing to paper. They began building a platform to digitize the mountains of paperwork that was gumming up municipal and state governments all over the country.

Better still the fledging software platform was being mostly left alone by bigger vendors like Oracle (ORCL), SAP (SAP) and IBM (IBM) due to a culture clash with local governments and near glacial sales cycles.

From the beginning Tyler product and sales managers were smart, too. They built software suites around courts and justice; records and tax; public safety; enterprise resource planning; regulatory; appraisals; and schools.

A clever perpetual licensing platform meant small governments could buy software once and get continual upgrades as long as they maintained valid subscriptions. The platform began to catch on.

Tyler built the first software tools to move local and state court filings online. Today lawyers all over the country use this system to uniformly file and send court dockets. County courthouses that used to be overcome with boxes of paper documents are now completely online. And the same base code helps people pay parking tickets and property taxes.

Other software modules help cities run 911 emergency systems. The company fielded 31 million emergency calls during 2018 for 15,000 local and state governments both larger and small. Tyler software powers Los Angeles County, with a population of 10.1 million and tiny towns in Texas home to less than 100.

The size of the opportunity is breathtaking.  Paper forms have kept key parts of government siloed. Digitizing the operating systems of cities and states decreases bottlenecks. It makes the public sector efficient. And the marketplace for lean government is insatiable.

Shares trade at 105x forward earnings and 16.8x sales. Although these metrics may seem expensive shares are down from where they traded in March when Tyler managers announced the $2.3 billion acquisition of NIC, the leading online payment platform for government services. Let’s buy the stock on the next pullback.