How Will the Next Housing Bubble Unwind?

There is strong compelling evidence that the housing market is in a bubble — a potentially bigger and more dangerous one in terms of prices and sentiment than the 2005 Housing Bubble, cautions Jim Stack, money manager, market historian and editor of InvesTech Research.

Housing prices have risen parabolically over the past year, leaving the gap between housing prices and inflation at the widest level on record. In fact, prices would have to fall over -40% from current levels before returning to the long-term inflationary (CPI) trend. 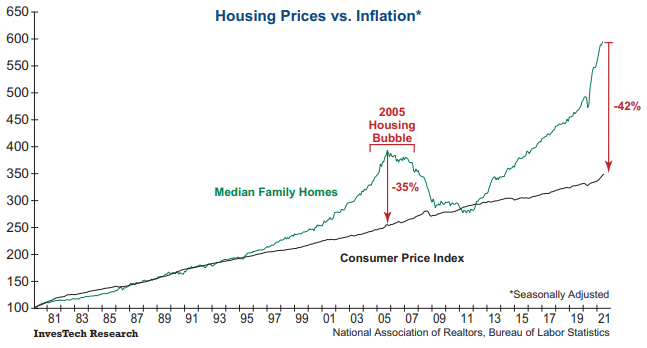 To be clear, this is not an exact replica of the 2005 Housing Bubble. Today’s environment has far more to do with interest rate and affordability risk, while the prior bubble centered around credit default risk caused by subprime lending.

However, U.S. taxpayers will once again ultimately be on the hook if widespread default occurs, as today’s ultra-low-rate mortgages are being sold directly to Fannie Mae and Freddie Mac and, in some cases, are even being purchased by the Federal Reserve.

Over the past 20 years, the housing market has benefitted immensely from the Federal Reserve’s overly accommodative monetary policy in the form of consistently lower mortgage rates. After the popping of the Tech Bubble in 2000, mortgage rates normalized at a lower level as the Fed made a record 11 cuts to the discount rate in 12-months and kept short-term rates low during the early years of the 2001-2007 expansion.

Whenever an analyst or media article uses the word “bubble” to describe a highly-inflated asset or over exuberant level of public participation, it is widely assumed they are forecasting a crash scenario ahead. Yet the historical fact is that bubbles rarely, if ever, end in such a dramatic fashion. In other words, bubbles never actually go “Pop!”

Whether one looks back at 1929, or the Tech Bubble of the late 1990s, or the Housing Bubble that peaked in 2005, the unwinding of excesses generally occurs over an extended time period of several years or even longer.

That does not mean there aren’t scary events along the way (e.g., Black Thursday in October 1929 and the collapse of Lehman Brothers and Bear Stearns in 2008), but there are also plenty of tempting and dynamic rallies to entice bottom-fishing traders to throw more capital into losing speculative investments.

Housing is heading for trouble. Whether or not the housing market is in an actual bubble is still open for debate. Yet the median family home price has doubled in the past decade, fueled almost entirely by the Federal Reserve’s over-accommodative monetary policy. Simply stated — if 30-year mortgage rates were not at 2.9% today, then housing prices would not be in the stratosphere.

The most common arguments against a housing bubble are the shortage of supply and pent-up demand, along with the absence of the sub-prime mortgage fiasco that collapsed in 2008.

However, the supply/demand imbalance will become a moot point if unaffordability becomes a bigger problem. And as shown inside, houses are already 24% less affordable than they were just 12 months ago when mortgage rates first dropped under 3%.

We are also skeptical about the reassurances of mortgage stability over the long-term. At today’s levels, home prices wouldn’t need to fall very far before mortgages are underwater and defaults would begin.

Merely because the majority of today’s ultra-low interest rate mortgages are held by Fannie Mae, Freddie Mac, and the Federal Reserve, does not guarantee against a default crisis. The lesson from 2008 is that such crises are never recognized until the aftermath hits.

When looking at the extreme dynamics in the U.S. housing market today, one can only guess when and how this bubble will unwind. However, we have a strong historical conviction that it will end badly, and a “safety-first” investment strategy must allow for that potential fallout.