It's Time to Buy Bonds

The stock market remains at the most expensive levels ever. Plus, it is still extremely overbought on a technical basis, too. This tells us that a drop is probably coming soon, cautions Mary Anne and Pamela Aden, market timing experts and editors of The Aden Forecast.

We’ll start with one of our most important charts (see Chart 2, below). Here you’ll see the stock to bond ratio, which compares the strength in these two markets. 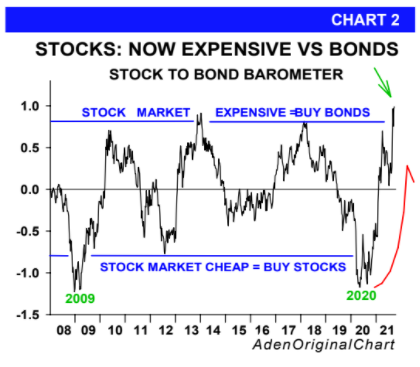 When this ratio is too high, like it is now, it means that stocks are too expensive compared to bonds. That is, it’s time to buy bonds because they’re very cheap versus stocks. (The opposite is true when the ratio is too low.)

As you’ll remember, bonds do well during uncertain times. That’s usually when investors move out of stocks and into safe haven investments. And bonds are one of the top safe havens of choice. At this point, if economic and geopolitical uncertainties coincide, then bonds could soar.

So our best advice is to stay cautious and be quick to lighten up on your stocks at the first signs of weakness. That is, keep your eye on the exit. That’s when you’d want to switch into long-term bonds, if you haven’t bought yet.

Maybe we’re being too conservative, but we don’t think so. Something’s up. We don’t yet know what it is, but we’ll know soon enough.

The bottom line is, U.S. Treasury bonds are the investment of choice for big investors during uncertain times. If signs of uncertainty continue, which we believe they will based on the evidence and market action, then institutional investors will be quick to sell stocks and buy bonds.

Meanwhile, the world likes U.S. bonds and considers them a safe investment. And as buyers pour in, it’s going to drive bond prices higher. Besides, U.S. bonds are better than other countries’ bonds.

Higher bond prices will offset the disadvantage of a negative interest rate, and when bond prices rise strongly, the gains can be very impressive. In 2018-19, for instance, bond prices soared about 100% and it looks like the upcoming rise could be similar.

Most important, the Fed does not want higher interest rates, period. It’s going to keep interest rates low and it’s going to continue with its easy money policy. How do we know? Because the Fed keeps saying so.

It’s best to watch what the Fed does, and not what it says. And without saying it in so many words, the Fed’s story is that the economy needs the bond buying stimulus to keep on going.

Considering the government debt has skyrocketed to the point of running a $3 trillion deficit for the past two years, it’s almost like the Fed can’t and won’t raise rates. It would be financially dangerous and in the current situation, they’ll likely continue on their current course.

Overall, bonds have great upside potential and they’ll likely be one of the top performers in the months ahead.  If you’d rather buy a bond ETF, our favorites are iShares 20+ Year Bond (TLT) which tracks long-term U.S. Treasury bonds. We also like SPDR Portfolio L-T Treasury (SPTL); it also moves with long-term Treasuries. And last but not least is iShares TIPS Bond (TIP), which is an inflation protected bond.