This is a record not seen since a similar 8-month streak that ended a month after the March 2000 peak of the Tech Bubble.

And according to stockanalysis.com, in the speculative IPO arena there have been 740 IPOs on the US stock market so far in 2021 – with three months to go. That is more than the total combined number of IPOs from the last two years, and 186% higher than the previous record IPO year in 2000.

However, excessive speculation — like overvaluation — does not cause a bear market. It simply means the downward slide could be much faster and much deeper when the next bear market does strike. And there is growing evidence that we should be watching for those early warnings of a possible top in spite of strong economic reports.

Personally, I have no doubt that the nuttiness that is pervading Wall Street today will ultimately go down in history books as rivaling the dot-com foolishness of the late 90s Tech Bubble and the highly leveraged investment trusts of the late 1920s — both of which were wiped out in the aftermath.

Between the SPACs, NFTs and over 6,000 cryptocurrencies, there are countless ways to lose one’s hard-earned investment capital without even trying. And while the under-the-radar scams and fraud are clearly excessive, even the above-board shenanigans don’t seem very “above board.”

At this point, the best offense is a good defense — and a good exit strategy.Our recommendation to not play in the most speculative or high-momentum stocks or sectors in the market might seem premature, but if today’s extreme frothiness proves to be a  precursor to major trouble ahead, there’ll be little time or opportunity to implement defensive measures when the time comes.

The showdown between an overly accommodative Fed policy and sticky inflation pressures is all but certain. While corporate earnings reports or forecasts all seem positive, keep in mind that literally by definition, bull markets peak when expectations are highest.

And our InvesTech Investor Psychology Barometer (IIPB) confirms that Wall Street expectations have seldom, if ever, been higher! We first introduced this barometer in our February issue as a way to measure extremes in investor psychology on Wall Street.

Our IIPB contains a variety of components, from advisor sentiment surveys to options activity, all of which have reached levels of extreme optimism this year. Not only did this indicator recently reach its second-highest reading on record, but this has been the longest period spent in the Extreme Optimism zone. 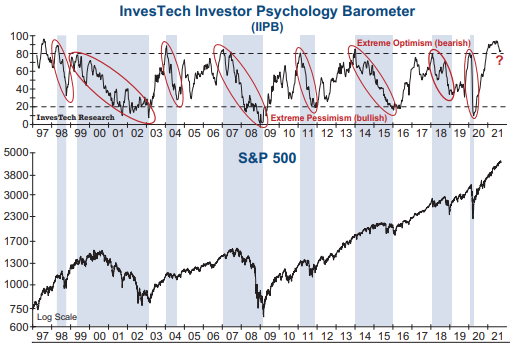 The majority of past instances where the IIPB has fallen sharply after exiting the Extreme Optimism region resulted in either a bear market (2000, 2007, and 2020) or an extended consolidation (1998, 2004, 2011, 2015, and 2018). It’s too early to tell how fast or how far our IIPB will decline in the coming months, or whether that decline will lead to an extended consolidation or a full-scale bear market.

However, if the Fed continues to turn a blind eye to the inflation problem, it significantly raises the probability that a drop in investor confidence will be sharp and swift. In either case, our IIPB is raising a yellow warning flag that supports our preemptive defensive positioning and will likely keep us moving in a cautionary direction.

Another leading index that is showing signs of imminent weakness is our InvesTech Housing Bellwether Barometer. Even in the face of unprecedented home price increases and a construction boom, it is looking strikingly similar to the previous Housing Bubble top in 2005. 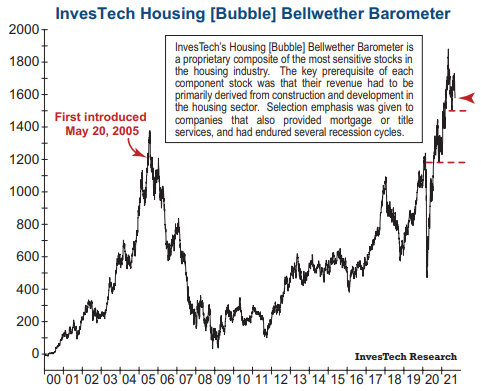 Fundamentally, the blocks are still in place for this bull market to continue. But technically, there are serious cracks in the foundation — and a few of the cornerstones in consumer confidence and monetary policy could be starting to crumble.

We have already reduced our invested allocation twice since June, and plan to be methodical and proactive in taking additional defensive measures if increasingly bearish warning flags emerge.