The "BATT Signal" is Flashing

I heard some news recently that slipped right past most investors. And to me, it sounded like someone firing the starting pistol for the race in battery metals, asserts Sean Brodrick, growth stock specialist and editor of WealthWave.

Contemporary Amperex Technology, a Chinese company that is the world’s largest maker of electric vehicle (EV) batteries, just paid $297 million — in cash — for Millennial Lithium (MLNLF). Millennial is a Canadian company. But its flagship project is its advanced Pastos Grandes lithium project in Argentina.

Meanwhile, multinational gold/platinum/palladium miner Sibanye-Stillwater (SBSW) scooped up a 50% stake in Ioneer (GSCCF). Tokyo-based Ioneer has a world-class lithium-boron project in Nevada near the Tesla (TSLA) gigafactory. Sibanye paid $490 million — also in cash — for half of the company.

By the way, this is Sibanye’s third battery investment of the year. Previously it grabbed 30% of the Keliber lithium mine in Finland and bought a nickel processing plant in France.

There are plenty of other examples, including late last year when China Molybdenum (CMCLF) bought 95% of the Kisanfu copper-cobalt mine in the Democratic Republic of Congo. Most of the deals, though, are battery and car manufacturers frantically trying to lock in supply. Why? Because they see charts like this one: 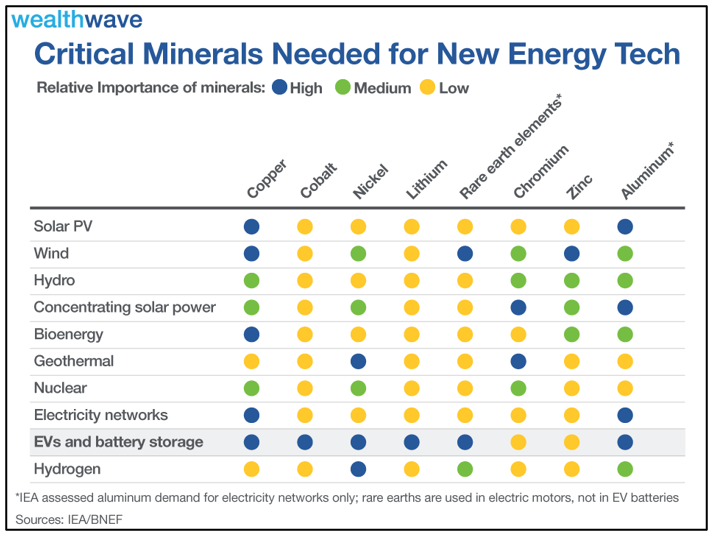 Look at what’s needed for EVs and battery storage: copper, cobalt, nickel, lithium, rare earth elements and even aluminum. Do you want to do solar power? You’ll need lots of copper and aluminum. Wind power? Add rare earths and zinc to the list of must-have metals.

Exactly how much is needed depends on demand. But in order to bring the world in line with the stated policy goals in the legally binding Paris Climate Accords — which include a 50% reduction in emissions by 2030 and a 90% reduction by 2050 — we’re going to need a lot!

Where is all that supply going to come from? That’s the multibillion-dollar question! The answer likely involves top dollar prices and a mad scramble for resources. This is why major mining, battery and auto companies are carrying bags of cash to buy up resources in all stages of development.

They aren’t just worried about this year — or even next year. They’re worried about the next decade. The number of EVs on the world’s roads are expected to increase to 145 million by 2030 from just 11 million in 2020. Talk about growth! Long-range, low-weight lithium batteries are the biggest thing to happen to transportation since the Model T.

We’re at another revolutionary moment. For companies big and small, the stakes couldn’t be higher. To be sure, a lot of this is speculation. For example, cobalt demand could be anything from 10-30 times higher than today’s levels depending on what assumptions you make about new battery technology and changes to climate policy.

But that’s an opportunity for you! While Wall Street dithers about what to do, a smart investor can get in ahead of the deep-pocketed crowd. So, how can you get your piece of this megatrend?

Here’s one idea. The Amplify Lithium & Battery Technology ETF (BATT) owns companies along the battery spectrum, from mining to battery engineering to manufacturing. 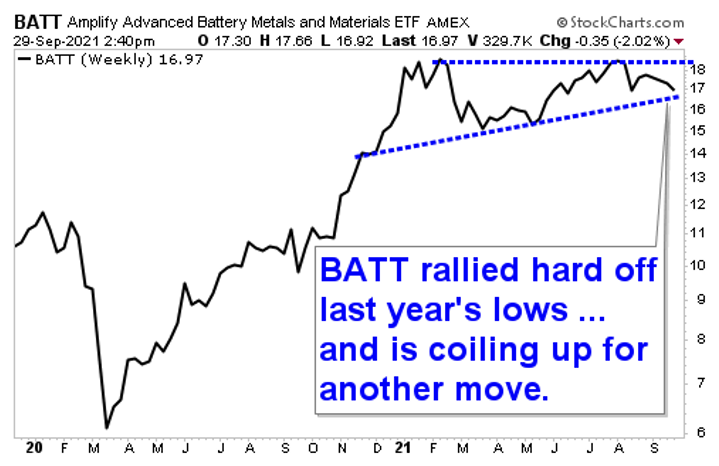 As the chart illustrates, BATT rocketed off its bottom last March. It’s spent much of 2021 consolidating into a wedge, coiling up for a potentially big move. With higher lows over that span, my bet is that its next big move is higher. The BATT signal is flashing.