Hydrogen: An Alternative Fuel for EVs?

The world is zooming toward an electric vehicle (EV) future, but there’s an alternative power system that runs on the most common element in the universe, and its only emission is water, notes Sean Brodrick, editor of Wealth Wave.

While EVs are the most common alternative fuel systems for cars and will likely win the race to replace gasoline and diesel vehicles … you could argue that hydrogen fuel cells are a better system.

EVs take much longer to refuel the average EV than it does a car with an internal combustion engine (ICE). When EVs finally end up in the landfill, the amount of waste is going to be huge. There is no coast-to-coast EV charging infrastructure (yet).

In addition, EV batteries require lithium and other minerals that are in increasingly tight supply and increasingly expensive. Hydrogen fuel would also need to have a charging infrastructure built.

On the other hand, you can refill a car with a hydrogen fuel cell about as quickly as you can an ordinary ICE vehicle. A kilogram of hydrogen stores much more energy than 100 kilograms of EV batteries. The inputs for hydrogen fuel are hydrogen and oxygen. The fuel cells are made with carbon, platinum and graphite.

Hydrogen fuel does have one big drawback, though: It’s explosive like gasoline, and fuel cell cars keep it under pressure. On the other hand, the fuel cell car, Mirai, from Toyota (TM) underwent crash tests and received a five-star rating.

So how does a hydrogen fuel work? It generates electricity from a chemical reaction between hydrogen and oxygen. The oxygen comes from the air all around us. The hydrogen is compressed and stored in a tank on board the car.

Drivers refill at filling stations just like they would with ICE vehicles. Unlike an EV battery, a fuel cell does create exhaust — but that exhaust is what you always get when hydrogen and oxygen react: water.

Still, EVs are taking a huge lead in this race. Hydrogen fuel cell EVs — or FCEVs — are very few. Toyota, Hyundai (HYMTF) and Honda (HMC) make one model each.

I believe EVs will win the larger race, primarily due to early investment, greater critical mass and political support. But hydrogen still has a path to success. Hydrogen fuel cells are finding adoptees in industries that value time. In other words, those that don’t want to have vehicles sitting around charging up. As a result, around 35,000 forklifts in the United States are powered by hydrogen.

And the short refueling time gives FCEVs an edge over EVs for taxis and delivery trucks, which can be in use around the clock. Municipalities have found that hydrogen works very well for city buses.

In Canton, Ohio, every morning more than a dozen buses refuel with hydrogen before starting their routes. Two California transit systems — one in Oakland and one in Riverside County — also run hydrogen buses as part of their fleets.

The truck divisions from Volvo (VLVLY), Daimler (DMLRY) and other manufacturers have announced partnerships, too. A new electric heavy-truck maker, Hyzon Motors (HYZN) is already rolling trucks out of its factory. And Toyota, Kenworth and the Port of Los Angeles are testing hydrogen trucks to haul goods from cargo ships to warehouses.

That’s where infrastructure comes in: It’s not that hard to add a hydrogen tank to an existing filling station. However, harvesting hydrogen is a challenge. Of the 75 million tons produced annually, most comes from carbon emission-creating processes involving steam reformation of natural gas ... and China uses high-polluting coal.

Now, research is focusing on electrolysis, which uses electricity to separate hydrogen and oxygen in water. And with wind, solar and other renewables — including nuclear — growing worldwide, electrolysis can be done cleaner and cheaper, according to Joe Cargnelli, director of hydrogen technologies for Cummins, which makes electrolyzers and fuel cell power systems.

Clean electricity might even be used to make and store hydrogen at a rail yard, to refuel locomotives and semis ... all with zero emissions. Cummins expects widespread use of hydrogen in the U.S. by 2030, supported by stricter diesel emission regulations and the government’s zero-emission requirements.

And there’s something else — one speed bump for the EV megatrend is that every EV battery uses about 10 kilograms of lithium. As EVs replace ICE vehicles, lithium’s demand and price are expected to soar. That could make hydrogen fuel cells more attractive to a lot of end-users.

There are a number of exchange-traded funds that focus on the hydrogen economy. But in my view, only one has enough volume to be tradable: the Defiance Next Gen H2 ETF (HDRO). 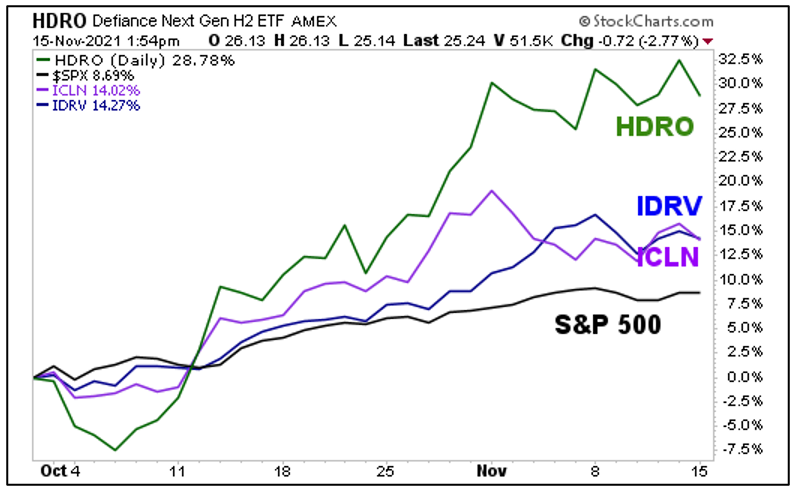 About 30% of this fund is invested in U.S. stocks, but it spreads money around the world. It holds 25 stocks, and its three biggest investments are Plug Power (PLUG), FuelCell Energy (FCEL) and Bloom Energy (BE).

It has an expense ratio of 0.3%, and since early October, HDRO has outrun the S&P 500, the EV fund iShares Self-Driving EV and Tech ETF (IDRV) and the broader clean energy market, as tracked by the iShares Global Clean Energy ETF (ICLN).

Just remember, hydrogen stocks are very volatile. So, it pays to do your homework before investing.