An ETF for the Metaverse 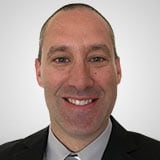 The "metaverse" has become a popular buzzword in the financial markets, so much so that Facebook (FB) actually rebranded itself to Meta Platforms in reflect its new strategic direction. The next-generation internet is here, asserts David Dierking, editor of The Street's ETF Focus.

The metaverse will include not just the physical world and everything in it as we know today, but add in the virtual world and the personal, physical and economic opportunities that come with it. It's essentially another version of the tech/internet sector built for the new virtual world.

The potential in this space is obviously huge. Platforms, such as Roblox (RBLX), are already seeing significant success, but the overall market is expected to easily double in the next few years. Themes, such as eSports, gaming and sports betting are expected to see rapid growth but will likely come with very rich valuations.

Not surprisingly, it didn't take long for an ETF issuer to jump on the trend and launch a fund that tried to capture the metaverse in a single portfolio. The Roundhill Ball Metaverse ETF (META) launched back in June 2021 and tracks an index that "consists of a tiered weight portfolio of globally listed companies who are actively involved in the Metaverse".

As far as how that "tiered weighting" philosophy works, META's index will give greater weightings and rankings to companies it considers pure plays, while giving smaller positions to "core" and "non-core" names.

While META tends to focus mostly on large- and mega-cap names, its allocation within the tech and communication services sectors is pretty diverse.

No one theme is really overweighted in the portfolio. You've got the gaming platforms obviously, such as Roblox, where people will actually be hanging out. The social network platforms, such as Facebook (sorry, I can't call it Meta just yet), which will also provide gaming and communication experiences, are a relatively smaller weighting, but still carry some impact.

Then you've got the names that provide a lot of the graphics, interfaces and communication tools within the metaverse. Nvidia (NVDA) is the fund's biggest holding, but Unity Software (U), Microsoft (MSFT) and Taiwan Semiconductor (TSM) are also in the top 10.

The fund is relatively concentrated among roughly 40 names in total. While it targets the metaverse, this is a tech ETF first and foremost. A little surprisingly, META doesn't correlate as highly with the traditional tech-focused funds as I thought.

It has a correlation factor of between 0.75 and 0.80 with the Invesco QQQ Trust (QQQ) and the Technology Select Sector SPDR ETF (XLK). It's highest correlation is with the First Trust Dow Jones Internet Index ETF (FDN) at roughly 0.88.

META is already up to more than $400 million in total assets, a good start for a fund that's only five months old. It's early success, however, can be considered something of a happy accident.

The ETF got off to a decent start and has generally been a slow and steady grower, but as recently as a month ago, it still had just over $100 million in assets. Then, Facebook announced that it was changing its name to Meta Platforms. You can see what happened next. 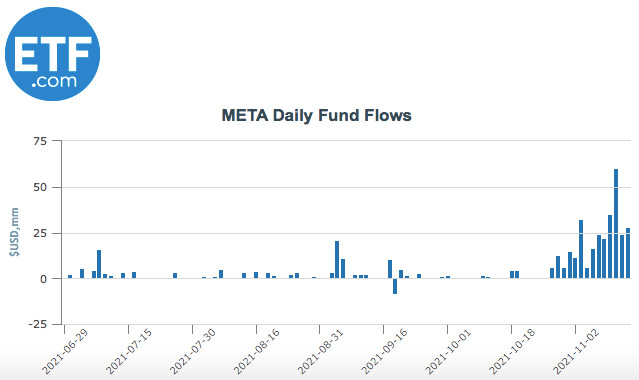 Whether people got this ETF mixed up with Facebook or they saw it as a genuine opportunity to get in early on the metaverse theme, META saw its assets quadruple in a matter of weeks. Even now, the fund is still taking in roughly $25 million a day. While I wonder if it can keep up the pace, META is looking like it has a chance to be a $1 billion fund in time.

It's still a little early to call META a definite success, but it looks like it's on its way there. Investor interest is there and as consumer awareness and acceptance grows (most people I'm guessing still have no idea what the metaverse is even if they have heard the word), I expect that this fund will do even better.

The 0.75% expense ratio is a little high for an index fund, but not altogether out of the ordinary for a thematic ETF. Is it investable at the moment? It still has room for improvement. Trading spreads are still a tad on the high side and it is deviating modestly from its NAV.

The median daily trading volume is only about $3 million, so there still aren't a lot of buyers and sellers out there. If you really want to jump in on the metaverse trend right now, it's probably acceptable enough, but it should improve over time.

Overall, I like META even though it likely won't perform all that differently from a broad and cheap tech ETF. There is enough uniqueness and a lower-than-expected correlation, however, to make it worthwhile as a satellite holding in the growth portion of a portfolio.