Scoop up Your Wheaties

As inflation sits near the highest level in over 40 years, Wall Street’s bracing for recession and selling former high-fliers and everything else, asserts Sean Brodrick, editor of Wealth Megatrends.

Well, not everything. Typical of late-cycle environments, we’re still seeing money rotate from growth stocks to value stocks. And as I have pointed out, this is the time for high-dividend stocks to outperform the S&P 500.

Now, if we can find a stock with those qualities AND that’s able to pass along inflation to consumers, we’ll probably do very well. I have just such a pick for you today.

Food prices are inflating faster than my waistline. First, let’s focus specifically on food inflation. In the Bureau of Labor Statistics’ most recent report, food prices overall were up 9.4% year over year in April, and food at home rose a whopping 10.8% over the same time — the largest one-year increase since November 1980!

Meat, poultry, fish and eggs led the way higher, up 14.3% year over year ... the largest increase for that segment since 1979. Cereals and bakery products were a close second at 10.3%. That’s double-digit inflation, which is exactly what I’ve been warning about.

In fact, April was the 17th month in a row that food prices went higher. And five of the six major grocery store food group indexes increased over the month. According to an April Nielsen survey, consumers actually bought 0.2% less food year over year, while still paying 7.3% more for it.

You might think this means consumers would buy more generic brands. Surprisingly, that’s not the case. Another Nielsen survey done in March revealed private-label brand-name products outperformed store and generic brands for the first time in six months, notching year-over-year sales growth of 7%.

This is good news for our latest pick: General Mills (GIS). You know the company by its popular cereal brands: Wheaties, Cheerios, Chex and Lucky Charms. The company also owns Betty Crocker, Annie’s and Fiber One. In 2018, it moved into pet food by acquiring Blue Buffalo for $8 billion.

General Mills had sales of $18.3 billion last year. In fact, it increased sales every year for the past five years. When it reported its fiscal Q3 earnings in March, the results were yummy:

This chart below shows General Mills’ revenue, net income, cash flows and earnings before interest, taxes, depreciation and amortization (EBITDA) over the past five years. The trend for all these financial performance measures is steadily climbing higher. And things are looking so good, General Mills raised guidance, expecting organic sales to increase by 5%, up slightly from its previous outlook. 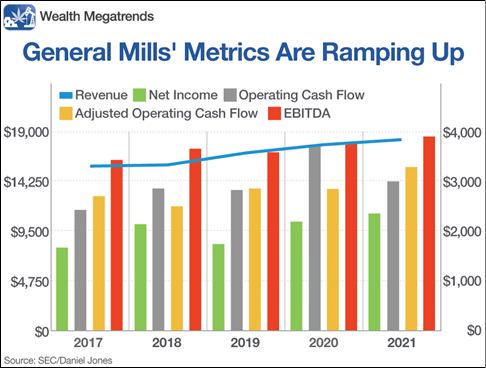 The company has worked actively on reducing debt. Its debt-to-equity ratio is 113%; still a bit high, but way down from the previous 184%. And GIS still has plenty of cash for acquisitions, just inking a deal to acquire TNT Crust, a maker of partially baked pizza whose company has seen double-digit compound annual net sales growth each of the past four years.

Looking ahead, General Mills seems to be successfully navigating higher raw materials costs and supply-chain issues. It’s passing along price increases to consumers who seem willing to pay. Margins are improving, and GIS is managing its supply chain.

Sure, food prices could spike even more, and if that happens, we’ll have to see if consumers balk at paying brand-name prices. But in this wild market, General Mills seems like one of the safer bets.

That dividend is projected to grow 1.29% per year for the next three years, but General Mills is such a cash flow machine that an upside surprise would not shock me. After all, the dividend payout ratio is just 50%.

And General Mills likes to buy its own stock. In the first nine months of its 2022 fiscal year, the company bought back 8.8 million shares for $550 million. That should support the share price, too. Technically, share prices are channeling higher and recently broke out to the upside. Our working target is $95 a share, but it could go much higher from there.