I don't like companies with excessive economic risk. I don't like most stocks in the technology sector given their  excessive valuations, cautions Mike Larson, editor of Safe Money Report.

But I do trust my Safe Money methodology ... and boy, has it found one stock worth adding to your arsenal. I'm talking about Amdocs (DOX). Unless you're active in the corporate communications and media industries, you probably haven't heard of it. That's because it's a business-to-business company, rather than a consumer-facing one.

Amdocs is a global company. Its primary facilities can be found in the U.S., Canada, U.K., Ireland, Switzerland, Israel and India. From those locations, it helps companies better interact with customers, roll out new products, automate back-office service and network functions and more.

Take Bell Canada, a subsidiary of BCE (BCE). The company wanted to detect and reduce fraud more efficiently and accurately in order to cut losses. So, Amdocs provided an artificial intelligence/machine learning-based solution that boosted fraud detection by 10% and helped Bell Canada detect fraud losses three times faster on half its cases.

Then there's Major League Gaming, the private company that sponsors online and in-person video gaming tournaments for contestants from all over the world. The firm needed a way to bill subscribers in multiple geographies and currencies, identify new potential customers, analyze promotion performance and more. Amdocs' Vindicia subsidiary helped it do just that.

Amdocs has been a serial acquirer over the years, growing its reach through purchases of a wide range of digital commerce, network and cloud tech and software design and development companies. Some of its larger acquisitions include Vubiquity in 2018, TTS Wireless in 2019, Openet in 2020 and Sourced Group in 2021. 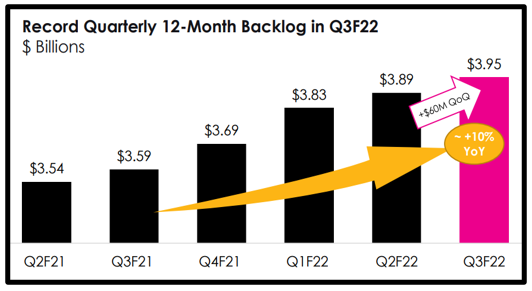 The company confirmed it was on track to hit its targets for the year, too. That includes a ~12% increase in earnings per share after adjusting for certain expenses and the divestiture of its OpenMarket division.

According to CEO Shuky Sheffer, "While we are closely monitoring the uncertain global macroeconomic environment, we are confident in our unique business model that includes mission critical products and services, highly recurring revenue streams and long-term customer engagements."

What else do I like here? Amdocs yields around 1.7%. That's not crazy high, but it's better than the 1.4% yield spun off by the SPDR S&P 500 ETF. Our Weiss Ratings system also upgraded the stock to "Buy" territory back in February. Its Weiss Rating rose to "B" from "C+," thanks to improvement in growth, valuation and efficiency readings.

Unlike many tech stocks that have gotten creamed, DOX has steadily climbed. In fact, it just hit a 22-year high! The company's firing on several cylinders, and my investment screening process is picking up on that strength. We are adding the stock to our Bedrock Income Portfolio.