Algos and the "Risk of a Cataclysm"

We first noted back in April that algorithmic trading amounted to $71.5 trillion, accounting for the entire increase in total dollar trading volume (DTV)  from the peak in March 2000 through the end of 2018, observes Alan Newman, market timing specialist and editor of CrossCurrents.

In other words, dollar trading volume by humans has not budged in 19 years, which is probably the most astonishing development we have ever encountered.

Think about that. Over nearly two decades, the last ten years of which have been a bull market, trading has been totally dominated by methodologies that for the most part, have nothing to do with the prospects of individual stocks. Nothing like this has ever before occurred.

It is easy to confirm that the human aspect of the stock market has retreated significantly. Although exchange traded funds have grown tremendously and are now routinely accumulated, they still represent only 23% of the total picture.

Mutual funds remain the big driver for investment, yet the number of funds peaked into the housing and stock market mania of 2007 to 2008.

Prices are rising primarily as a result of algorithmic trading — or "algos". Indexing has exacerbated valuation problems as index funds and index ETFs accumulate the stock of companies for no other reason than their presence in an index.

While one might be able to make the argument that a company in a major index such as S&P 500 could be assumed a valid investment, algos are not necessarily dependent upon that criteria at all. Algos are able to profit without resorting to strategies that gauge valuation.

Simply put, algos may not give a fig whether a company is “worth” X or Y and can even profit while losing on trades. How else could stocks rise for ten years with more than $1.5 trillion in outflows from funds? 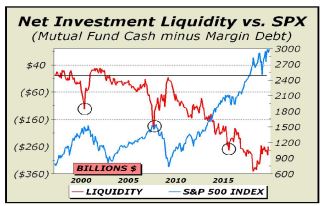 The chart above appears to be bonkers. In the ten years into the October 2007 high, mutual funds experienced $1.2 trillion in inflows and the Dow Industrials gained 74%, a perfectly normal outcome — over 5.6% annualized — despite a 50% collapse when the tech mania imploded.

However, the $1.5 trillion in outflows over the last ten years have been accompanied by the Dow gaining 195%! This is an annualized rate of nearly 10%, close to double what history shows we should expect. Does this make any sense whatsoever? Of course not.

Thus, we now find ourselves in the most curious environment in history. In the chart below there is still more evidence that investment no longer drives daily trading. For 72 years before the tech mania, investment ruled and the average holding period for stocks was three years and nine months.

That was long enough for the “long term” to come into play. It was long enough to see corporate strategies to be implemented and for growth targets to be achieved. But not any more. Holding periods are too short for value to be any consideration. 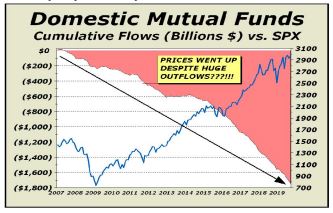 Worse yet, investment liquidity — in the next chart — remains well into negative territory and far below the two prior crushing bear markets that commenced in 2000 and 2007. 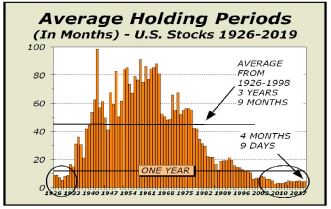 We see a cataclysm just waiting for the right trigger. Make no mistake, what we have shown on these two pages fairly represent the most dangerous environment in stock market history. Our eventual bear market target remains Dow 14,719.