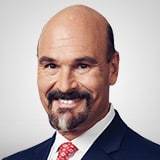 Jon Najarian, co-founder of OptionMONSTER.com, says the return of risk premiums to the markets may offer smart investors the opportunity to profit-at the expense of reckless ones.

"The moment somebody says 'this is very risky' is the moment it becomes attractive to me."-Kate Capshaw

Surely this comment from Ms. Capshaw (or, as many of us know her, Mrs. Steven Spielberg) will ring true, as there are those among us who are indeed drawn to risk like a moth to a flame.

The fact is, it's usually where the big rewards can be found. The disconnect comes when the risk is greater than the reward, and some people just keep pushing their luck.

We all witnessed the explosion in risk premiums [when the Dow Jones Industrial Average] experienced its worst week in four years at the end of February. The triple-digit losses we saw back then should have caused the hairs to stand up on the back of most investors' necks.

Yet clearly there were some who ignored those warning signs and continued banking on the same reward scenario-even though the market was screaming that risk was increasing!

Even though we're seeing new highs in the markets, things are indeed riskier for traders now. Were we seeing 200-point swings within mere ten-minute periods prior to the implosion in China that rocked the rest of the world's markets? No, we weren't.

[But] while the markets are more dangerous today than they were a couple of months ago, the risk premiums have increased dramatically. And while it may be hard to believe, those higher premiums mean the risk-takers are actually taking less risk!

If you were playing backgammon and the die were turned against you, then you'd understand that the potential reward had increased and it would be up to you whether the reward actually justified the risk. This doesn't just happen at gaming tables; it also happens in real estate, the futures markets and, of course, the stock market.

Smart traders should concentrate on milking the opportunities where the foolhardy have panicked and created significant rewards-in many cases, rewards that are two or three times as great as the same amount of risk would have yielded just two months ago.

The bottom line is this: When you're lucky enough to be in a poker game with someone who doesn't understand the game or is just taking unnecessary risks, it's incumbent upon you to gratefully accept the money [he or she seemingly insists] on throwing your way.

The same is true with the stock market-and I must say I take perverse delight in watching those overconfident souls come back to pay the piper. As an options trader, reducing your risk as much as possible is the safest and smartest way to play. So, when those less-savvy folks are ready to throw their money away, we shall stand "gladly" by, ready to catch it!