A Dow Theory bull market was just confirmed on April 3rd when the Dow Industrials and Dow Transportations both closed above their February highs, observes Mary Anne and Pamela Aden, editors of The Aden Forecast.

This was the last sign we were waiting for in order to move back into the stock market. 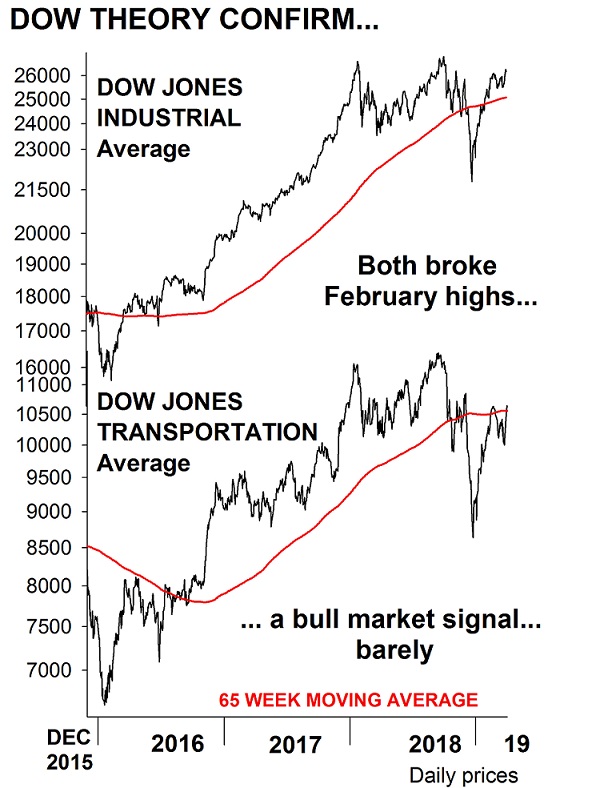 That was especially true considering that our own indicators were bullish and so was the Primary Trend Indicator (PTI). In fact, the PTI has been leading all along (see chart below).

But as we've often discussed, signs of concern persist, primarily on the fundamental front. Plus, the actual Dow Theory signal was not a strong one. Here's what we mean...

The Dow Industrials surged well above its February high, which was good, but the Dow Transportations did not. The February high was 10632.49 and the Transports closed yesterday at 10643.65.

That is, it closed 11.16 points above the February high, which wasn't much. Nevertheless, based blindly on Dow Theory, this was a bullish signal.

All things considered, however, we believe risk is still high. But that being said, the market looks poised to rise further. This would be fully confirmed once the stock indexes rise to new all-time highs.

In the meantime, we recommend buying a small position at this time. Start with a 10% position and if we get a full new high confirmation, we'll buy more. The main reason why is because a full new high would then signal the likely start of a speculative bull market and you'd clearly want to be on board for that.

As for the other markets, stronger stocks will not have a negative impact on gold. These markets have generally been moving together since 2015 and that'll likely continue.

Ongoing low interest rates, which we're now seeing, will be good for both stocks and gold. They should be good for bonds too. But bonds are volatile and it's best to wait until they settle down.