The Best Way to Play IPOs

I’d hate to be a startup CEO going into the market to raise money these days, mostly because investors are pulling back on just how much they’ll pony up, asserts Ian Wyatt, editor of Million Dollar Portfolio.

True, it’s not immune to stutters and missteps and it occasionally invests in some duds of its own. But it currently owns a basket of 65 companies that have only recently gone public. As you can see from the graph below, Renaissance IPO has been getting hammered since the end of July. 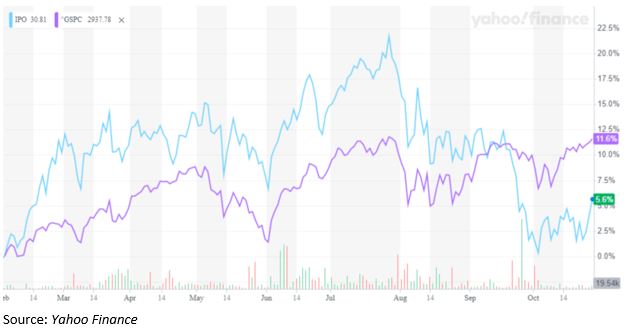 The less-than-stellar post-IPO performance of Uber (UBER), followed by WeWork, which never even made it out of the gate, has dragged down the performance of almost every other company that’s gone public so far this year.

That’s actually good news for us. It means we can buy an entire basket of IPOs, the majority of which are solid businesses, on the cheap.

Since we’re not angel investors in Silicon Valley, we don’t have to sink hundreds of millions (if not billions) of dollars into sketchy companies just to keep the business running. We can buy, and hold, and wait. And that’s going to be the best bet right now.

IPOs can be major moneymakers. Just ask those angel investors. They can also be major busts – ask anybody that had sunk cash into We on the anticipation of a $50 billion IPO.

But we’re up more than 13% with Renaissance IPO since it was added to Million Dollar Portfolio in June 2017. That is proof not all IPOs fizzle.

The key is not betting everything on one IPO and making sure the IPO companies you invest in have sustainable businesses. That’s how you lock in sustainable, recurring profits.