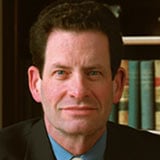 Ken Fisher , an expert in behavioral psychology, always presents one of the most intriguing speeches at The MoneyShows, and his latest was no exception. Based on his contrary belief that whatever most analysts are forecasting will be wrong, he offers this bullish outlook.

"Analysts today are are almost completely in agreement in forecasting that the market will go up between 0% and 10% this year. But I'd note that the consensus of forecasters through history has overwhelmingly been wrong. Why? The market is a discounter of all known information. And whatever they can agree on has already been priced into the market and is therefore, unlikely to occur.

"In the long term, stocks do about 10% a year on average. When you look at the annual returns of the S&P or those of any other western developed nation, you would tend to believe that returns between 0% and 20%—around the average— would happen more commonly than returns that were outside that range. But you’d be dead wrong. Through the world, approximately 30% of all years have had returns between 0% and 20%. And 70% of all years have had returns above 20% or negative. Average returns are not normal. Normal returns are extreme. The average is an average of extreme returns. As a result, equities are actually more volatile than people think.

"What this means is that there has never been a first year of a Presidential term with a return anywhere between 0 and 10%. Yet, that is what most professional forecasters are forecasting— that has never before occurred in the context of the presidential cycle. So it’s important for you to think through whether this year will be positive or negative. If it is a positive year, it’s probably going to be a big positive year.

"I believe that in this first year of the Presidential term, we won’t have a negative. And what happens when we don’t have a negative return? We have a big positive return. I think 2005 will fall into the gain column and that it will fit the pattern by being big— up 30% or more. I believe that because corporations can borrow money cheaply and go out and either buy back their own stock and get free money, or they can borrow money and go buy some other company, that we will have a wave of takeovers this year. I look for an explosion in merger and acquisition activity. One of my basic theses is that free money doesn’t sit around for long. Therefore, I think it’s going to be a much nicer year in the stock market than do most people."