Not only is MSFT the biggest company, it’s also the only company worth more than $1 trillion in market cap (at the time of this writing). It’s been an interesting journey for the company that was primarily known for making Windows operating systems.

These days though, MSFT is involved in so much more. The company owns LinkedIn, the popular business networking site. Microsoft produces the very popular XBOX gaming console. More recently, the company has been pushing its augmented reality (AR) technology. And that’s just the tip of the iceberg.

Big, stable companies like MSFT tend to be used frequently for covered call trades. Covered calls are moderately bullish and low risk. It’s a strategy that’s a good fit for a company like MSFT which is well-established but still has growth potential.

In fact, an interesting covered call trade happened this week in MSFT which caught my eye. What’s somewhat different about this particular trade is that it doesn’t expire for an entire year. That’s definitely a longer duration than most covered call trades you see.

The $2.24 in premium collected means the trader is protected down to $132.84. However, that’s not a big cushion over the course of a year, suggesting protection isn’t the primary purpose of this trade. What’s more, the premium works out to a 1.7% yield over the course of the year.

After seeing the details of the trade, I imagine the first question you have is why make a year-long trade that only yields 1.7%?

First off, MSFT does also pay a 1.3% dividend. That means with the covered call on, the stock will produce a total yield of 3% over the life of the trade. That’s not an unreasonable percentage to earn for a stock with solid growth potential.

Speaking of growth, using the 170 calls in the trade means there’s no cap on the share growth until $170. That’s almost $35 higher, or 26% in stock price appreciation. In other words, the covered call buyer is likely sacrificing some yield in order to keep the growth potential intact. 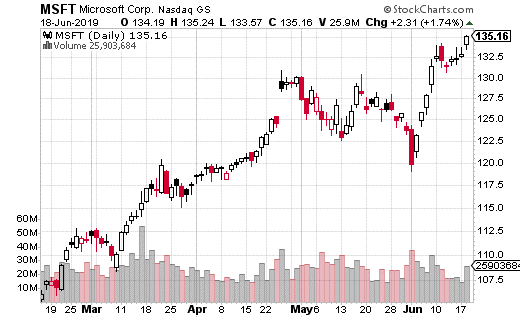 To summarize, we have a long-term covered call which is more focused on growth potential than yield. Basically, the trade is meant to add a little income incentive to holding MSFT for the next year while waiting on future share price growth.

It’s certainly not a bad idea if you’re bullish on MSFT, or any other stock that’s similar. AAPL is probably another name that would have a similar risk/reward for a long-term covered call. In any case, these types of trades are easy to do in your own account if you don’t mind holding options for a year.

Alan Ellman breaks down a subscriber’s trade to determine the when is the best time to unwind ...

What is technical analysis and how can it be used to establish directional options strategies? ...