Facebook’s plan for a cryptocurrency could send its stock on a rally based on fundamental and technical strength as it confirms a megaphone pattern.

Facebook (FB) released its description of its planned new cryptocurrency, the Libra, with an association of many participants like Mastercard Inc. (MA), Visa (V), PayPal Holdings Inc. (PYPL), eBay (EBAY) and Uber Technologies (UBER). Facebook's cryptocurrency has been the subject of much discussion and speculation as it announces its intention of the rollout of Libra in the first half of 2020.

Even though there are similarities with Bitcoin and other popular cryptocurrencies (please link the bold section to Gilburt’s post), Libra appears to be different in many ways. Libra is set up for regulatory compliance with permanent recording and tracing of all transactions, stable coins, full tracking and minting processes.

Facebooks' introduction of the Libra could bring a fundamental change of the ideal concept of Bitcoin (or Cryptocurrency) and could bring some legitimacy and credibility to the cryptocurrency market. It also brings some criticism and pushback from governments, regulators and central banks. Regardless, Facebook may be on the verge of making history and could potentially see a big rally in its stock prices along with Mastercard, Visa and PayPal.

Facebook is currently trading in a megaphone pattern and with the current technical-based rally assisted by the potential fundamental-based boost of Libra launch, Facebook could see a rally based on the megaphone pattern.

Megaphone patterns may also be called an "Inverted Symmetric Triangle" pattern or a "Broadening" pattern and usually, develops after a strong up or down trend in the underlying market.  Megaphone pattern formations have five sharp swings. Each swing is larger than the previous swing, which gives the formation its megaphone appearance.

Another unique characteristic of megaphone top/bottom patterns is that each swing's increasing volatility triggers the reversals of upside and downside swings.

During 2018, Facebook made a series of higher-high and lower-low peaks to form the four pivots of the megaphone pattern. In January 2019, FB made the fourth pivot on the lower trendline at $123 and attempted its rally toward the upper trendline. If Facebook continues with its rally, confirmed by the underlying trend, Facebook could rally towards a fifth pivot at $250 to $265 to complete the megaphone pattern. 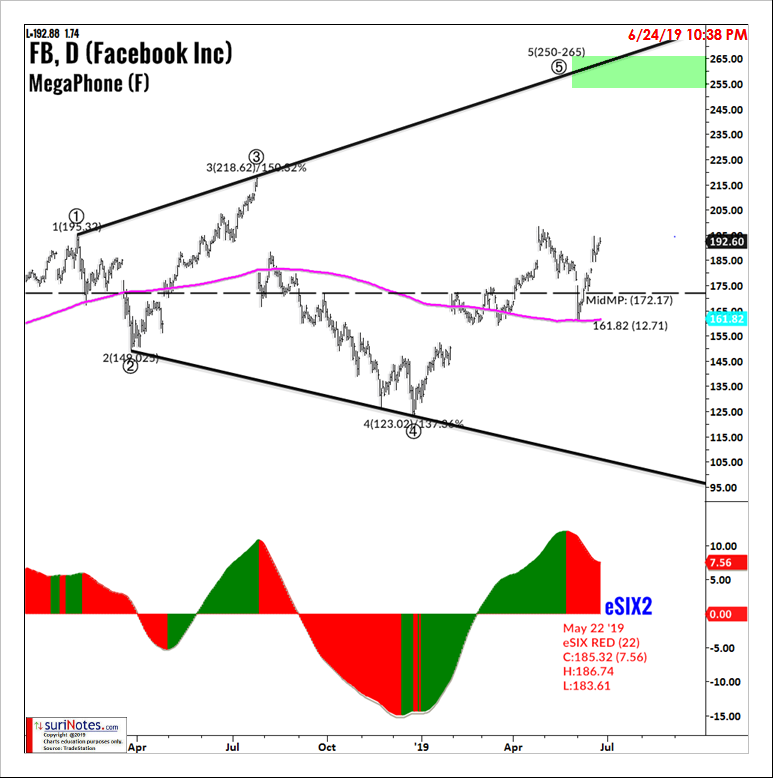