Big Macro Shift Gets a Jolt from Saudi Bombing

The market barely had a chance to digest last week’s shift of momentum in the equity and bond markets when an attack on Saudi production facilities threatens to create more market disruption, notes Joe Duarte.

You know you’re living in interesting times when the bond market takes a dive and the stock market rises to within striking distance of its all-time highs. But when you add the intangible effects of what may or may not be an oil price crisis after the attack on Saudi Arabia over the weekend, it’s clear life as we know it won’t be the same for a while.

Before the attack, things were muddled enough as the expectations for central bank interventions and the potentially unknown repercussions of what could be helicopter money were poised to percolate through the financial system just as millennials come of age and the early innings of the presidential campaign start to heat up. Moreover, as the U.S.-China trade war dance moves to the next stanza of their dangerous game, and the geopolitical situation reaches critical mass (Brexit, Hong Kong, explosive Middle East tensions, and rising potential for regional conflicts everywhere) investors are caught in a quandary as they ask the proverbial question: is it really different this time?

For several weeks I’ve been noting that a big move was coming in stocks and that the bond market was the key to the entire puzzle. And until last week, as bonds sold off and stocks rallied, it seemed we were on the verge of a very intriguing and predictably unpredictable period in the market as the very complex system that is composed of the Markets, the Economy, and Life (MEL) was steadily churning to its next stage.

But now, after the attack on Saudi Arabia, we are once again in muddied waters. Specifically, it will be paramount to see what happens to the bond market after the attack, and if there is any effect on the housing market as the Federal Reserve joins the rest of the world’s central bankers in lowering interest rates at its next meeting and how the bond market responds.

Accordingly, and although it may be too early for this type of calculus, the bottom line for the entire MEL loop is whether the United States will fall into recession and what happens to those that are expecting and betting that President Trump will lose the election, especially in the context of whether the United States once again enters the regional conflicts in the Middle East in a more active fashion.

Bond Traders Have a Decision to Make

The mainstream economists and media were betting on a recession, but until the weekend attack on Saudi Arabia that was yesterday’s news for bond traders. Consider that ever since the Federal Reserve lowered interest rates in July, the entire market had shifted. After the Fed’s July rate cut, bonds rallied, and yields fell to just above 1.4% on the U.S. Ten Year note yield (TNX). But as of the close of trading on Sept. 13, yields had backed up aggressively and were near 2% (see chart). 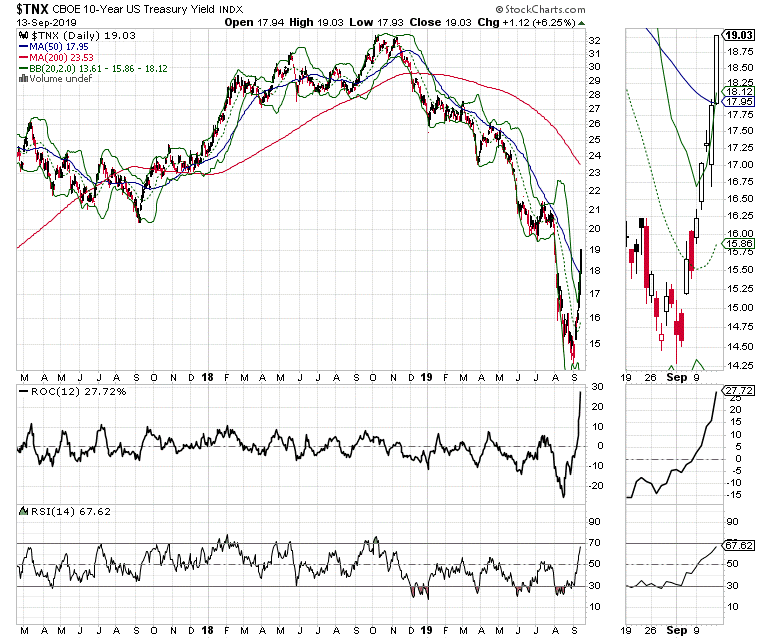 Moreover, further supporting the “no recession” argument was the fact, that barring the interest sensitive homebuilder sector (SPHB) had been moving steadily higher despite rising bond yields behind fairly decent home sales and mortgage with homebuilders giving moderately positive future guidance. Nevertheless, even before the Saudi attack, there was a widening schism between new and existing home sales with the latter lagging due to poor affordability in many expensive older houses with a need for remodeling. 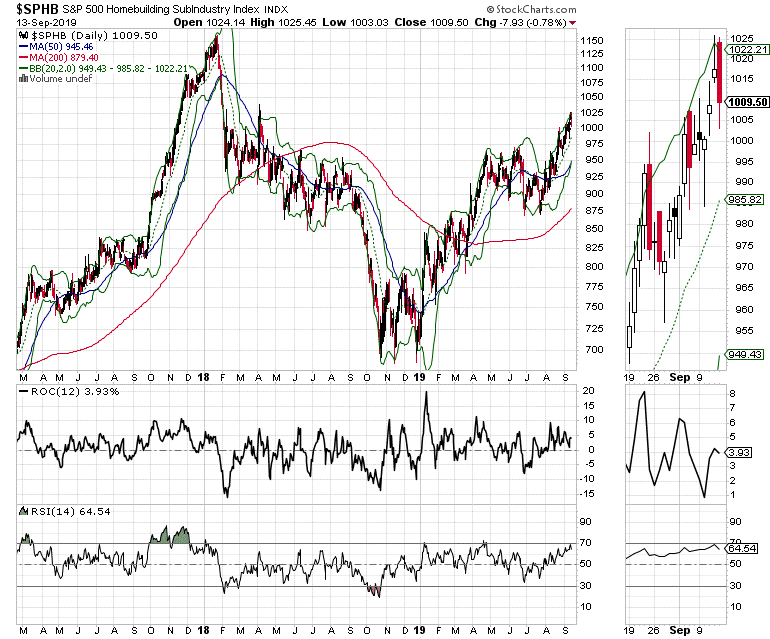 It seemed, however, that homebuilders were adjusting by shifting toward building smaller, more affordable houses to attract new home buyers or those wishing to scale down. Moreover, the next few weeks should provide more clarity on housing if TNX breaches the 2.0% yield after what is almost a certain 25 basis point cut in the Fed Funds rate by the Fed at its upcoming FOMC meeting, or if the Saudi Arabia situation leads to another decline in yields.

Certainly, before the Saudi attack, the interaction between the Fed and the bond market have roiled the interest sensitive real estate investment trusts (REITs), which had become an attractive place for momentum investors. Note the rapid decline in the S&P REIT index (SPRE), which is now threatening to break below its 50 day moving average, a development which is likely to accelerate the selling (see chart below). It is also important to consider whether the market is starting to bet that there is an ongoing shift between apartment managers (REITs) and homebuilders as we experience a demographic transition from high priced apartments to more affordable and newly built single family homes. 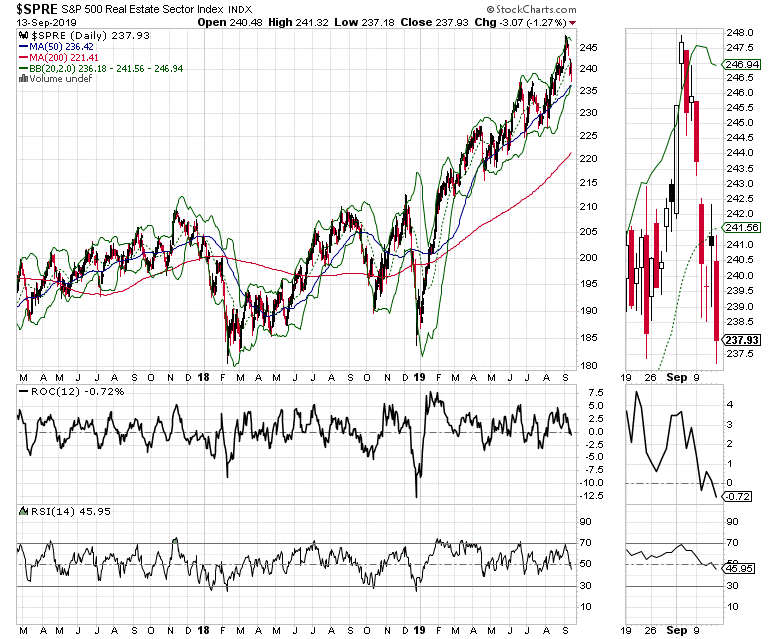 Under the Radar Value

When volatility increases, as is likely in the next few days as the situation in the Middle East unfolds, caution is the best approach. Nevertheless, volatility often precedes opportunity, which is why it’s important to build a shopping list to include stocks which may be attractive after the dust clears.

It makes sense to consider that Wall Street’s recent shift away from momentum toward value stocks is likely to favor networking giant Cisco Systems (CSCO). The former high star stock from the 1980s has languished for the past several months due to investor fears about the U.S.-China trade war. With CSCO recently bottoming, it is a stock to watch (more on this later in the week).

The New York Stock Exchange Advance Decline line (NYAD), the most accurate indicator of the stock market’s trend since the presidential election of 2016 has delivered a stunning breakout to new highs, suggesting that the bulls were back in charge (see chart). Of course, the Saudi Arabia situation is likely to have some bearing on NYAD, so we will have to wait to see how things develop. 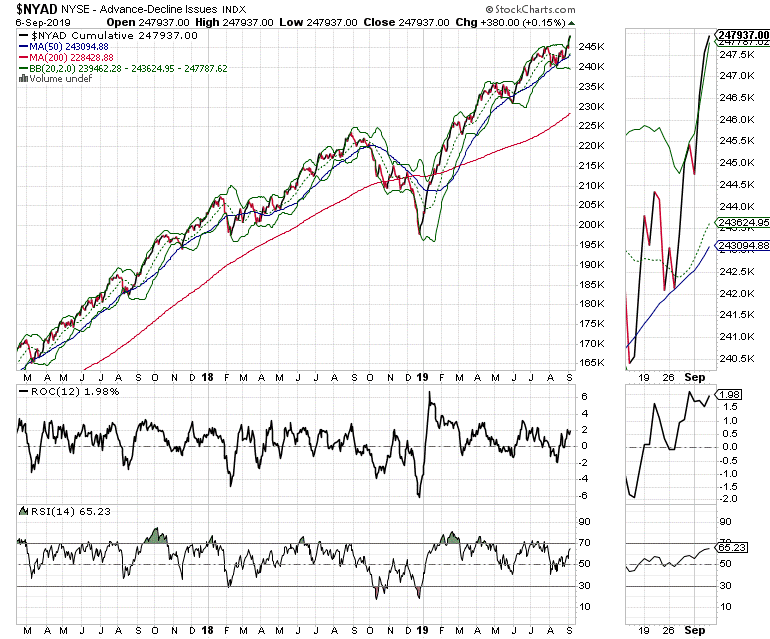 The S&P 500 (SPX) and the Nasdaq 100 (NDX) indices both ended lower on Sept. 13 but had rallied for the prior several days. Moreover, both indexes are within reach of their all-time highs. 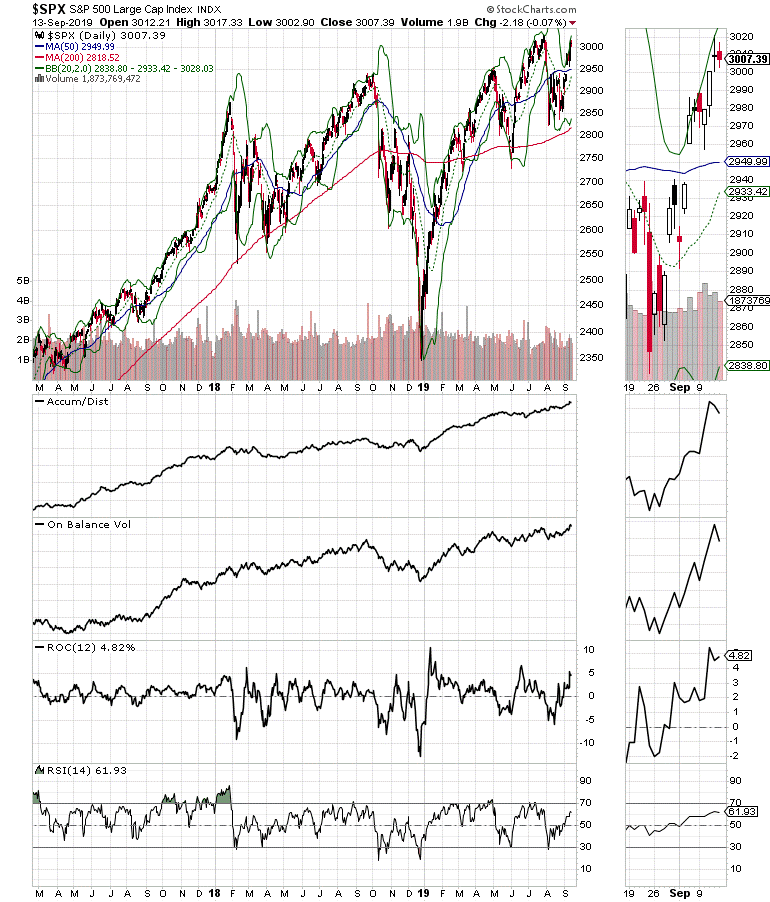 The S&P 500 is showing relative strength behind the improved money flow toward industrial, energy, and financial companies, while there has been a mixed performance in technology of late (see chart). 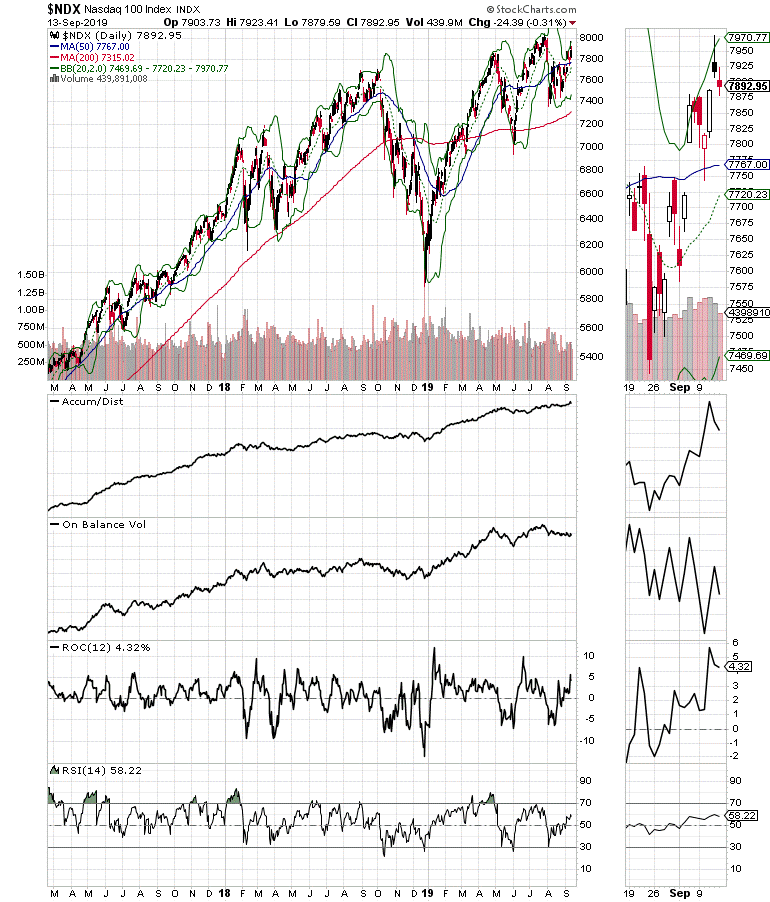 Still, both indexes are above their 20-, 50-, and 200-day moving averages signaling that the general trend in the stock market is up for now.

It’s certainly hard to gauge the future of our complex and adaptive world. A prime example of this dynamic is the weekend attack on Saudi Arabia. Nevertheless, based on the recent action in the financial markets, big money seemed to be betting that there was no U.S. recession in the cards.

Of course, nothing is certain, but if the bond market and stock markets do not fall apart in the next few days, it would be supportive of the view that the whole economic picture is going to change, which means that the sector rotation we saw over the last few days might be just beginning. It also means that the Federal Reserve may or may not start a long-term rate reduction cycle, especially if the U.S.-China trade talks result in something that resembles a trade deal, or how the situation in Saudi Arabia works out.