White House Insider Trading Claims Appear to Be a Hyperbole

A story that claims insiders at the White House are profiting financially by trading ahead of major announcements does not appear hold up under scrutiny, reports Al Brooks.

There is always going to be insider trading. William Cohan is a reporter for Vanity Fair and he wrote an article this week about some trading that he thinks might involve insider trading and the White House. He was on CNBC’s Fast Money on Thursday and discussed his findings.

He said that traders told him that there was a pattern of big orders being placed at the end of some days just before Trump made an announcement about the China trade deal. While not concluding that Trump or his people are trading illegally, he thinks that these trades need to be investigated. He gave three examples. I will discuss the first two.

He said that on June 28, “An investor or group of investors bought 420,000 S&P E-mini contracts minutes before the close.” He concluded that they probably made about $1.8 billion in profit over the next few days.

He also said that in the last 10 minutes of trading on Aug. 23, “386,000 S&P E-mini contracts crossed the wire.” He said the profit was likely about $1.5 billion over the following days. His conclusion was that there might be a coordinated effort from illegally informed individuals to profit from Trump’s upcoming tweets.

There is another problem with his reporting. The average volume over the last five bars every day is 100,000 or more contracts. You have to assume that at least 100,000 contracts in both of his examples was from routine trading unrelated to insider trading. Also, maybe another 100,000 contracts were from algorithms reacting to the purported unusual trading volume. Therefore, the profit from the possible fraud is considerably less than he is saying. I assume he chose hyperbole to improve his brand. Maybe there will be a book or movie deal soon. 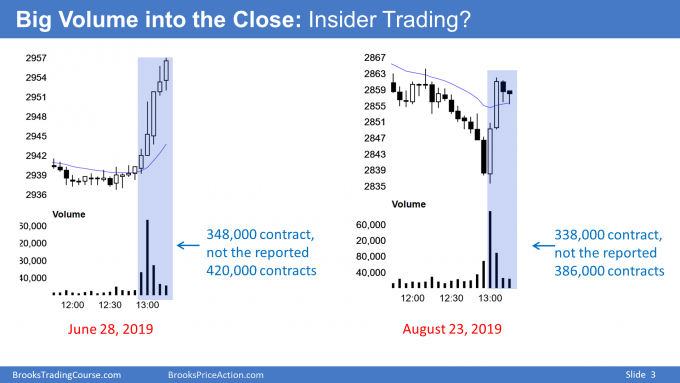 There might be 100 people who know that President Trump will soon release a tweet on China and trade. Also, China knows what Trump will say as well. Are all of these people honest?

It is likely that there is insider trading going on. It was likely under President Obama and under every president. Take hundreds of very aggressive people with huge egos and inside information. Does anyone expect them all to be honest?

However, past administration would take much more care to not make the types of bold statements that are likely to push markets and specific sectors. There is more opportunity in this administration because President Trump does not seem to care that a statement or tweet he posts could disrupt markets—and would allow someone with foreknowledge to profit from it.

These are sophisticated people and they do their insider trading in ways that are very difficult to discover. They can use shell corporations, overseas accounts, multiple middlemen, and related assets

For example, a trader could use the information to buy a huge amount of stocks or futures on multiple foreign exchanges. That would immediately cause buying in the E-mini from firms with algorithms that instantly arbitrage against moves around the world. The E-mini volume would then be from firms simply arbitraging against some international move and not from insider trading.

Conclusion: Yes, there is insider trading in the White House

Cohan’s fundamental point is correct. People are probably illegally profiting from inside knowledge of President Trump’s tweets before they are released. That type of illegal activity is true of every White House. And in Congress, and every governor’s office and every mayor’s office.

However, since he is not precise about his data and he is sensationalizing the obvious, I do not think that his examples are newsworthy. I am surprised that Vanity Fair and CNBC did not fact check his claims beforehand.