Don't Fear the Headlines: But Watch the Fed's Repo Market

The economy appears strong despite multiple headlines of doom, writes Joe Duarte, who says the only thing to fear is a potential liquidity crisis at the FED.

Algorithms can talk themselves into just about anything these days, creating a hair trigger market. But if we adapted the lyrics of “Don’t fear the Reaper” fame and still active rockers Blue Oyster Cult to the moment we may all want to sing: “Don’t fear the Headlines.”

Clearly, we are in the longest bull market in history. Thus, the conventional wisdom is expecting a recession, a housing bust, and an accompanying stock market crash. Yet, history doesn’t repeat, it only mirrors or approximates events. Even though the plausibility of such a scenario is certainly present, the threads of tangible evidence to confirm the expectations of an economic collapse are just not coming together yet.

Don’t get me wrong. The proverbial iceberg, with its tip lurking below the surface, could rear its ugly head at any time. Just pick a potential cause from the bountiful basket that is available. Aside from the politics in Washington, consider the weakening Chinese economy as the trade war rolls on. How about Brexit and Syria? Or maybe riots in Chile and Barcelona. And yes, the recent decline in retail sales is not a bright spot in the U.S. economic landscape.

Thus, in a disorderly world and a market full of fear of the unknown, headlines often create dramatic price moves.

But since economies are as dependent on psychology as they are on the opinions of the punditry the vagaries of economic data, and algo-trading programs, in the real world as long as people can work, pay their bills, and have some money left over to enjoy a bit of life, the odds of a recession remain less than what the experts may be expecting. And when people are doing ok, it extends into the economy and the markets. In other words, regardless of the headlines, the algos, and the wild swings in the markets on a daily basis, what you see as an interested observer counts just as much and has a longer effect than the story of the moment and the daily price grind.

Moreover, what I’m seeing is solid truck traffic on the highways, more SOLD and Contract Pending signs on well-priced, not extravagant but attractive existing homes, as new home developments spring up and new home sales develop. I see ongoing highway construction, new apartment buildings rising and bringing in tenants everywhere, and a steady flow of out of state license plates on the freeways as people leave high tax low employment states to move to where the economy is favorable.

Of course, I could be wrong and the world economy could collapse. But what I see are signs of an economy in transition toward improvement in living conditions, and of ballot box surprises in 2020; not necessarily the signs of a looming recession.

Moreover, I see the Federal Reserve lowering interest rates for the foreseeable future, as regardless of their statements they don’t want a recession on their watch. And that may be the key to the whole thing because people want to pay less interest on long term purchases such as homes and will actually buy more goods such as furniture and appliances when they can get lower in store financing.

I see the most important economic indicator of the moment, the U.S. Ten Year Note (TNX) in a trading range between 1.45 and 1.9%, but I don’t see the range being broken on either end; barring a complete change in real life events beyond the news cycle such as a sudden and irreparable liquidity crunch (see chart(. In other words, the markets, although being buffeted by impatient algos and dramatic headlines, are still sending a wait and see message, not one of rising fear or uncertainty. 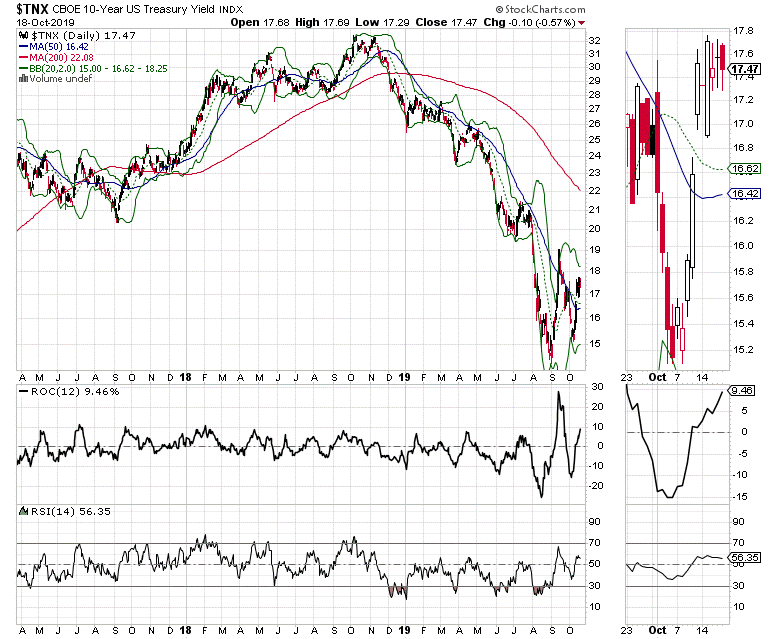 Meanwhile, for those looking for a stress point, consider the action in the ProShares Short High Yield ETF (SJB), which is designed to rally when junk bonds are in peril and being sold (see chart). As the chart clearly points out, SJB just made a new low, a posture which suggests that investors, rightly or wrongly, have yet to bail out on high risk debt. 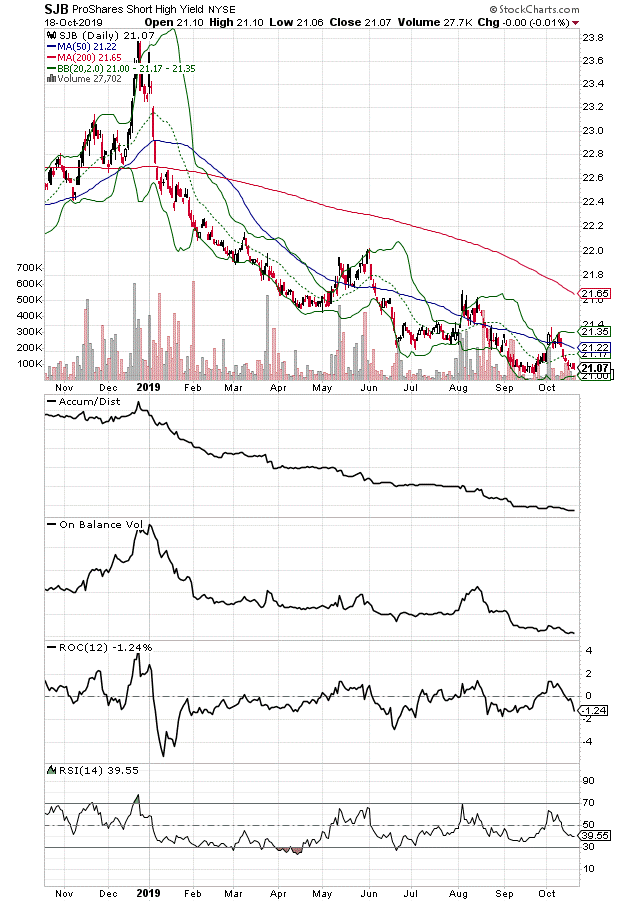 Accordingly, for every bearish point, there seems to be an equally valid bullish counterpoint.

What I’m saying is that in this market, we can still find winners. Moreover, successful investing and decision making in these challenging times requires patience and an understanding of the complexity of systems and how they behave. Specifically, stock picking in the present requires data input and analysis gleaned from kicking the tires in the real world, careful scrutinizing of price charts, and an understanding of company fundamentals along with the status of their current business as much as the input from macroeconomic data.

When a stock in a dead sector breaks out it’s worth noting, which is why I recently recommended shares of Valero Energy (VLO), a San Antonio based refiner and operator of convenience stores on both technical and fundamental grounds. 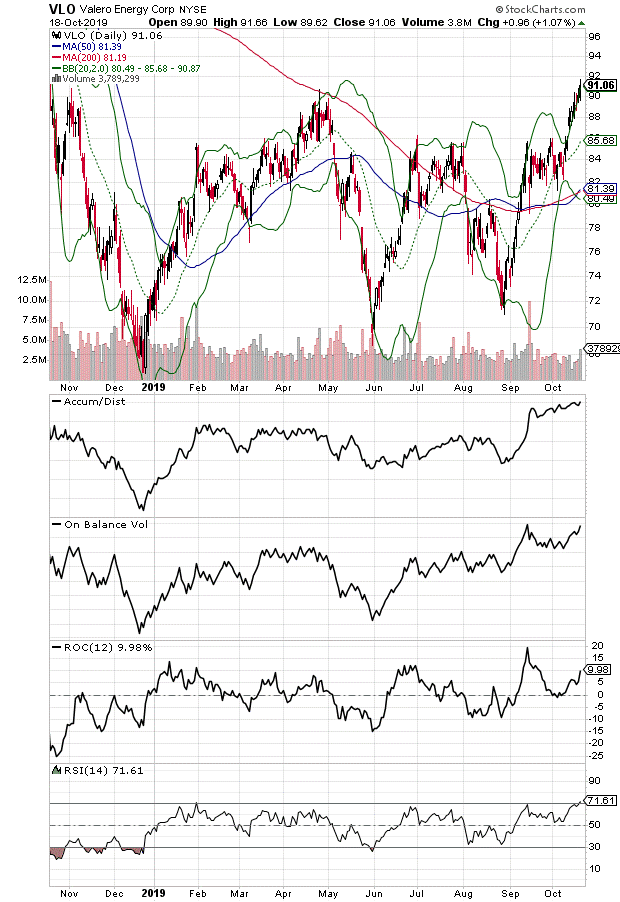 The energy sector has been in the doldrums as shale field overproduction has overwhelmed global demand. But even as the latest EIA data showed a huge build in oil supplies, there was a bigger than expected draw in gasoline and distillate supplies. This surprise in gasoline and distillate stocks, although partially due to seasonal phenomena, lit a fire under the already warm VLO shares.

Further digging, suggests that VLO may be in a better position than others in its field as it specializes in special fuel blends such as those mandated by clean air standards in California and elsewhere. More to the point, as fellow contributor Phil Flynn has pointed out, in January 2020 new fuel standards will be implemented in global shipping which means that a squeeze in ultra-low sulfur fuels may be near and that VLO could be in a good position to profit from that situation.

The stock has been moving steadily higher and has some resistance left at $92.50. But if it takes that out it can move to the high $90 area in the next few days to weeks depending on the news. On Balance Volume (OBV) and Accumulation Distribution (ADI) suggest money is coming into the stock with a sense of purpose.

The New York Stock Exchange Advance Decline line (NYAD), the most accurate indicator of the market’s trend since the 2016 presidential election made a marginal new high on Oct. 18, even as the Dow Industrials rolled over on bad news from Boeing (BA). This is a plus for the bulls. Moreover, NYAD has steadfastly remained above its 50-day moving average, which is also reassuring. 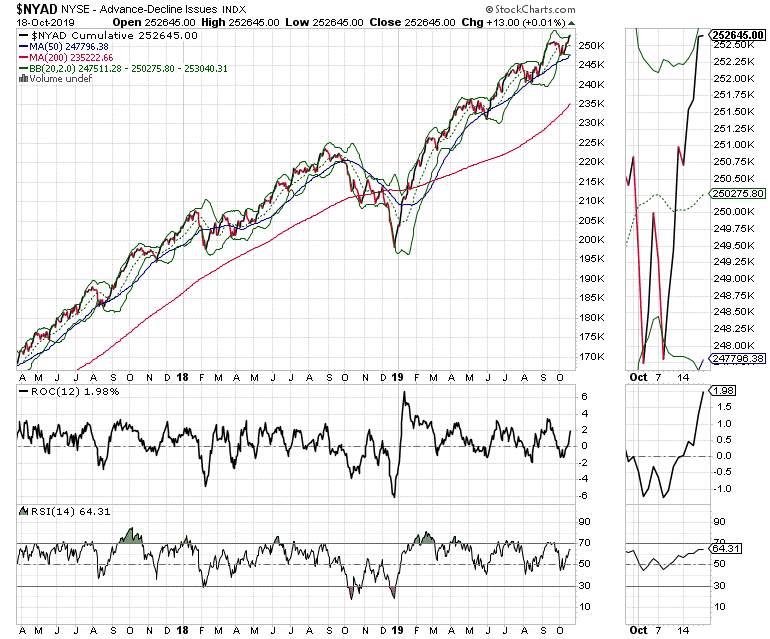 The S&P 500 (SPX) just missed making a new high last week but remained above key support levels of its 20-, 50-, and 200-day moving averages. As with other market indexes, worries about China and the general political uncertainty have kept this index range bound. 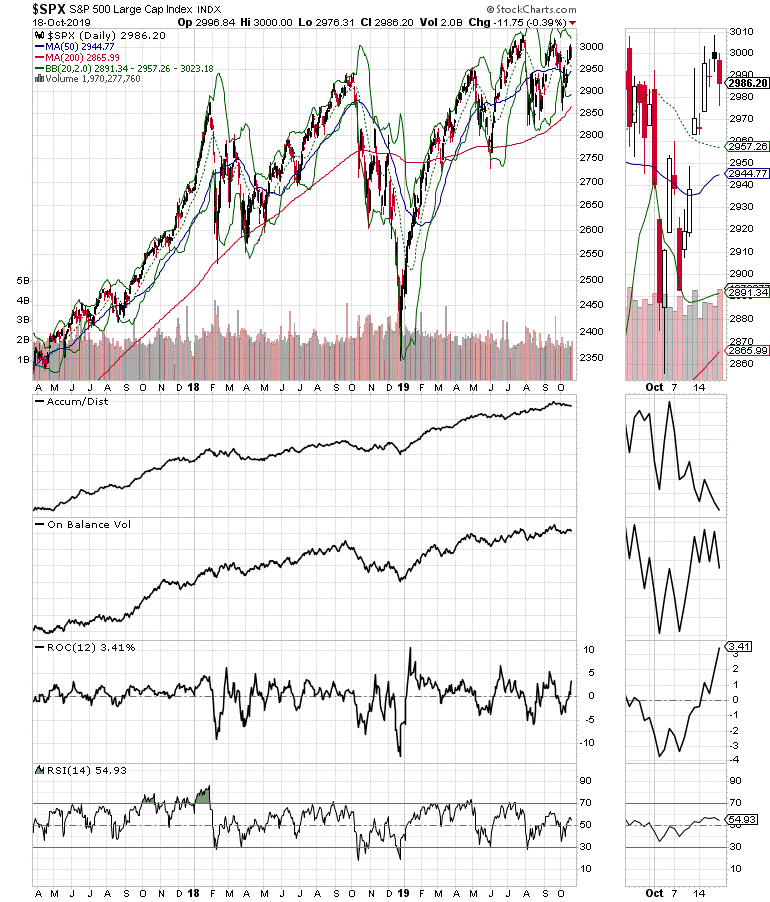 The Nasdaq 100 index (NDX) continues to suffer from weakness in technology stocks, especially semiconductors which remain in the down part of their multi-year cycle and worries about China. Still NDX is within striking distance of its all-time highs. Of some concern is the Accumulation Distribution (ADI) and On Balance Volume (OBV) for both indexes 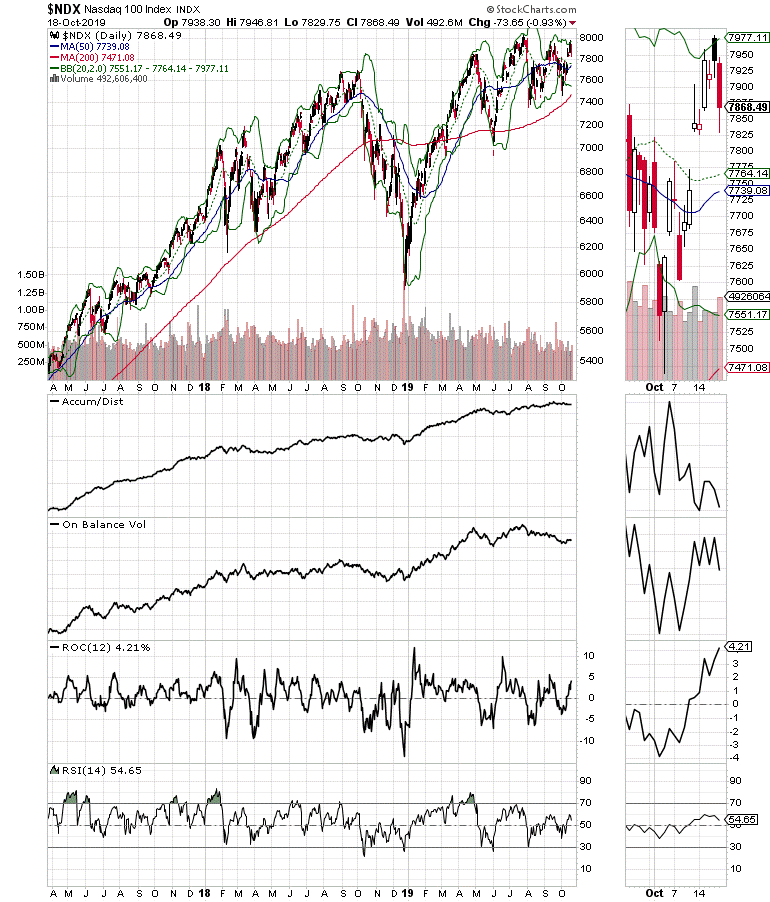 What should be Our Major Concern?

It’s not necessarily the economic data or what the stock index charts tell us that will be the biggest negative influence on our trading results. Indeed, because money is the fuel of the financial markets, if and when a bear market arrives, it will be because of a liquidity crisis.

Surprisingly, this liquidity crisis which may already be brewing may not initially be in the mainstream banking system. Instead it will most likely be in the “shadow” financing universe, where mortgage companies, hedge funds, money market funds and similar entities operate and where the Federal Reserve is trying to plug holes with its newly revived repo operations.

If the Fed is not able to improve the liquidity in this sector of the economy and the illiquidity worsens and eventually spills over to the mainstream banking system, we could see a situation which quickly spirals out of control and then affects the markets and the economy as in 2008 or worse when you add the specter of all the trillions negative yielding debt that’s out there.

Thus, the odds of a crash in everything will depend on how long it takes for someone of some stature to miss a payment to someone else and the chain reaction starts. Stay alert. Stick with what’s working. Hedge accordingly. And don’t fear the headlines unless they feature that “L” word.

I own VLO as of this writing.
Joe Duarte has been an active trader and widely recognized stock market analyst since 1987. He is author of Trading Options for Dummies, and The Everything Guide to Investing in your 20s & 30s at Amazon. To receive Joe’s exclusive stock, option, and ETF recommendations, in your mailbox every week visit here.