Stock Sell Signal Possible, but Upside Reversal Could Be Just as Sudden

Algorithm driven markets can swing on dime. Therefore, despite the recent volatility investors should not discount the possibility of another up leg once the dust clears in the next few days to weeks as the Federal Reserve won’t be raising interest rates or stopping its asset purchases anytime soon.

The writing has been on the wall for the past few weeks as the market’s breadth, as I’ve noted repeatedly, and as I will expand upon below, has been weakening. Nevertheless, even as it seems that dark clouds are gathering it’s also important to recognize that if the algos stick to their usual way of operating, when the market rebounds it will likely be as spectacular as the recent decline has been unsettling.

Stay Focused as Selloff Could be Temporary

It’s always disconcerting to watch an algo fueled selling binge materializes, but these days it’s a fact of life if you’re an investor. As a result, when prices start to decline rapidly, it’s important to keep a dual mindset. First, protect your current investments. But second, and equally important, prepare for the next change of the trend; the almost inevitable and eventually sizeable bounce.

Above all, consider the primary factor which favors higher stock prices, the Federal Reserve’s liquidity machine. It’s not going anywhere for the foreseeable future, which means that once the selling is over the algo programs that recognize the Fed is still in easing mode will likely kick in and prices will rebound. Moreover, with COVID-19 attempting to move to the background as a focal point for the moment, the U.S. presidential election and related issues such as the economy and social unrest now become the primary focal points on Wall Street and investors should expect continued price volatility, especially with polling data suggesting a tightening race and news items suggesting a highly contested post-election period.

Finally anyone who doubts the volatility thesis should look back to last week where a 450 point Dow Industrial Average gain was followed by an 800 plus point drop the next day and even more volatility on Sept. 4 as pre-holiday thin trading exacerbated the down side. But be that as it may, the story developing inside the market is just as important as what the indexes tell us. That’s because as investors vote with their money we can gather valuable information not just about the market’s general trend but also about where the money is flowing and where the odds of success are highest.

When allocating money into market sectors it’s useful to consider what the major theme that brings money into any particular sector is. For example, in the case of the iShares Nasdaq Biotechnology ETF (IBB), in the not so distant past money flow was most affected by the potential for COVID-19 vaccines and/or cures. And although initially the sector benefited from this trend, most recently money has been flowing out of this area. 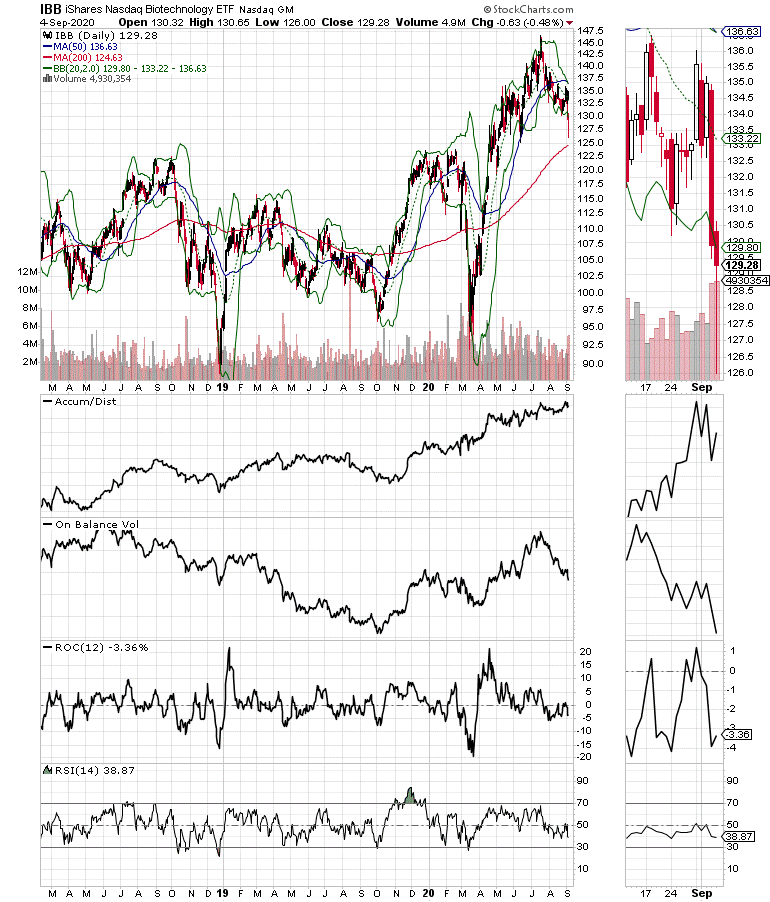 Digging deeper into the dynamic we can see the difference between two stocks and what the market is betting on. First, we can see that antiviral drug leader Gilead Sciences (GILD), whose remdesivir drug has recently received a broad approval for the FDA in treating COVID-19 does not have the market’s confidence. That’s because the studies show that remdesivir is barely effective against the virus and even though the company sold the government a large supply, the market sees little further gain from the drug (see chart below). 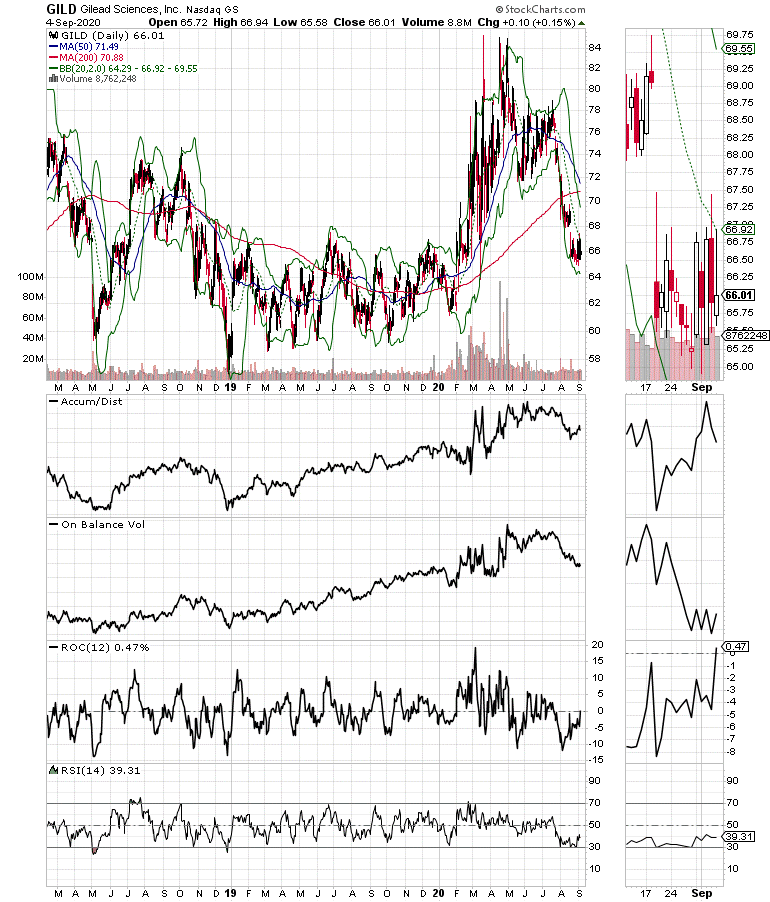 Meanwhile, the vaccine angle on COVID-19 is still somewhat viable, which is why Pfizer (PFE) is showing some relative strength given that the company expects to have what it considers a fairly definitive answer regarding its vaccine candidate by October. If the vaccine is effective PFE would likely have first mover advantage.

The problem, however, is that even if Pfizer’s vaccine is at least adequate in its ability to prevent COVID-19 infection and the FDA gives it accelerated approval, there is no way to know whether:

My point is not to deliver a scientific presentation, but to illustrate the level of analytical digging that is likely to be necessary when trying to invest in a market where the volatility and the risk, as exemplified by an 1100 swing in the Dow Industrials in two days are on the rise due to the election.

Meanwhile, there are plenty of other secular themes that are moving market sectors and individual stocks.

Two weeks ago it seemed that the bulls might have gotten a reprieve as the New York Stock Exchange Advance Decline line (NYAD) found support at its 20-day moving average and was within reach of a new high, a fact which would have confirmed the uptrend. 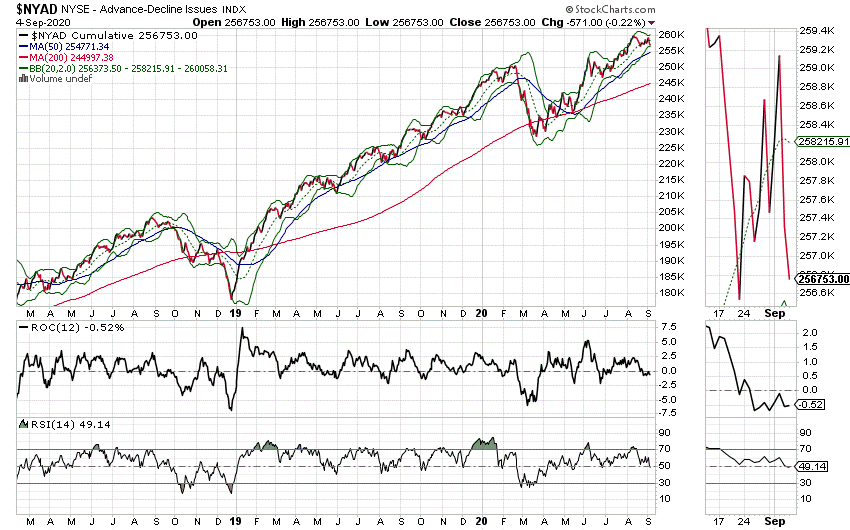 Furthermore, with the RSI indicator for NYAD breaking below 50, we now have to wait for confirmation from the 50-day moving average, which did not happen on Sept. 4, even during a very volatile market session. However, if NYAD breaks below its 50-day moving average along with the RSI’s fall below its 50 level, if it remains, we could well have a Duarte 50-50 sell signal and the odds of a full blown correction, if that were to happen would be very high. 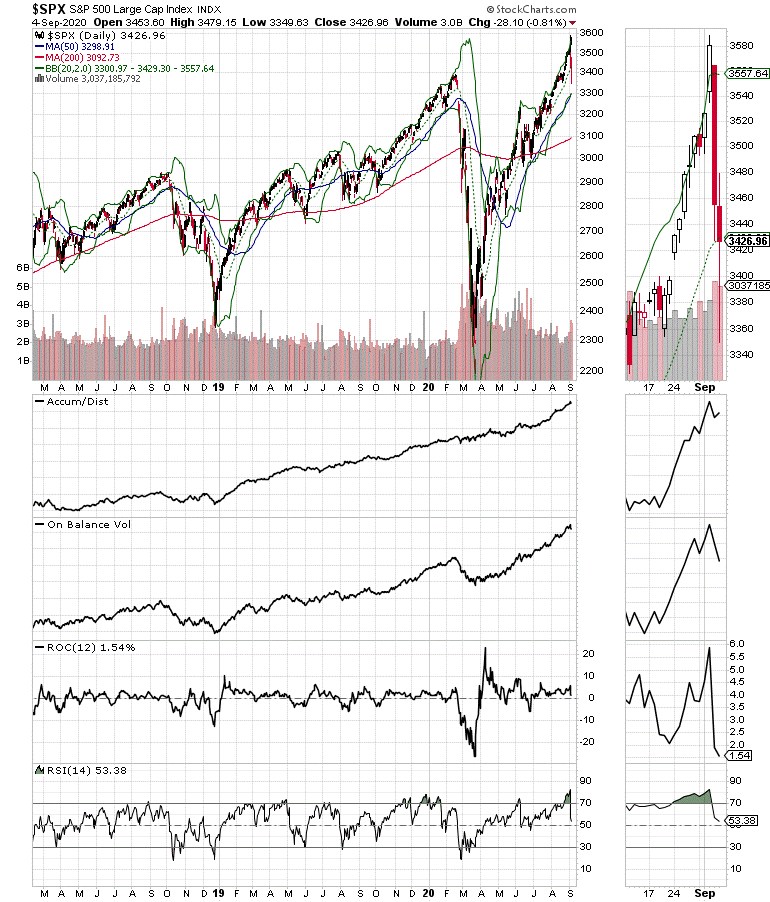 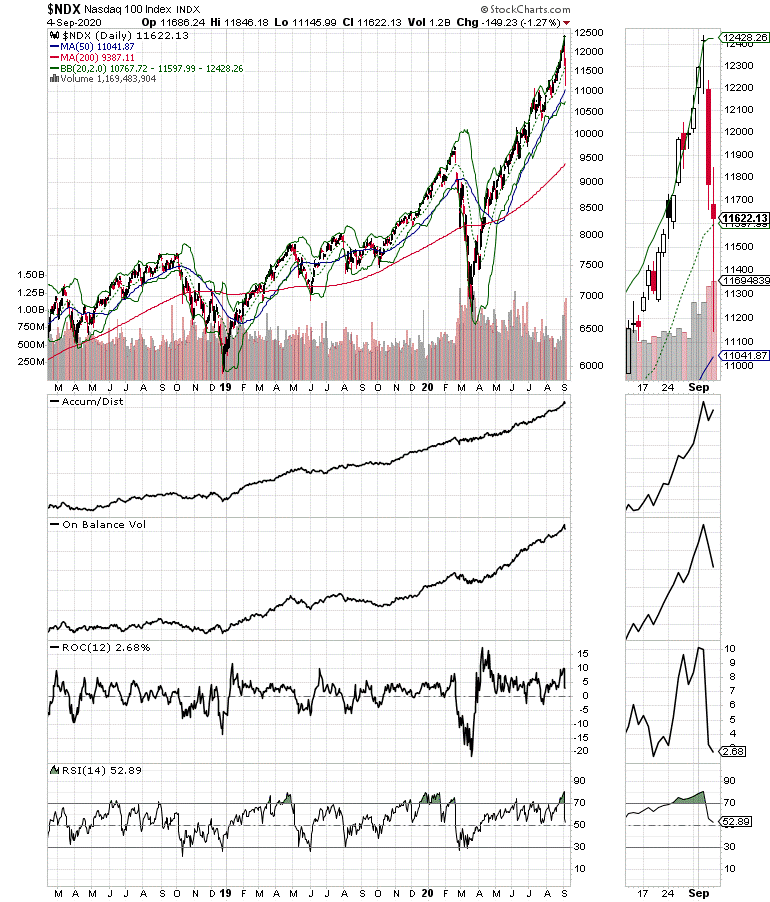 Still, as of the close of Sept. 4, the full signal had not developed, much as what we saw in July, 2020 after which the market recovered. Nevertheless, until proven otherwise, the uptrend in stocks is now suspect and prudent investors should be monitoring their sell stops or taking profits in order to boost cash levels.

Risk Management is the Number One Focus

Certainly, the Fed isn’t going to raise interest rates anytime soon, which means that until proven otherwise the stock market is more likely than not to have a floor of support underneath it at some point. Moreover, the fourth quarter of an election year tends to be bullish.

On the other hand, this market has come a long way over the last few months and the technical picture has been slowly weakening for several weeks. Putting it all together, it’s not hard to see that some sort of correction, not only has been overdue, but that it may actually be developing as we speak.

So as I said last week, what it means is that the best anyone can do is to trade wisely by focusing not just on the market’s trend but on the action in each individual position. It’s also wise to trade in small lots, to take profits when warranted, and to keep reasonably sell stops in place.

Meanwhile, as with any correction or pull back, the market is giving us an opportunity to put together a shopping list.

As this correction works its way through the markets I will be putting together a shopping list of stocks with huge upside potential when the dust clears.

To make sure you are there when the market gives us the all clear take a FREE trial or subscribe to Joe Duarte in the Money Options.com by clicking here. At the February 2020 Money Show in Orlando I correctly predicted that Covid-19 was likely to be a chaotic event and advised investors how to stay on the right side of the markets. Now as the stock market is starting to show signs of stress I am returning to the Money Show with my latest analysis and predictions. To learn how to manage what lies ahead and how to pick stocks with explosive potential in any market, join me at the Virtual Money Show Expo on Sept. 16, 2020. Go here to register Free of charge.