This Trade Gives You "Dividends" With GLD

There are a few asset types that typically serve as safe-haven investments—assets commonly used by investors when they are concerned about the market. Whether the concerns are economic or political in nature doesn’t really matter, observes Jay Soloff of Investors Alley.

The most common safe-haven investments are gold and bonds. A third category that isn't quite as popular is utility stocks. Utilities still tend to move in the same direction as other stocks, but with less volatility.

Gold and bonds, though, are often the best-performing assets during periods of market uncertainty, at least in terms of popular investments. Sometimes the strong performance of gold as a safe haven will extend to other precious metals, like silver. Historically, gold has been one of the first assets that risk-averse investors rush to buy in tumultuous times.

There’s a reason that the price of gold is up more than 17% year-to-date. Few years in recent memory have been as volatile as 2020. Between the pandemic and the presidential election, there has been more than enough risk on the table for the average investor. Still, the price of gold dropped roughly 5% in November, a significant decline for any asset over a single month.

The presidential election was a "known unknown" that is now past. Yet, the pandemic still rages on.

It's possible that the positive vaccine news has investors looking beyond the next six to nine months, to a time when the economy will presumably operate more like normal. It could also be that investors are simply dumping safe-haven investments into the year-end in preparation for a more bullish 2021.

Does that mean that gold's bullish run is over with? There's undoubtedly still risk on the table with the pandemic and its long-term impact on the economy. Yet, the market is very much a forward-looking entity.

At least one trader is using covered calls on SPDR Gold Shares (GLD) to initiate a neutral position on gold through February. GLD tracks the price of gold bullion and is one of the most widespread methods for investing in gold. 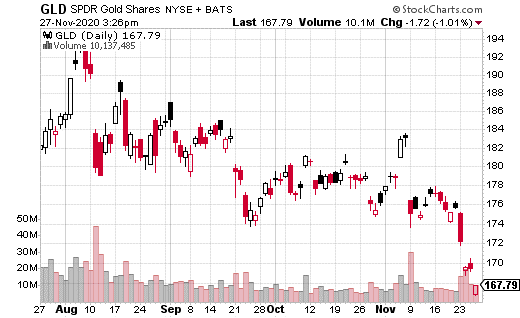 While the position can climb $2.45 before the cap is hit, the key to this trade is the short-call component. The call sales generated more than $2.1 million in premiums, working out to a 2.7% yield in just under three months—about 12% on an annualized basis.

Because GLD doesn't pay a dividend, this fund/trader just created its/his own dividend for the next three months. Plus, the position still provides an allocation to gold in the event of market uncertainty returning. While this trade isn't suggesting a rebound in gold over the next few months, it's also not a bearish view. Perhaps we should expect sideways gold prices for the time being…in which case covered calls are an excellent strategy.

Barrick Gold (GOLD) is the world’s second largest gold producer. It has been transformed since...

As we embark on a new year, let’s hope it’ll be better than last year. We think it will....