Trading an ETF as a Whole 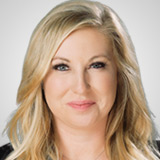 Let’s continue on our alternate energy/solar tickers topic that we’ve discussed the last few weeks by talking about a trade I took in Invesco Solar ETF (TAN), explains Danielle Shay of Simpler Trading.

Tan is the solar-powered ETF, and this was actually just a stock trade that I did rather than the options. As you might remember, when I used my Phoenix system a couple of months ago, I identified the fact that we had some really strong solar stocks (think alternate energy, that kind of thing). A lot of that had to do with the election. People were speculating that under a Biden administration, there would be a very favorable environment for solar companies.

So, what did I do to take advantage of this speculation...?

During my “Options Freedom” class, we went through and made a new Phoenix grid for my favorite all-time energy plays. One of those was TAN, the solar ETF.

Five-Star-Trader Tip: When you’re looking at an ETF as a whole (like TAN), if you go to etfdb.com you’re able to see which companies exactly are in that ETF.

Some of the companies that are in the solar ETF are:

And it’s no coincidence that these are some of my favorite solar names.

So, whenever you notice that there’s a new group that’s kind of all taking off together (like alternate energy), you can do a couple of things. You can pick an individual name and just trade that individual name. But what I like to do in my long-term accounts is just buy the overall ETF. With a long-term account I’m not necessarily looking for all the volatility that I want to see in the options market to make money with a leveraged product…instead I just want to be invested overall in a group.

How the Trade Played Out:

The way I approached this trade initially is something you might recognize from other previous Tuesday Trades like JKS, FSLR, and CSIQ, which I’ve been trading in the options market. However, in my Stacked Profits Mastery I also do ETF and stock buys. All these trades have some basic similarities. 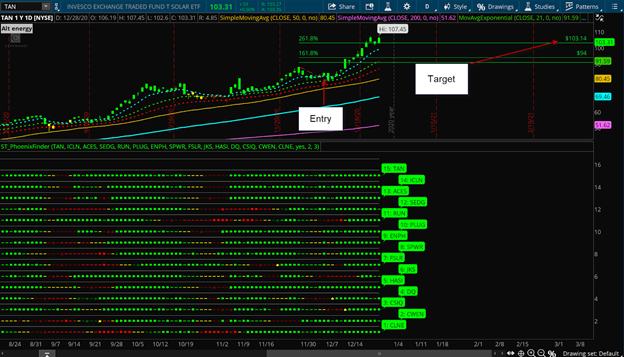 Basically, what I did is I bought some shares for both my son, Leo’s, account as well as my own long-term account. At this point, I don’t really consider it a quick trade. In fact, based on my analysis, I actually think that this group is going to continue to do well. So, I’m going to continue to hold some shares long-term. Now if this thing pulls back to around the 90-95 price point that's a spot that I’d actually look to add too.

This is what makes the Phoenix system so powerful. You’re able to use it for short-term plays, which you see me talking about a lot, but you can also use it for long-term plays like this one in TAN.