Thanks to the Federal Reserve and the ever-present “Buy-the-Dip” crowd, I don’t expect this market’s uptrend to pause for long periods of time in the foreseeable future, states Joe Duarte of In the Money Options.

Of course, it would be foolish to assume that any pause, regardless of its duration would not be potentially painful. In other words, this volatile stock market is most likely to continue to grind higher, albeit in fits and starts influenced by the news cycle, as well as scheduled events such as last week’s options expiration.

Certainly, this type of trading, especially in an overvalued market can make short-term trading quite challenging. But that’s what’s happening, so those who trade for a living will have to continuously evaluate conditions and adjust their strategies and expectations accordingly.

And just to add some icing to the volatility cake, the tug of war between the Federal Reserve and the bond market will likely add to the uncertainties of the year.

The financial story of the year could well be that US Treasury bond yields may move decidedly higher. So far, the story remains viable, despite two good Treasury auctions last week, which knocked yields down from their recent highs. 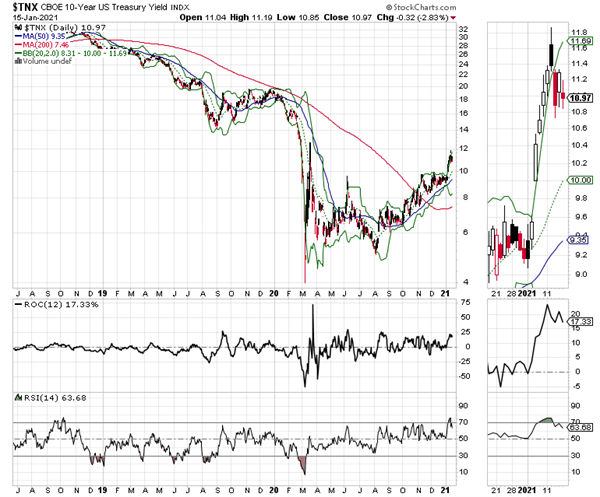 Yet, by Thursday and to some degree Friday during the day, the sellers were back in business as the expectations of more government fiscal stimulus and the stealthy inflation seen in commodity prices once again exerted their influence.

Here is what we know about the US Ten-Year Note yield (TNX):

Still, even if bond yields fail to rise meaningfully from here, it seems likely that the bond market is no longer in an all-out bull market as it has been for the last decade. And certainly, there is no way to know how this is going to play out. Moreover, with the Fed still pumping money into the banking system and with no solid sign of a return to employment growth, the usually dominant factor, which stokes bond yields, a lot will depend on inflationary expectations.

Thus, all we can say is that the odds favor a potential for a lasting change in the long-term trend for the US Treasury market. And if that’s the case, then it is also plausible to expect a change in the stock market. Whether that is a change in the trend or a change in leadership is a viable question and something that may take some time to be fully apparent. At this point, as I note directly below, there is clearly a very notable change is the action in the financial stocks, which suggests the market is betting on a leadership change and a sector rotation.

Shares of upscale credit card bank American Express (AXP) have been moving steadily higher despite news of a Federal probe that is reportedly in its early stages. The probe alleges inappropriate sales tactics aimed at business owners whom the company was targeting as potential cardholders. Yet the stock is moving higher, which suggests that either the probe is not likely to go anywhere, or that perhaps the expectation is for a low-level penalty, which allows the company to move on. 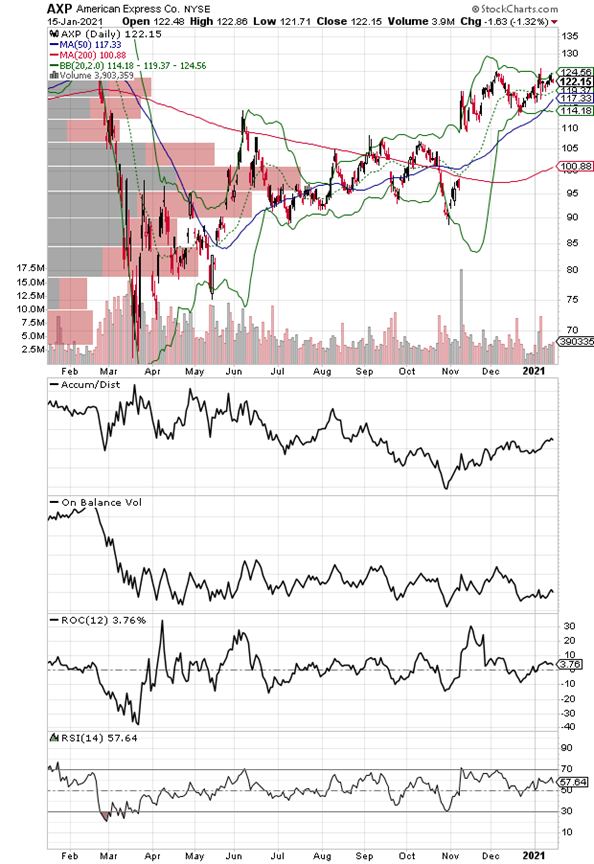 Aside from that, however, AXP is interesting because of its customer base, a group which has been known to travel and to own businesses. As a result, the stock, along with the rest of the financial sector is likely to at least be partially moving on the expectation of a return to some level of normalcy as the COVID-19 vaccine rollout continues. Moreover, a factor that is little noted is that recent Fed rules allow financial companies to buy back their stock just as their credit card delinquency ratings improved at the end of 2020. Thus, the stock is likely to have a floor under it as AXP is in the midst of a 120-million share buyback program, which started in September 2019 and is expected to continue until September 2022.

Technically, the stock is under steady accumulation with Accumulation Distribution (ADI) turning up, while On-Balance Volume (OBV) has bottomed out. The stock is trading well into the Complexity zone (above its 20, 50, and 200-day moving averages) and has very little resistance overhead above $125.

So here is the bottom line:

I own shares in AXP as of this writing.

The New York Stock Exchange Advance Decline line (NYAD) broke out to impressive new highs during the first week of 2021 and delivered more on week two, notwithstanding the pullback on 1/15. Thus, the operative word remains that the trend in the market remains up. 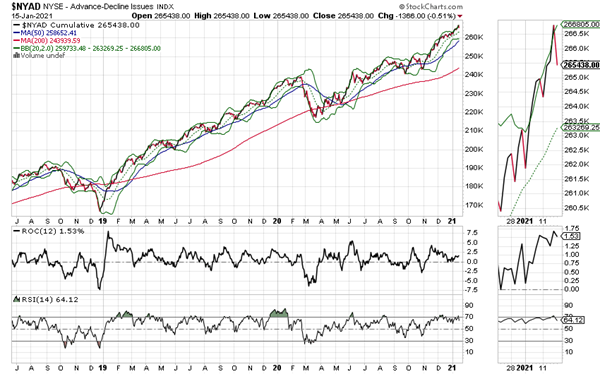 Of course, as I noted above, I expect the market to be increasingly volatile, but the key to the trend is whether NYAD remains above its 50-day moving average on any pullback. If the 50-day is broken decisively the next test would be the 200-day.

The S&P 500 (SPX) rolled over by week’s end and could see some short-term choppiness as the news cycle develops over the next few days to weeks. 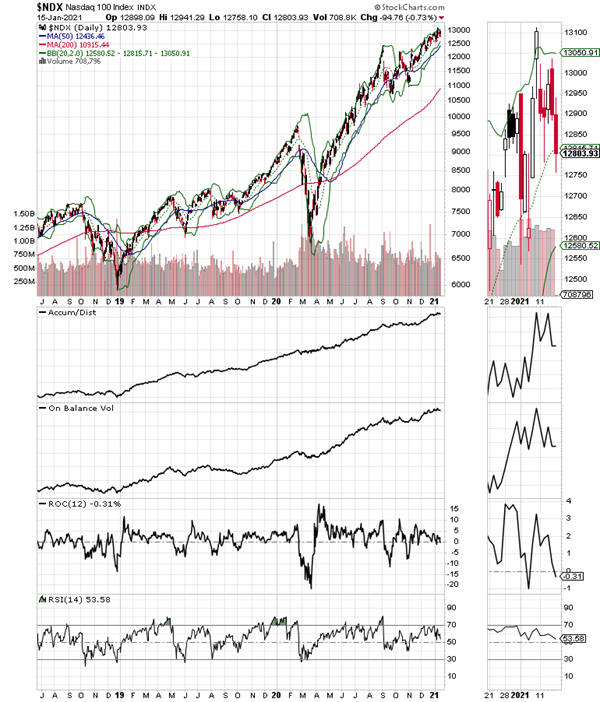 The Nasdaq 100 index (NDX) is joining SPX and NYAD in its general trend. All of which means that for now the large-cap tech stocks, as a whole remain in an uptrend. However, when you look under the hood, there seems to be a rotation under way.

It’s Likely to be Another Spectacular Year

Volatility will increase in this market, especially if bond yields continue to rise. That said, until the Federal Reserve pulls the rug out from under the market, the odds favor an upward trend in stocks.

Nevertheless, profits will only come to those who can find the right sectors and stocks to own as well as when to take profits, and when to buy on the dips.