Amid the noise in the markets last week, Friday afternoon saw an interesting development, states Joe Duarte of In the Money Options.

Even though the major indexes were decidedly lower, the New York Stock Exchange Advance Decline line (NYAD), as I will fully describe below, delivered an up day. This, unless it is aggressively reversed, is a positive divergence, which may be signaling that stocks may move decidedly higher in the short term.

The markets continue to live in an isolated world where the Fed’s QE is the dominant factor, which means that as long as the Fed remains accommodative, the odds of stocks going higher continue to be favorable. Proof positive of this dynamic is the fact that last week’s PMI showed inflation rising at the producer level due to supply chain disruptions and the effect on both stocks and bonds was essentially nil as earnings season gathers steam.

Thus, even though there may be some warning signs in the economy (weekly jobless claims remaining stubbornly above 900,000), and no real clarity about the status of the COVID-19 pandemic, the Fed remains the dominant factor and the market a favorable place for those who can find the right sectors and stocks to invest in. One of them, as I discuss below may be what could be a resurging housing sector.

Back in the Saddle: Homebuilders Rebound as Bond Yields Consolidate

After being a homebuilder stock bull for most of 2020 I have been unsure as to what to do with them over the last few weeks as the US Ten-Year Note yield (TNX) had been steadily climbing and the homebuilders have been lagging the general trend of the stock market. However, the combination of a consolidation in yields, see below, and a bullish surprise in terms of housing starts for December seems to have relit the fire under the group, at least for now.

Thus, unless something changes, at least in the short-to-intermediate term, it looks as if the homebuilder sector may be back the saddle. In fact, I recently recommended purchasing shares of homebuilder Hovnanian Enterprises (HOV) as the stock looks poised to break out from its recent trading range. 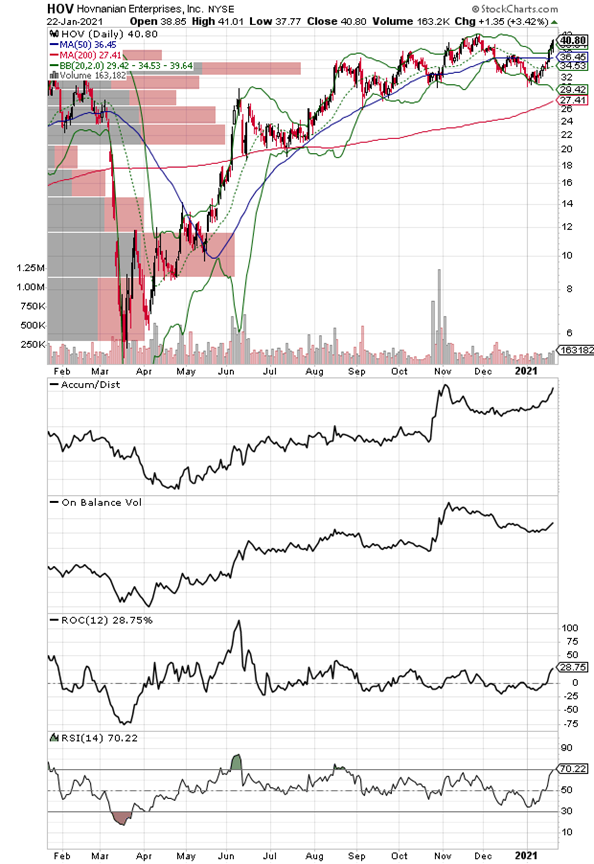 Since then, Hovnanian is slightly different than other homebuilders in the sense that until 2020 it had some difficulties with its finances, which have now been reversed as of Q2 when the company delivered a $4 million profit compared to a $15 million dollar loss year over year. 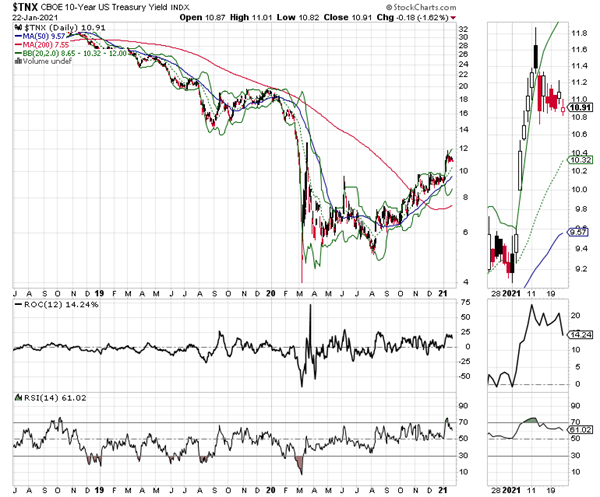 For its part, TNX seems to be in what could be the early stages of a consolidation pattern between 1.0 and 1.2%. Moreover, given the bullish action in the homebuilders last week, investors are willing to take a chance on the sector as long as bond rates remain in this trading range. So, if this relationship remains intact, I expect the homebuilders to complete their breakout and to move decidedly higher as long as bond yields remain in this trading range. It is also possible that if bond yields break below 1%, we may see an acceleration of the rally in Hovnanian Enterprises (HOV) and perhaps other homebuilders. Even more important will be what happens if TNX, the benchmark rate for most mortgages, starts to climb again.

I own shares in HOV as of this writing.

The New York Stock Exchange Advance Decline line (NYAD) delivered a small positive divergence to end last week. NYAD broke out to impressive new highs during the first week of 2021 and delivered more on week two and moving higher in the early part of week three. But as week 3 closed, the sellers came out from hibernation and NYAD showed signs of rolling over. Gladly for the bulls, buyers came in late in the day on Friday and what was shaping up to be a very negative two days was reduced to what for now seems as if it might turn out to be profit taking.

Certainly, some caution is warranted as there is plenty of gloom and doom out there with chatter about options-related volatility and bond yields, which are well off their bottoms combining to throw a wrench into the market. Still, what we’ve learned over the last four years is that walls of worry turn into buying opportunities as the Fed’s QE continues to be the dominant factor influencing stock prices. 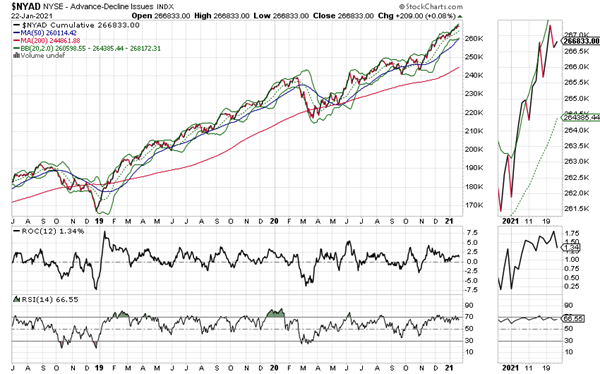 Of course, as I noted above, I expect the market to be increasingly volatile, but the key to the trend is whether NYAD remains above its 50-day moving average on any pullback. If the 50-day is broken decisively the next test would be the 200-day.

The S&P 500 (SPX) confirmed the bullish action on NYAD in the early part of the week but ran into profit taking on Thursday and Friday. But for now, the trend remains up with good support at the 20-day moving average.

In contrast, the Nasdaq 100 index (NDX) is overextended with two consecutive closings above its upper Bollinger Band (upper green line surrounding prices). This is a sign that the index is likely to move back inside the upper band and either consolidate or correct. At this point, however, it’s hard to tell whether any correction, if it actually develops, will be meaningful or not.

This market continues to behave as a surprisingly strong bull market. Indeed, just the fact that I write this type of statement every week now is worrisome in and of itself. But no matter how much anyone worries, stocks find another up leg as the insatiable dip buyers materialize.

It can’t last forever, but there is little evidence that it will end anytime soon. And when it does, I hope the market shows reliable signs of such an event ahead of it happening.

Otherwise, we continue to follow the trend and see what happens next.