The news of repercussions from the GameStop short squeeze included expectations for a short squeeze in the silver market and other potential developments, states Joe Duarte of In the Money Options.

Man, 2020 was getting a good start if you owned stocks as the Fed’s QE wind continued to blow favorably into the bull market’s sails. But in a heartbeat the world changed last week as these potential trend-changing events developed:

So, with the day traders creating what some are calling an “inmates running the asylum” scenario and the technical deterioration of the market accelerating on Friday, we must ask whether historical precedents in the market regarding what can be done in case of systemic liquidity crisis are still applicable.

Moreover, we must ask whether the situation at Robinhood and related brokerages as it pertains to the so-called GameStop (GME) short squeeze has reached critical mass. In other words, have one or more critical players in the payment chain: brokers, clearing houses, or very large institutions become illiquid and is thus not able to make good on its obligations. And if such a situation is developing, how much worse will the problem become as risk stemming from options and/or unknown over-the-counter derivatives becomes operational and apparent and the selling spreads to not just stocks but other markets?

Certainly, if things escalate the risk that the banking system would freeze would rise significantly. In that case, the Federal Reserve would be expected to step in and provide ample liquidity in order to jump start transactions again. Moreover, it is imperative to reiterate that the market is now the dominant component in the Markets, Economy, and Life (MEL) complex adaptive system, which means that a market freeze could soon develop into an economic freeze.

So, if events unravel, what is the definition of ample when the Fed is already pumping $110 billion into the banking system every month? Is the answer $500 billion? $600 billion? A $trillion? More to the point, over what period of time should the liquidity be infused: three days, two hours, five minutes? What is the whatever it takes point now?

Even more pressing is the notion that with the Fed pumping $110 billion into the financial system every month along with its promise to keep doing so indefinitely, then why are bond yields rising as the dollar seems to be bottoming out? I discuss this in detail below.

Buy the Dip or Take Profits? Leidos Sets up Test of Key Support

One thing is for sure, there are other stocks to consider aside from GameStop. For example, even as the defense sector has struggled for the past 12 months, software and engineering firm Leidos Holdings (LDOS) has been moving steadily higher since it bottomed out in October 2020. Sure, it weakened a bit in the last few days as the market’s worries have increased, but there is nothing specific about this company that is known that would account for a reason to sell the stock aggressively.

Of interest is the fact that Leidos’ business is as enigmatic as are sectors in which it does business: defense, national security, and civil government contracts with a sprinkling of healthcare IT, including contracts with the Center for Medicare and Medicaid (CMS). But perhaps what it is best known for is its national security software and defense contracts with the Army and the Airforce. And to be honest, no one knows what those entail due to national security issues. The company certainly hints at some potential uses such as data gathering and critical decision making, but beyond that we don’t know too many details beyond the fact that Leidos makes big bucks from the US government. 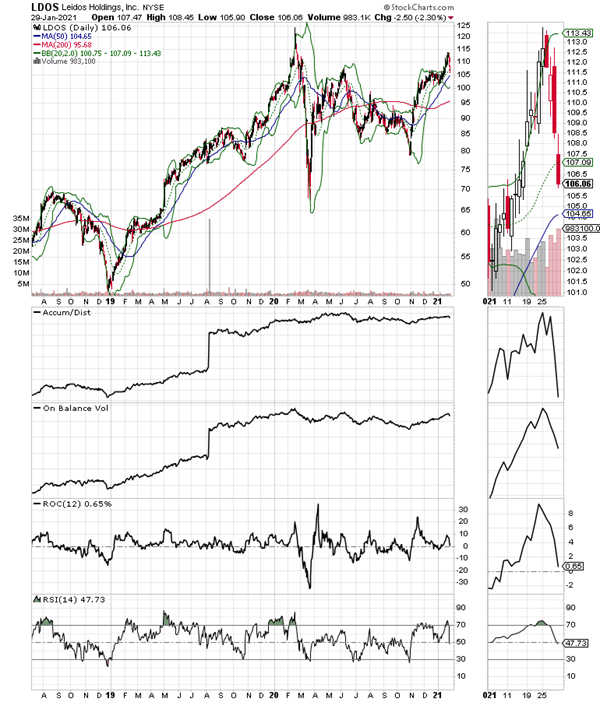 What is not shrouded in secrecy is the fact that Leidos has a tendency to beat earnings expectations on its earnings on a regular basis, such as the last seven quarters. Moreover, its key metric is its contract backlog, which as of the last earnings call stood at over $30 billion.

The company’s next earnings report is due on February 23, 2021, which means that the market has plenty of time to anticipate the results, which according to management were likely to be positive. Obviously, the odds of a beat are above average, given the company’s record. Yet, in an uncertain market, it’s not a bad idea to keep a close eye on the shares and keep a sell stop some 5-8% under recent highs.

Still, given the market’s recent volatility even a stock which had been in a steady uptrend such as Leidos showed some weakness on 1/29/21. In fact, the previously robust Accumulation/Distribution (ADI) and On-Balance Volume (OBV), rolled over, which raises the question of whether the 50-day moving average is still good support. We will know soon enough.

I own LDOS as of this writing.

The New York Stock Exchange Advance Decline line (NYAD) reversed its prior week’s fledgling positive divergence and ended up with what may turn out to be an all-out Duarte 50-50 Sell signal as the RSI closed below the 50 level and NYAD itself closed below its 20-day moving average and looks set to test the support of its 50-day line. 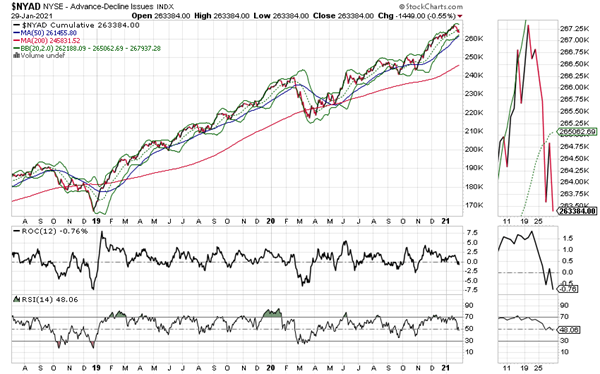 So now we wait to see if NYAD remains above its 50-day moving average on any pullback. If the 50-day is broken decisively the next test would be the 200-day. 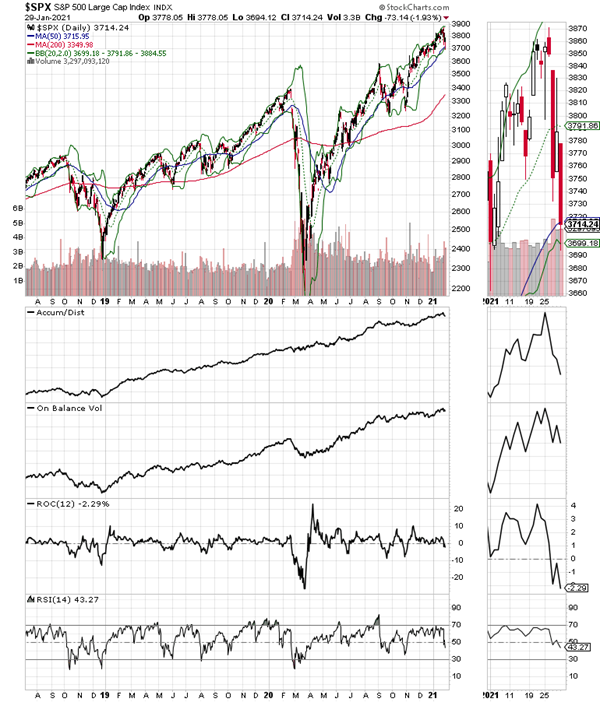 For its part, the S&P 500 (SPX) also delivered a nasty reversal and closed the week just at its 50-day moving average, which means that a major test of the uptrend is now unfolding. 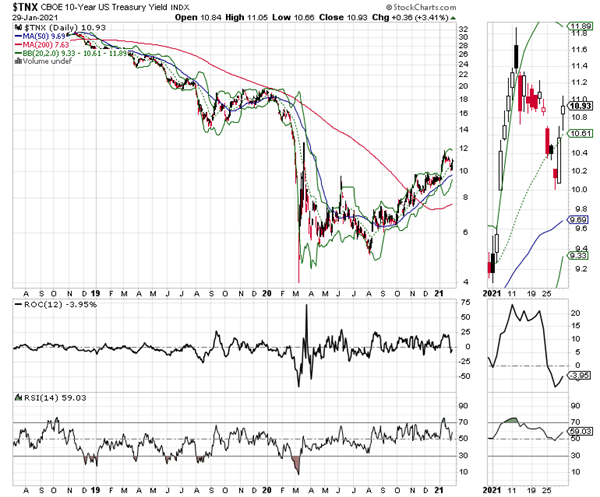 The Nasdaq 100 index (NDX), which as I noted last week was overextended with two consecutive closings above its upper Bollinger Band (upper green line surrounding prices), became more over extended by delivering two more closes above the bands early in the week before delivering an aggressive reversal, with likely tests of its 20 and 50-day moving average likely. 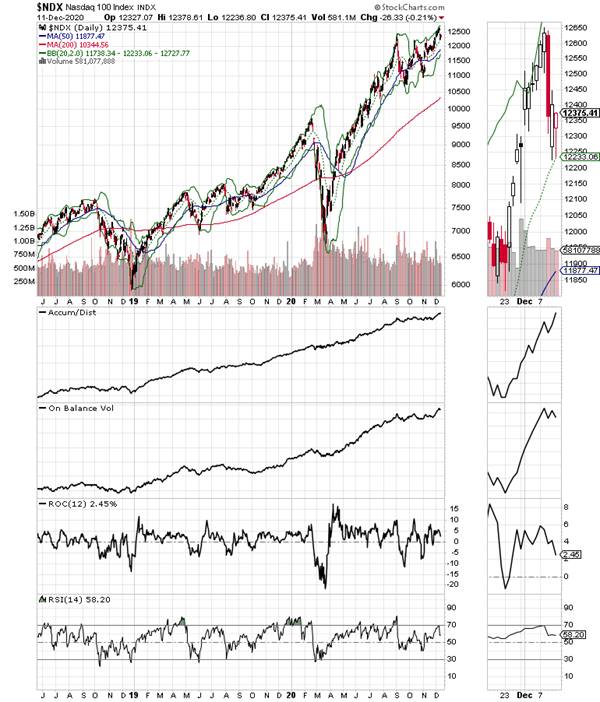 And here is where it gets interesting. When there is stock market trouble, bond yields usually fall as investors move to the safety of Treasury bond. Yet, as the GameStop short squeeze hype developed, bond yields which had been heading lower, bounced back and are testing key resistance. This is of concern as the Fed’s current pace of T-Bond purchases doesn’t seem to be enough to keep a lid on yields. So, if the US Ten-year note (TNX) can pull above 1.10% and make its way through the 1.2% area, the bond bear market will be well established and its effect on the stock market will be noticeable. 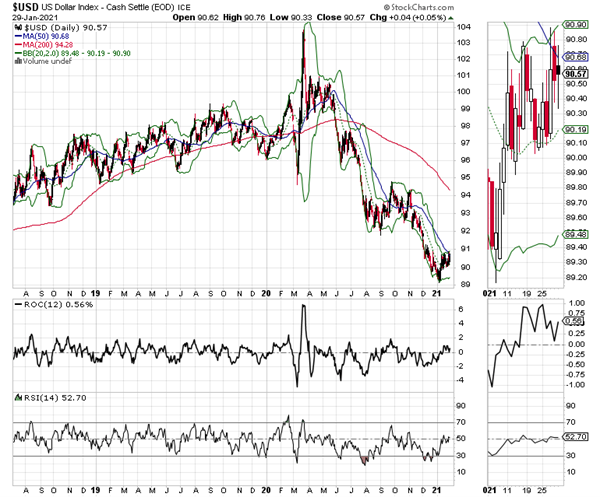 Finally, the US Dollar Index (USD) has been quietly trading above $90 for the past few weeks. This is a long-term support level, from which long-term dollar rallies often launch. It is not a coincidence that bond yields and the dollar have bottomed close to each other. In fact, rising bond yields are usually a driver for a rising dollar.

So, what’s my point? If traders are dumping bonds and buying dollars it could mean that really big money is starting to bet on rising interest rates, which means that the Fed’s long-term plans to keep interest rates near zero for the foreseeable future are being questioned by the market and something will have to give.

This Is No Time to Be Complacent

Is a bear market coming? I sure as heck don’t know, but it feels as if things are suddenly different in the financial world.

For the past few months, I have written about how the bull market in stocks is intact because the Fed’s QE has kept the bulls in control. But I have also noted that caution is warranted.

Just last week, referring to my frequent statements about the Fed and the market I wrote: “Indeed, just the fact that I write this type of statement every week now is worrisome in and of itself.” In fact, I added “no matter how much anyone worries, stocks find another up leg as the insatiable dip buyers materialize. It can’t last forever, but there is little evidence that it will end anytime soon. And when it does, I hope the market shows reliable signs of such an event ahead of it happening.”

Well, given the current signs, the market is signaling that a meaningful correction may be unfolding. And yes, it is just as plausible that the Fed will find a way to once again juice stocks by increasing its QE. However, if the Fed tries a more of the same approach, even on steroids, and it fails, we may see some very negative situations develop.

Thankfully, from a strategic standpoint, many of the stocks in our model portfolio have already been stopped out, thus raising our cash levels. Our recently added hedges are acting well. And as usual, when the market falls meaningfully, I take the opportunity to make a shopping list. So now, we wait and see what happens next.