How Does the US Federal Funds Rate Affect the US Dollar?

It goes without saying that many traders attach a great deal of importance to the forex economic calendars, states Konstantin Rabin, editor at InsideTrade.co.

One of the most important items in those calendars is the monetary policy meetings, statements and decisions by the US Federal Reserve. In fact, those events are typically marked with a high degree of expected volatility.

This sort of expectation is usually quite accurate in most cases. In fact, during those events, the currency pairs involving the US dollar tend to become much more volatile. In fact, it is indeed very common for the given currency pair to rise or drop by hundreds of pips in response to the latest statements, press conferences, and decisions coming out from the US Federal Reserve.

Consequently, it is indeed safe to conclude that the policies and statements of the US Federal Reserve chairman and its board members can have a sizable influence on the value of the US dollar. When it comes to it, one of the most important indicators for predicting the USD exchange rates is so-called the federal funds rate.

So how does this impact the forex market? Well, the general rule here is that when the US Federal Reserve decides to hike its key rate, generally speaking, it tends to strengthen the US dollar and leads to its appreciation against other currencies in the market.

On the other hand, the US dollar tends to depreciate against its rivals in response to the rate cuts by the US Federal Reserve. According to the official schedule, the FOMC has to meet eight times per year to consider the latest monetary policy decisions. The committee might decide to raise the interest rates, keep them unchanged or cut them, depending on the economic circumstances, as well as on the future outlook.

It is also important to point out that if the circumstances dictate, the US Federal Reserve can arrange for an emergency FOMC meeting in order to make timely monetary policy adjustments in response to economic crises or other types of unpredictable challenges. In fact, such a thing already happened both in 2008 in the course of the global financial crisis, as well as in 2020, in response to the economic downturn caused by the outbreak of the COVID-19 pandemic.

Impact of the Federal Funds Rate on the Forex Market

The relationship between the changes in the federal funds rate and the exchange rate movements for the US dollar will become even more obvious if we look at the past history of the forex market. In order to do so, let us check this weekly EUR/USD chart:

Here it is worth remembering that by 2000, the US Federal Reserve had raised the federal funds rate to 6.50%, which was considerably higher than many other central banks across the globe.

On the other hand, in sharp contrast to this policy, back in 1999, when the European Central Bank, also known as ECB, started its operation, it decided to set its key interest rate at 3%.

During the following years, in response to higher inflation rate, as well as the weakness of the euro exchange rate, the European policymakers decided to raise rates to 3.75%, however, it was still considerably lower than rates in the United States.

So, it is not very surprising that, as we can see from the above diagram, back in 2000, the US dollar was in a very strong position, with EUR/USD trading close to $0.85 level. In fact, the show of strength of the US dollar has persisted well into 2001, as well as during the first quarter of 2002.

The reality of this situation was that savers and investors could earn 2.75% higher rates with savings accounts and certificates of deposits, also known as CDs, denominated in the US dollars, compared to ones denominated in euros. In addition to that, it is also helpful to keep in mind that those traders who decided to keep the short EUR/USD positions, have earned some sizable payouts in the form of daily rollover payments by their brokers.

It is not surprising that this interest rate differential has led to the strengthening of the US dollar from the late 1995 until 2002. After all, why settle for a 3.75% interest rate on savings accounts or CDs in the Eurozone, when investors could earn up to 6.50% with deposits in the US dollars? This gave a strong incentive to the market participants to convert some of their savings from euros into US dollars and as a result, earn higher yields.

Now, despite those developments, the situation has changed quite dramatically during the subsequent years. The fact of the matter was that, from January 2001 the US Federal Reserve has started cutting rates repeatedly, eventually reducing them all the way down to 1% before the end of 2003.

It is true that the ECB also followed suit and started cutting rates, but they did it more gradually. The result of those decisions was that the euro had around 0.5% to 1% higher interest rates than the US dollar did for some time.

The results were quite predictable. It so happened that from the second quarter of 2002, the EUR/USD currency pair began its long-term appreciation, even surpassing the parity level with the US dollar before the end of the year. This upward trend actually persisted until the end of 2004, by that time EUR/USD has already risen to the $1.35 level.

Now, regardless of those developments, by that time, the situation has improved in favor of the American dollar. The reality was that the US Federal Reserve had already started raising rates from Summer 2004. By 2005, the series of rate hikes by US policymakers gave the US dollar a significant advantage over the euro, since ECB decided to keep rates at 1% until December 2005.

The result of this situation was that the US dollar has recovered a significant portion of its recent losses, with EUR/USD falling down to $1.18 level. In fact, the US Federal Reserve did raise rates all the way up to 5.25%. However, due to the credit crunch in the housing market, the US Federal Reserve has eventually decided to reverse the policy and even start cutting rates in response to this new challenge.

This was followed by the beginning of the 2008 financial crisis. The tremendous economic decline has forced nearly all of the major central banks to adopt near-zero policies. For example, the US Federal Reserve kept rates within 0% to 0.25% from 2008 until the end of 2015.

Here it is worth mentioning that, interestingly enough the European Central Bank was one central bank that tried to avoid this policy, maintaining its key interest rate at 1% until the summer 2012. However, by that time the challenges of the Eurozone Sovereign Debt Crisis made it simply impossible to maintain such levels of interest rates. Consequently, the European Central Bank started gradually reducing rates, until reducing them to zero in 2016. The ECB then has maintained its key interest rate at 0% during the next four years.

On the other hand, the US Federal Reserve has gradually started lifting rates from December 2015, increasing the federal funds rate all the way up to 2.5% by the end of 2018.

Here it is worth mentioning that in the long-term, this policy had a positive impact on the US currency. Despite a great deal of fluctuations in the forex market, the EUR/USD was generally in a long-term downward trend, with the pair eventually dropping all the way down to $1.06 level by March 2020, which was not that far from the parity level.

At that time the majority of central banks across the globe started responding to the economic downturn, brought by the outbreak of the COVID-19 pandemic. As a result, the US Federal Reserve once more decided to reverse the policy and reduced rates back to 0% to 0.25% range. This created an opportunity for the euro’s recovery, with the EUR/USD pair eventually rising to the $1.17 level by the end of October 2020.

So far, we have seen that the policies of the US Federal Reserve had a very significant impact on the EUR/USD currency pair. However, it is important to note that the EUR/USD pair is not the only pair, which has been heavily affected by this indicator.

As we can see here, the GBP/USD has gone through the same cycles as the EUR/USD pair, with some differences in details. However, the general story here is the same: in times when the US federal funds rate was higher than the Bank of England interest rates, the US dollar has made some notable gains and reached multi-year highs.

However, when the US Federal Reserve started cutting rates, it gave some strength to the British pound. As we can see here since 2008 the GBP/USD pair is in a solid downward trend, with the pair falling from the $2.00 level all the way down to $1.29 mark. One of the main reasons for this trend, besides Brexit, is the fact that during 2016 to 2020, the interest rates in the United States were higher than in the United Kingdom.

However, here it is important to mention that the relative interest rate factor mostly works with major currencies, but this is not necessarily the case when we are dealing with the exotic currency pairs. In order to illustrate one example of this, we can take a look at this weekly USD/MXN chart: 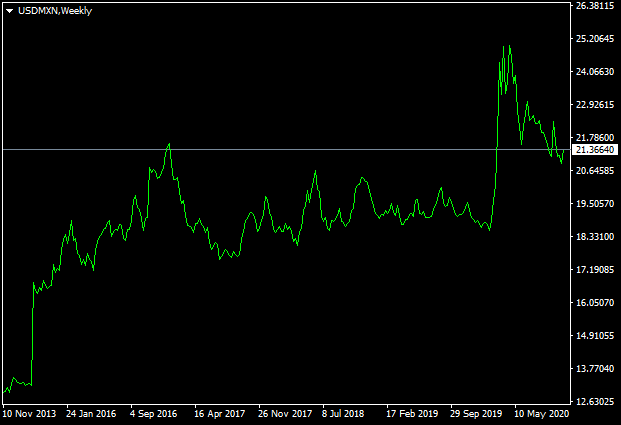 Now the situation here is that during the last seven years, the USD/MXN exchange rate has risen from 12.90 to the 21.40 level. This means that during this period, the US dollar has appreciated by more than 65%.

The fact of the matter is that the Mexican central bank usually has considerably higher nominal interest rates than the US Federal Reserve. Therefore, theoretically speaking, this should strengthen the exchange rate of the Mexican peso.

However, the inflation rate in Mexico is considerably higher than in the United States, which essentially negates all of the advantages the Mexican peso can have due to higher interest rates.

This is why the USD/MXN is in a long-term upward trend most of the time, since in the long-term according to the purchasing power parity theory the currencies with lower inflation rates tend to appreciate with ones against higher inflation rates. This is something to keep in mind when making the trading decisions.

By Konstantin Rabin, editor at InsideTrade.co - a source of financial news and analyses.