Bond Bubble? Time to be Cautious

The bond market is one of the biggest markets in the world. Bond investors and traders tend to be more sophisticated than other investors, asserts Mary Anne and Pamela Aden, editors of The Aden Forecast.

So if they don’t like what they see, for whatever reason, long-term interest rates will keep declining. This could be because they don’t see inflation picking up, or they think business is going to slow down in the months ahead, or whatever.

That’s what had been happening until June 26, and then long-term interest rates did an about-face. They started rising, ending the week with the largest gain in over three months. And then they kept going (see Chart 9). 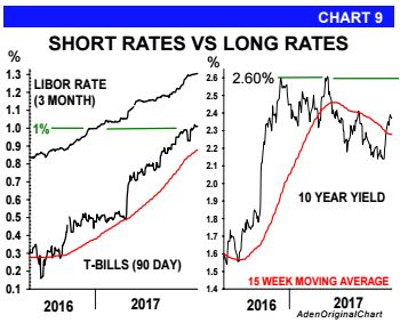 The big improvement in manufacturing was an important factor driving rates higher. It was finally like... see, the economy’s doing better than the bond naysayers thought... Maybe Yellen’s doing the right thing after all.

Keep an eye on the 30-year yield

It’s still too soon to tell, but this could be the beginning of a realignment with both rates getting in sync again. This will not be confirmed, however, until the 30 year yield rises and stays above its mega moving average, currently at 3.18% (see Chart 10A). 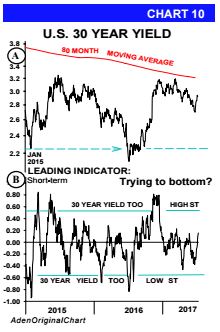 As you know, this moving average is super important. It’s identified and confirmed the mega downtrend in long-term interest rates ever since the 1980s. In other words, it doesn’t change often. So if this trend were to change and turn up, it would be a huge deal.

It would signal interest rates are heading higher for years to come. And since bond prices move opposite to long-term interest rates, it would also be a strong sign the bond bubble has indeed burst and bond prices are headed sharply lower (see Chart 11). 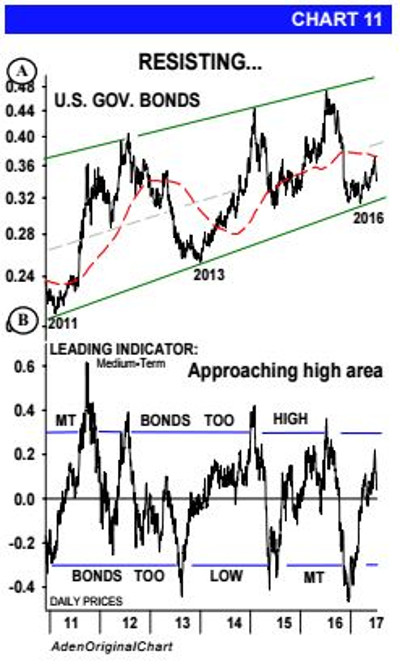 It would also mean the 30 year yield keeps following in the footsteps of its previous movements, we call The Wave (see Chart 12). In fact, if this pattern is broken, it’ll be the first change in yields since 2007. 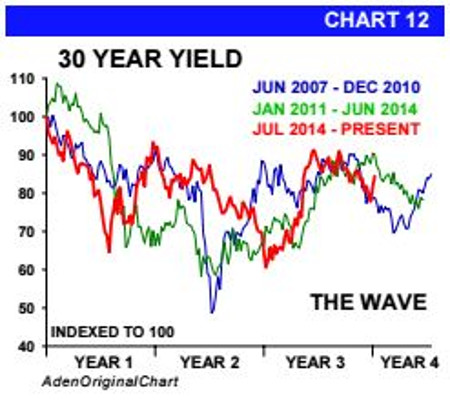 Currently, it’s good to remember, if bond prices and the interest rate action tell us that’s what is coming, we have to go with it because these markets look ahead.

They see things before they become obvious. If this ends up being the case, we’re pretty sure a lot of people will be very surprised. That would especially be true of some of the world’s central banks.

Japan, for example, is the biggest foreign holder of U.S. government bonds in the world. China is a close second and it’s been buying more bonds for the past three months, hitting the highest level in six months. If bond prices fall sharply, along with a weakening U.S. dollar, bond holders aren’t going to be too happy.

But interestingly, that may end up being the case for all bonds... Recently, for instance, the Bank of England, the Bank of Canada and the European Central Bank all said they’re going to wind down their easing programs and/or they’re considering an interest rate hike.

If so, the world would be back in synch, but this time on the upside. This would further reinforce a big trend change is in the works.

Meanwhile, the 10 year yield is still in an almost 10 year downtrend, but it’s poised to rise further. If it were to break above 2.60%, this too would confirm that big changes are coming (see Charts 9 and 13). 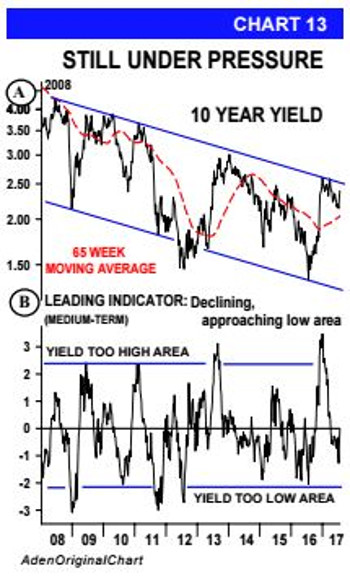 For now, we continue to recommend avoiding bonds and staying on the sidelines. Bonds are risky. There are better opportunities in other markets and it’s best to steer clear.

But remember, at this point anything is possible, so continue to watch these markets and we’ll soon see what happens.