4 Reasons to Own Gold Stocks

The price of gold has been feeling the pressure lately from a stronger U.S. dollar, which is at a four-month high, and rising Treasury yields, explains Frank Holmes, CEO of the top-ranked mutual fund firm US Global Investors and editor of Frank Talk.

Nevertheless, the yellow metal eked out a positive March quarter, returning close to 1.3 percent, while the S&P 500 Index posted its first negative quarter since 2015. This tells me the investment case in gold and gold mining stocks remains as strong as ever.

Below are four more reasons why I think you should consider adding gold stocks to your portfolio right now.

Billionaire investor Warren Buffett once said: “Whether we’re talking about socks or stocks, I like buying quality merchandise when it is marked down.”

Compared to the broader equities market, gold mining stocks, as measured by the NYSE Arca Gold Miners Index, look incredibly “marked down” right now. They’re far below the average gold miners-to-S&P 500 ratio of 0.7 for the nine-year period, and nearly as undervalued as they’ve ever been.

I believe that for investors with a long-term horizon, this makes gold miners look especially attractive as we await valuations to revert their mean, or average. Hopefully this can be achieved without a significant decline in the S&P.

Inflation can be understood as the destruction of wealth. Every time consumer prices head higher, a dollar loses some of its value, whether in your pocket or your savings account. Inflation can also weigh on stock prices, as some investors anticipate it cutting into corporate earnings. They might therefore decide to move their money into other assets.

That includes gold, which has enjoyed a long history of being an attractive store of value during times of higher inflation.

After being mostly stagnant for several years, inflation looks as if it’s ready to stage a strong comeback, thanks to rising oil prices and new trade tariffs imposed by the Trump administration, among other factors.

But which measure of inflation is most accurate? The Federal Reserve prefers the consumer price index (CPI), but there are others, including the New York Fed’s Underlying Inflation Gauge (UIG) and ShadowStat’s Alternative CPI. 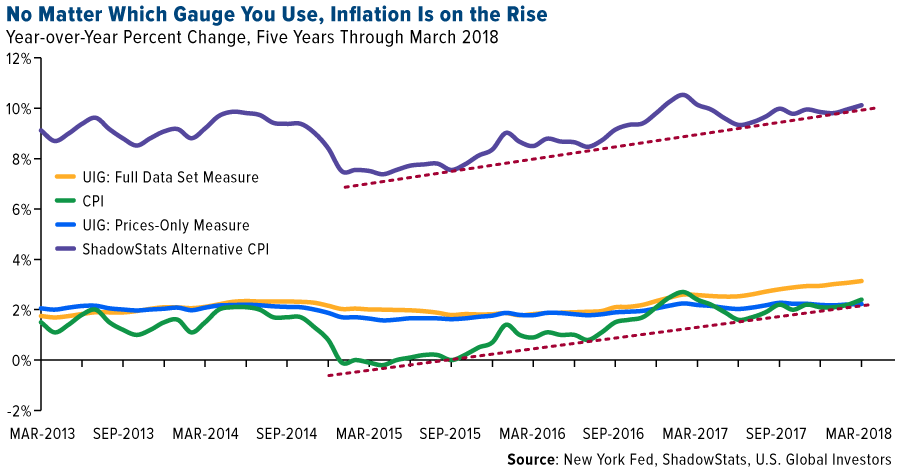 From the chart above, we can surmise that inflation could be highly understated right now. According to the official CPI, prices rose 2.4 percent year-over-year in March. But if we use the Fed’s methodology from 1980, as ShadowStats does, it’s possible prices advanced more than 10 percent from a year ago.

Regardless of which measure you trust the most, it’s clear that inflation has been heating up at a faster pace—meaning it might be time for investors to consider adding to their gold exposure.

3. Gold supply is shrinking while demand continues to grow.

Like most hard assets, prices of gold and other precious metals respond to supply and demand. If supply goes up but there’s little demand, prices tend to struggle to gain momentum. But if the reverse happens—if supply can’t meet demand—prices have a better chance of increasing.

It’s possible we could see the latter scenario in the coming months.That’s because many explorers and producers went into cost-cutting mode after the price of gold broke down from its record high of around $1,900 an ounce in August 2011. Exploration budgets were slashed, and partially as a result, there have been fewer and fewer large-deposit discoveries.

What this all means is that if gold demand were to spike unusually high, there’s a strong probability that not enough gold would be available. We would expect the metal to be traded at a premium.

In the chart above, you can see how a smaller number of projects have been added to the pipeline in some recent years, thanks to a decrease in exploration budgets. Meanwhile, demand has continued to grow as incomes rise in emerging markets that have a strong appetite for the yellow metal—India, China and Turkey chief among them.

I think what’s also driving gold demand right now are concerns over the U.S. budget deficit and ballooning government debt. The Congressional Budget Office (CBO) recently said it estimated the deficit to surge over $1 trillion in 2018 and average $1.2 trillion each subsequent year between 2019 and 2028, for a total of $12.4 trillion.

Believe it or not, servicing the interest on this debt alone is expected to exceed what the government spends on its military by 2023. Now, the International Monetary Fund (IMF), in its April “Fiscal Monitor,” says U.S. government debt will continue to expand as a percent of gross domestic product (GDP), even surpassing levels we last saw during World War II. 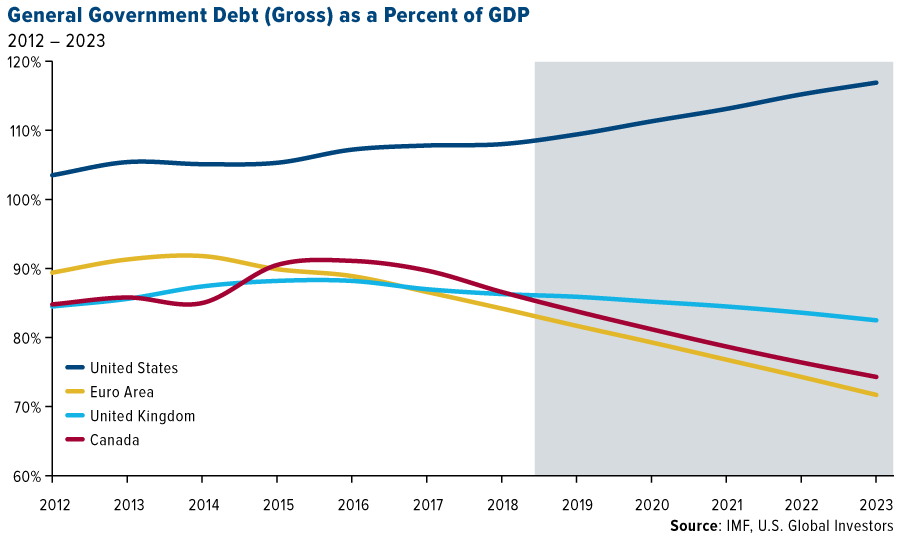 This is a cause for concern, the IMF writes, because “large debt and deficits hinder governments’ ability to implement a strong fiscal policy response to support the economy in the event of a downturn.”

You can probably tell where I’m headed with all of this. Savvy investors and savers might very well see this as a sign to allocate a part of their portfolios in assets that have historically held their value well in times of economic contraction.

Gold is one such asset that’s been trusted as a store of value in such times. As I’ve shown elsewhere, gold has tracked U.S. government debt up since 1971, when President Richard Nixon ended the gold standard.

Chakana Copper Corp. (Toronto: PERU), which listed late last year. It has picked up a property with about a dozen copper bearing tourmaline brecchia pipes in Peru. Some of the first sets of drill results on these pipes are basically 2–3% copper and 2 to 3 grams gold. It's very high grade in terms of the total value of the unit of rock. I think Chakana is still flying under the radar but that it probably should get some attention.

Their Chairman and Director is Douglas Kirwin who has 45 years’ experience and is credited with a number of major mineral discoveries. Their drilling program is fully funded to drill this year so investors should not expect a financing in the near term just more promising drill results.

Previous operators were looking for porphyry copper deposits and ignored the breccia pipes. Chakana is looking at a smaller footprint operation of mining these pipes, and with there being about a dozen in close proximity, where they could do an underground operation.

You have enough vertical relief on the mountains there that you could enter low and go directly into the base of some of these pipes and mine them with gravity. So that one I think Chakana could end up being something special.

After the takeover of Richmont Mines by Alamos last year that further winnows down the list of companies operation in safe mining jurisdictions like Canada. Wesdome Gold Mines Ltd. (Toronto: WDO) is a company that fits that bill of potentially becoming a 100 Koz producer again with the drilling intercepts that have been seeing here recently and with the pending restart of Kiena.

It has production growth in front of it now and with Charlie Page as the Chairman, previously the CEO of Queenston Mining taken over by Osisko Mining, joining the company a couple years back I believe Wesdome has the right people working on unlocking the value of its portfolio that may lead to a takeover as an exit point.

Barsele Minerals Corp. (Vancover: BME), which is in Sweden and has a joint venture with Agnico Eagle Mines Ltd. (AEM); Agnico's been working with Barsele for around three years. Sweden is a very safe jurisdiction, mining friendly, and very different than when we saw Agnico sell its Belo Sun position in Brazil recently, where it was not happy with the way the project was moving through the permitting process.

I think at some point Agnico will move on taking full ownership of the joint venture, but it has been taking its time to make sure this is the right acquisition for Agnico.

No CEO in the mining space wants to do a deal now and then have it look bad in hindsight. That is why it is very important in these earlier stage mining ventures an investor has some insight on the track record of the people they are entrusting to grow the value of the share price.

Meanwhile, I believe an excellent way to gain exposure to the gold market is with our Gold and Precious Metals Fund (USERX). USERX seeks capital appreciation and protecting against inflation and monetary instability—concerns many investors might have right now. It also pursues current income as a secondary objective.