If you recall, Alan Greenspan, himself, former Federal Reserve chairman, said it was "only a matter of time" before negative rates spread to the U.S. That was back in September.

Greenspan’s prediction may well come true sooner than even he expected. With the two-year Treasury yield dipping to an anemic 10 basis points, the next test is 0 percent (or less!). And remember, this is the nominal yield. Adjusted for inflation, it’s already turned negative.

To be clear, I’m not advocating for or in favor of negative U.S. rates. Sub-zero rates don’t guarantee an economic recovery. They haven’t appeared to help the Japanese or European economies in any way. Instead, they only seem to punish people with savings accounts, forcing them to spend their money or else see their balances slowly melt away.

I believe this is a huge contributor to why we’re seeing higher gold prices right now. The yellow metal has surged above $1,700 an ounce, or 34 percent above its per-ounce price a year ago.

Yes, gold doesn’t pay dividends or interest, but then neither do Treasury bonds right now. And with S&P 500 companies losing revenue, an estimated $37 billion in dividends could be cut or suspended this year.

Royal Dutch Shell (RDS.A) recently cut its dividend for the first time since World War II. And Disney (DIS) became the latest blue-chip to suspend its dividend, despite the runaway success of its new streaming platform, Disney+.

Rising investor appetite for gold is reflected in the fact that assets under management (AUM) in global gold-backed ETFs reached a new record high in April, according to World Gold Council data.

AUM stood at $184 billion as of April 30, with holdings also hitting a new all-time high of 3,355 metric tons. Assets in such ETFs grew in 11 of the 12 previous months, adding 80 percent to total AUM.

Although demand for gold jewelry has been negatively impacted by the COVID-19 crisis, “history suggests that the likely strength of investment demand may offset this weakness,” the World Gold Council writes in its April report.

For more than a couple of months now, I’ve said that gold mining companies will have a strong first (and second) quarter thanks to higher metal prices. Stock prices, as you know, are largely driven by revenues and free cash flow (FCF).

FCF is what companies have in the bank after paying operating costs, taxes and other expenses. The higher the cash flow, the better the company can expand its business and reward shareholders. 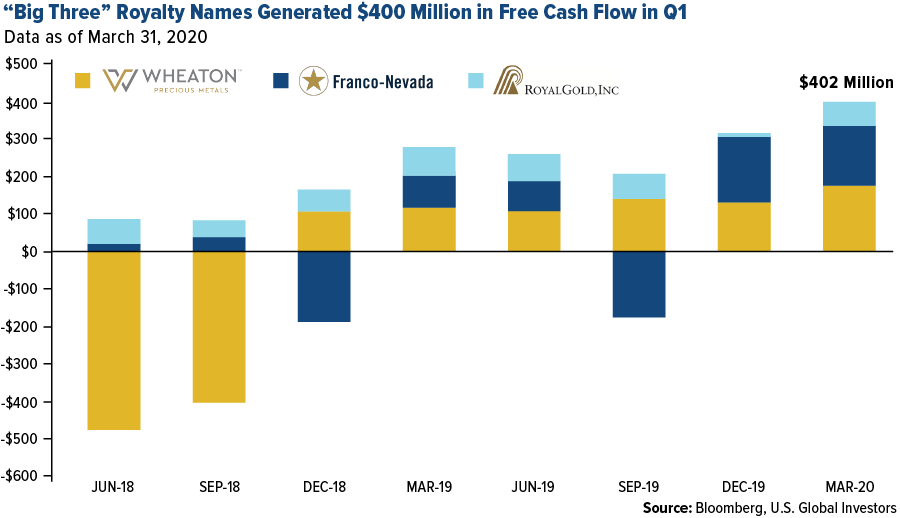 Looking ahead, Raymond James analysts project Franco-Nevada delivering earnings per share (EPS) of $1.91, up from $1.82 in 2019. If Bank of America is right and the price of gold rises to $3,000 an ounce in the next 18 months, Franco’s EPS could be as much as $2.29, according to Raymond James.

As for Royal Gold, Raymond James rates the company as Outperform, seeing EPS of $2.90 this year, up from $1.48 last year.

The company’s “high-margin metal sales” can be expanded with “minimal” general and administrative costs, analysts Brian MacArthur and Chris Law write, adding that Royal Gold has a “high-quality, diversified asset base in lower-risk jurisdictions, as well as a flexible balance sheet to support future investments and a growing dividend.”