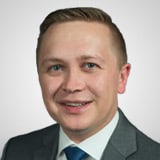 The shares of outwear specialist Canada Goose (GOOS) could be set to make a major turnaround after choppy trading in 2019, asserts Matthew Timpane, senior market strategist for Schaeffer's Investment Research.

Starting on the charts, GOOS has recently found a home near the $35-$36 area, which is roughly half the stock's all-time high. This region also equates to about three times the stock's initial public offering price (IPO) from 2017 and is the site of the early 2018 highs.

Beyond that, we can call out a trendline connecting higher lows for Canada Goose since June, along with a year-long symmetrical triangle pattern that looks overdone. Considering the bearish sentiment setup on the retail concern that we'll soon dive into, we would expect this technical phenomenon to resolve to the upside.

Overall, the convergence of all these non-trivial price points near GOOS's current trading position seems to be pointing to a solid entry point for bulls.

But as we alluded to, the overly bearish stance seen from traders and analysts is what really makes Canada Goose stand out on our contrarian radar.

Take the short interest levels surrounding the stock. The number of shorted shares hit an all-time high in mid-November and has started to roll over -- but close to 30% of the total float remains dedicated to short interest, making the retailer a prime short-squeeze candidate.

Bears are prevalent in the options pits, as well. In fact, the security's 10-day put/call open interest ratio at the major options exchanges is at an annual high of 3.40 as of this writing, underscoring the pessimism surrounding the stock.

With many analysts also still sitting with bearish views, there's potential for a shift in sentiment from speculators and analysts to also spark upside in GOOS.

As for the fundamentals, the company looks to be making the proper moves to compete in the current world of retail. Maybe most importantly, it's expected to see growth of 20%-30% in its direct-to-consumer business, which should help gross margins as it moves away from wholesale.

As part of this transition, it's set to nearly double its physical store presence in 2020, while it's also planning a strong push into footwear that will give it another product category for growth potential.

Given this well-rounded setup for Canada Goose, we're looking for a move up to $52.50 for the stock, with additional upside possible to the $57.50 region — a more than 50% move.