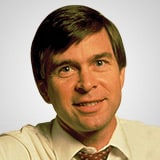 Tom Bishop specializes in uncovering under-the-radar opportunities in small cap stocks. His Top Pick for 2021, Anavex (AVXL),  is up 400% so far this year, making this the #1 performing stock out of 122 investment ideas in our 2021 Top Picks report. Here's a mid-year update on the stock from the editor of BI Research.

Anavex's lead compound Anavex 2-73 (A2-73, oral) is in clinical trials for Alzheimer’s disease (just finished over-enrollment of a phase 2b/3, 450-patient, 48-week clinical trial after very encouraging long term results from the phase 2a trial, see graphic below); Parkinson’s disease dementia (just finished a successful Phase 2 trial, also supportive for Alzheimer’s, with more data due out shortly); and Rett syndrome (for which it has three Rett trials in various stages with encouraging clinical data so far, and more due out shortly).

Encouragingly, A2-73 with its upstream Sigma-1 receptor activation approach (rather than anti-amyloid plaque approach that has failed so often) has consistently demonstrated positive and statistically significant results across this wide range of neurological diseases, which indicates that the oral drug appears to work and is clearly able to cross the blood/brain barrier.

“Data suggests [and numerous articles in medical journals confirm, for example see the Anavex press release dated 6/14] that activation of SIGMAR1 results in the restoration of complete housekeeping function within the body and is pivotal to restoring neural cell homeostasis and promoting neuroplasticity.”

In other words, Sigma-1 works further upstream from the problem and can be likened to the brain’s janitor, which in his later years gets lazy and doesn’t clean up the amyloid plaque and such that can clog the brain. It’s called autophagy — “the body's way of cleaning out damaged cells, in order to regenerate newer, healthier cells.”

Anavex 2-73 activates the janitor to get out there and keep up with his house cleaning. In addition, through genomic analysis the Company has identified a biomarker that 80% of people have which when present increases the efficacy of A2-73 vs. the other 20%.

While Rett may get to the finish line first due to shorter trial periods, Alzheimer’s is the most exciting indication based on the magnitude of this unmet medical need and the data so far.

For just one example, from the extended phase 2a trial based on patients on the high dose of A2-73, that have continued to take the drug for at least three years, they saw almost no decline in MMSE and ADL scores, while those on the lower dose (which essentially acted as a placebo because it hardly worked at that dosage) saw the decline in scores that Alzheimer’s patients typically see (the red line).

But a graph is worth a thousand words (note that the p-values are extraordinarily significant, where <=0.05 is considered significant by the FDA). 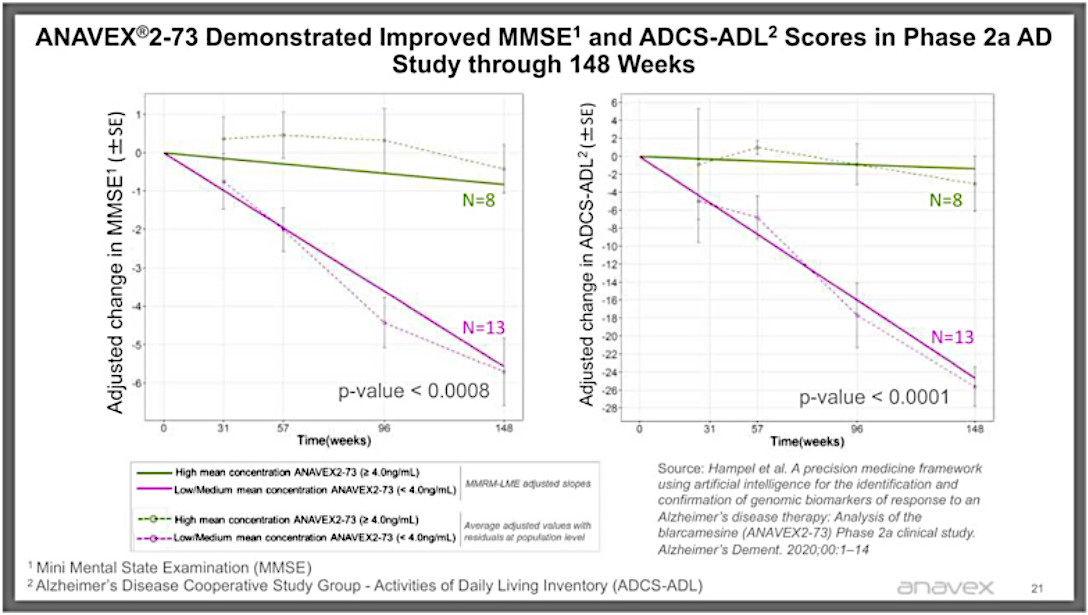 There is plenty of anecdotal evidence as well — an artist who was able to return to painting, a guy who was able to play golf again, the pianist who resumed playing and the grumpy couch potato who started playing with his grandkids again and even went into a TV station to give a very lucid and even humorous interview. And at the end of the day, these are the real life results you really want to see.

An estimated 5.8 million Americans (and 50 million worldwide) currently suffer with Alzheimer’s disease which along with other dementias cost our nation an estimated $305 billion in 2020. Alzheimer’s is the third leading cause of death in the U.S. behind heart disease and cancer and the only one of the top 6 diseases in the U.S. where the death rate has risen, rather than declined.

As demonstrated by the instant $20 billion increase in the market cap of Biogen on the FDA’s controversial approval of its Alzheimer’s monthly infusion therapy drug on 6/7 (for which efficacy was so poor that most doubted the FDA would even approve it), a drug that works on Alzheimer’s is clearly a holy grail of medicine.

This also demonstrated how desperate patients, and ergo the FDA, were to get anything approved that might help these patients after nothing new was approved in almost 20 years. This approval was actually good news for Anavex because it indicates a lowering of the bar for approval.

And based on data so far investors believe A2-73 will be able to show much greater efficacy in any event, plus … A2-73 is an oral drug, so patients would likely flock to it, leaving Biogen’s monthly infusion therapy … a buggy whip.

As positive statistically significant data continues to come in from the various trials this year, the shares have almost quadrupled so far in 2021 to around $20. However, if $10 billion is a reasonable estimate for annual sales for an Alzheimer’s drug that actually works, and Anavex were to just trade at a very low 2 times sales (and Biogen’s recent $20 billion surge bears this out), and even assuming the share count rises another 42% to 100 million, this would equate to an AVXL share price of $200.

While more about the trial results can be found in a report we issued dated 3/10 (a link is at the bottom of our home page), one of my favorite more-anecdotal quotes is from an investigator involved in the ongoing Alzheimer’s trial who said simply, “It’s just so exciting to be part of a Alzheimer’s trial and to see what we are seeing in these patients.”

You see, Alzheimer’s patient scores only go in one direction (worse), but clearly they were seeing patients showing improvement or at least holding the line and that hasn’t happened in other Alzheimer’s trials.

That much they can tell without breaking the code. The company has a record $75 million in the bank, which along with inputs from parties financially helping to finance these trials, could last this frugal company for nearly 3 years.

Meanwhile, the CEO recently commented that Anavex is resisting any partnering interest and has retained 100% until it can demonstrate that A2-73 works and get fair value for its shareholders. Then I think big pharma is quite likely to swoop in.