Energy prices have been on a wild ride in the past year, pulled between efforts by OPEC to cut production and by the resurgence in US production as unconventional oil wells here come back into production, now economical to operate at lower prices than ever before, notes technical expert Marvin Appel, editor of Signalert's Systems and Forecasts.

The latest move in oil has been down in the past month, bringing the US Oil Fund (USO), an ETF that tracks oil futures contracts, to potential support at the $9 area and to oversold levels as judged by MACD. 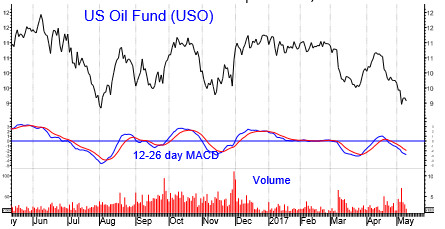 USO is too volatile for my tastes and, as an ETF that holds futures contracts, has a downward bias that makes it unsuitable for longer term holding. But integrated oil companies’ stocks generally track trends in oil prices, and XOM looks attractive for covered call writing at current levels.

The weekly chart of XOM below shows that XOM has formed a potential base in the $80.50-$83.00 area in the past few months. 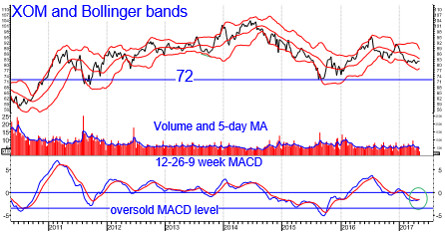 In addition, MACD has generated a sell signal which is a good sign even though it would be even better if there were a positive divergence or rising double bottom to confirm it. XOM is the most financially sound and least volatile of the major oil stocks, and it pays a nice dividend of 3.7%.

Due to the volatility in oil prices, options on oil stocks have higher implied volatilities than the overall S&P 500. That provides potential opportunity for covered call writing.

Between now and expiration you would also get two dividend payments of $0.77 (in August and November, the record date for the May payout having just passed). That makes the potential total return 6.6% over the next eight months.

In the latest edition of Market Review, Larry Gaines of Power Cycle Trading discusses the timing and...

When short selling put options, a question people ask me is, “Okay, Markus, how do you decide ...

Virgin Galactic (SPCE) has been a popular stock this past year, but it got a huge boost this past we...