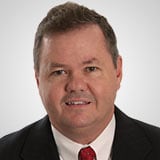 Just maybe the U.S. will grow a lot faster than expected in 2018. The framework is there for a self-feeding virtuous flow of money into America. If you are a long-term U.S. dollar bear, you may want to be a cautious one, writes Jack Crooks of Black Swan Capital Tuesday.

Quotable
“Where is all the knowledge we lost with information?”

As I scan the papers, and the web, I have noticed bank analysts and newsletter writers are becoming increasingly bearish on the U.S. dollar.

Effectively, the dollar downtrend will continue in 2018 is the view. This seems the consensus thinking to justify a dollar bearish view:

--All good news is already priced in the U.S. dollar, for instance:

Tax cut legislation will have only a minimal flow-through beneficial on the U.S. economy in 2018.

--Given the synchronized global recovery, other central banks will start to play catch-up on interest rates and that will be bad for the dollar.

It makes sense. But lots of things make sense in the investing world until Mr. Market decides to prove rationales flawed.

If we use net bullish positioning in the Euro-USD CME futures contracts as a proxy for dollar bearishness, you can see we may be near some type of extreme: 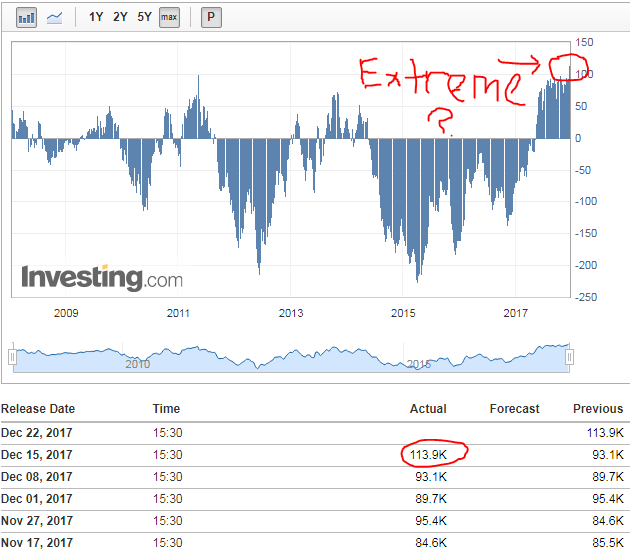 At +113.9k net bullish Euro-USD positioning, it represents the highest on record going back to the beginning of 2009. Hmmm…this represents lots of potential selling pressure should dollar bearish rationales prove wrong; let’s take a look at what might do just that.

As it relates to the tax cut; the more one looks at that animal the better it appears. But the mainstream media would never give Trump credit for anything good. So, for the most part, the public is exposed to sniping and cherry-picking on the tax cut from the mainstream media. But there is lots of good in there, granted it’s not perfect.

It is always odd to me when others complain about keeping more of their own money.

If you include that, you get up to roughly half. The real danger we face is that number will creep up and up and up. The only effective way I think to hold it down, is to hold down the amount of income the government has. The way to do that is to cut taxes."

From The Wall Street Journal today:

Besides tax reform, one of President Donald Trump’s most cherished goals is reducing the gaping U.S. trade deficit.

In a little-appreciated way, the tax bill expected to pass Congress this week may do just that. This wouldn’t come by making businesses and workers more productive or changing other countries’ trade practices, but by curbing the incentive for multinational companies to artificially shift profits abroad.

Independent research suggests this could reduce the trade deficit by half, or roughly $250 billion a year, and deliver a one-shot 1% or greater boost to annual gross domestic product. This would be an accounting effect rather than a change in actual business or worker income. (It would also be independent of any increased work or investment from lower tax rates.) Nonetheless, some analysts think the positive optics might curb some of Mr. Trump’s protectionist instincts, which are heavily driven by the trade deficit.

Analysts at Deutsche Bank are even more optimistic. They estimate the deficit could be reduced by $150 billion to $270 billion a year, with a corresponding one-off boost to GDP of as much as 1.4%. They think this effect could materialize in as little as a year, judging by a similar tax change in Britain in 2009.

Hmm…a one-off potential jump in GDP of 1.4% and shrinking trade deficit.  Sounds good, and may mean those expecting only three hikes and moderate-benefit from tax reform may want to get their forecast erasers ready.

The chart below shows the U.S .Current Account (current in deficit of -112.82 billion) versus the U.S. Dollar Index since 2000.

The current account deficit started improving in mid-2006 (just before the credit crunch and likely a contributing factor—see Triffin dilemma) and the U.S. dollar has followed.  So, if the current account improves further as the WSJ and others suggest, does it make sense to be dollar bearish, at least longer term? 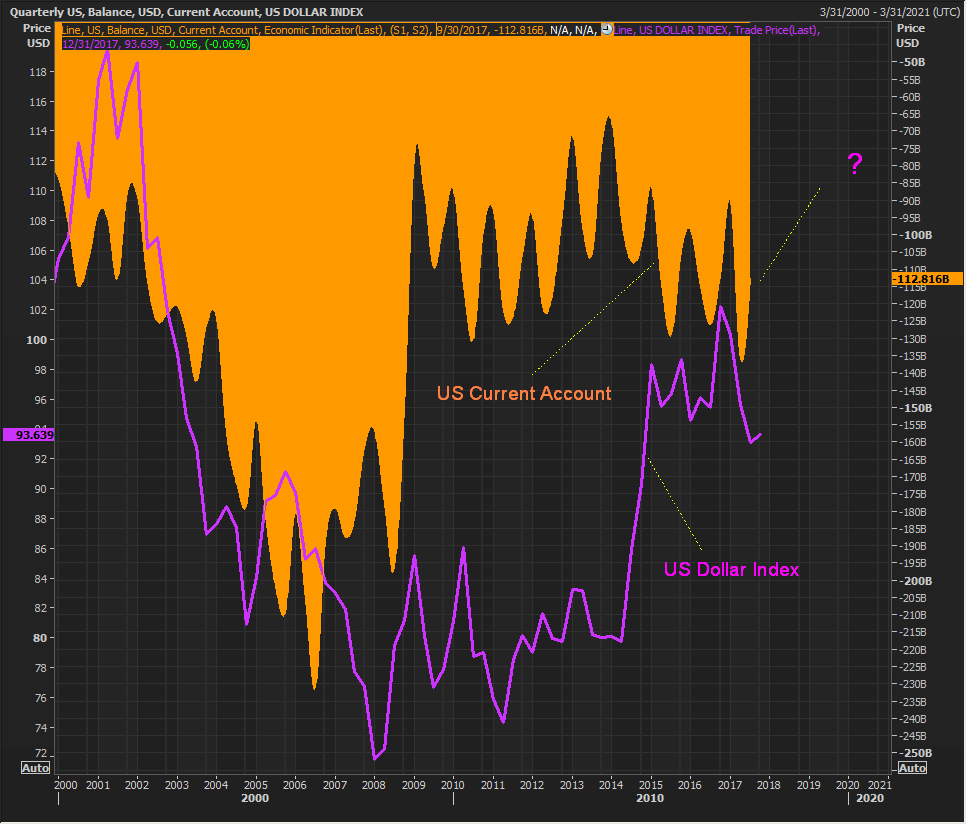 And of course, there is more in the president’s bag of tricks.

This excellent summary, “Trump offers a daring program to restore US dominance,” from David P. Godman, writing in the Asia Times, of the latest US national security report in which President Trump spoke briefly about yesterday.  Some excerpts [my emphasis]:

I have linked the full article above.  Lots of interesting stuff in there and well worth the read.

The point in sharing this is to suggest just maybe the US will grow a lot faster than expected in 2018.  The framework is there for a self-feeding virtuous flow of money into America.

Granted, words on a paper and implementation are two different things; especially in a world where U.S. politicians have so many conflicting interests they put ahead of the general welfare of the country. But, stranger things have happened.

So, if you are a long-term U.S. dollar bear, you may want to be a cautious one.