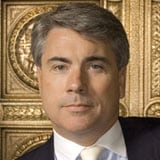 Trade ideas Hess and Kellogg’s from John Person, a 36-year trading veteran who has written several books and is a featured speaker Feb. 9 at MoneyShow Orlando. And Feb. 27 at TradersExpo New York.

Here are two stocks I want to share with you what I believe have great promise over the next six months: Hess and Kellogg’s.

First, let us take a quick review of the market's performance since late September, plus I also want to give an update on the three stocks in last September’s article, which at that time I thought would be excellent trades as we headed into 2018.

It’s pretty hard to list all the major market news events and records that were shattered in 2017, but here’s a couple that really stand out.

For starters, we experienced a major global interest in cryptocurrency trading as both the CBOE and the CME launched their versions of the bitcoin futures product.

Why I mention this is in reference to that last article I wrote in late September with three stocks I liked then.

In anticipation ahead of what I expected to see as the Mid-October break, my first stock was really off the beaten path, especially as a retail store: Tractor Supply (TSCO).  I believed we would have a chance for a pullback towards the Persons Quarterly and Monthly Pivot level near $57.00- $57.50 area by mid-October. On October 26 it opened near the low at $57.25 and now trades at $79.35 as of January 8. A gain of over 45% since that low was hit.

A second was Kohl’s (KSS) as it was announced they were teaming up in a partnership arrangement with Amazon (AMZN). I was also expecting the typical mid-October break to see if we could go long near the Persons Support levels between the $39.35 to $40.14 level.  This one took a bit longer to break but did the same type of move with a gap lower open and reverse higher by day’s end. The low was $37.97 on November 9 and now trades at $57.17. A gain of 42% since that price objective was hit.

The third stock was Signet Jewelers (SIG).  I was hopeful we would have that typical October correction to get this stock trading back near the Persons Pivot support levels between $59.80 to the $61.00 level.  I believe as we headed into the holidays and then geared up for Valentine’s Day, the targeted consumer would be in a better financial position due to improved economic conditions both here and in the UK where Signet Jewelers companies operate.  The store names under Signet’s umbrella include Jared’s, Sterling, Kay, and Zales Jewelers.  Of the three names, Signet is below its support level trading between $54.00 and $57.00.  It still looks technically sound and should give an investor with at least a nine-month horizon some decent risk-reward returns while still generating a dividend return. In addition, it has listed options, so if one wanted to create a bullish options strategy or sell out of the money calls against a long stock position they will have that opportunity available.

Those three stocks no doubt were off the beaten path, but this old saying applied here, “buy them when nobody wants them, and sell when everyone has to have it.”  At the time, not many wanted to buy any of those three stocks.

Now as for the two new names, I see as outstanding risk- reward opportunities as we head into late January to early February.

Once again, I am expecting a correction, which typically is labeled as the “deferred tax break” mid-January correction.  Therefore, I am looking to buy on a market pullback these two stocks.

The first is in the Energy sector, Hess Corp. (HES).

The graphs below are weekly periods using TradeNavigators Genesis Charts. The Volume indicator (OBV) plus the seasonality trend line in orange and the Relative Strength (RS) in red, signals a major turn is in the works.

The price action suggests a potential inverted Head & Shoulders bottom that on a pullback should be supported at the neckline price area of $45.50 level. Upside objective is at least the $60.00 area by late April. Traders should place stop orders once filled under $42.00 or roughly 8%. The upside measuring technique gives the first profit target roughly a 30% upside. 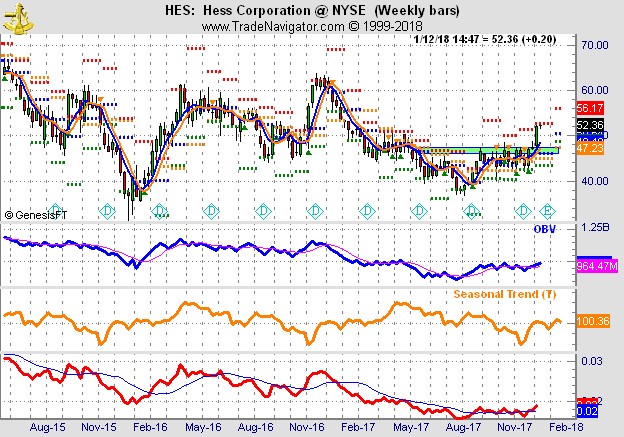 The other stock in the consumer staple, dry goods sector is cereal maker Kellogg’s (K).  Again, we have a nice “V” shaped bottom, that may form an inverted Head and Shoulders bottom if we do see a correction and support holds. The nice feature here is it also generated a new Monthly Algo PPS buy signal.  I am looking to enter longs on a correction near $65.50 using stops under $61.50 or roughly a 6.50% risk. The upside target is near the old highs near the $80.00 – $83.00 level for an 18% potential gain by late May. 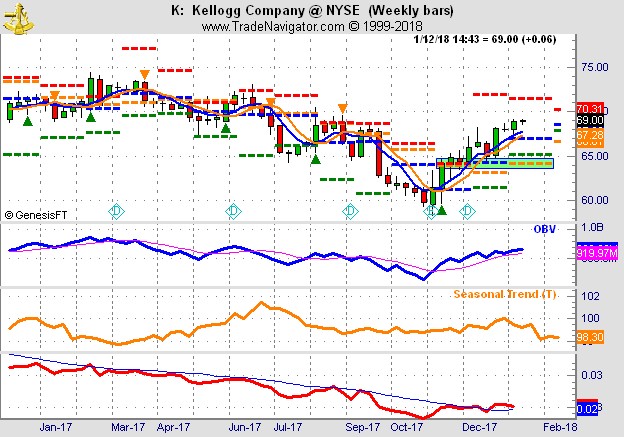 The first three stocks along with these two new ones populated in my scans using Trade Navigator by Genesis Financial, TradeStation, and Thinkorswim using the PPS indicator.

I will be giving presentations on how to better use this indicator along with others at the upcoming Orland Money Show in a master class session as well as the New York Traders Expo,

Both sessions will be a great way to learn how to use this algorithm study for these trading platforms. I look forward seeing you at the next event. In the meantime, I hope the markets treat you well.