The commodities sector has been climbing amid the recent instability of equities and rising rates. Investors seeking to profit may want to buy the iShares Commodities Select Strategy (COMT), writes Paul Dykewicz, editorial director of Eagle Financial Publications.

The fund, which closed at $39.51 on May 10, 2018, is one of the top recommendations of Bob Carlson, a seasoned investment pension fund advisor who writes the Retirement Watch investment newsletter.

Carlson expressed optimism about economic growth continuing in the months ahead and he predicted the commodities fund would keep climbing “until the economy stumbles.” COMT is up 5.82 percent so far this year through April 20 and 20.63 percent during the past 12 months.

“We’re in the late part of the economic cycle when growth is strong, and inflation is rising,” Carlson said. “Historically, that’s a good period for commodities.” 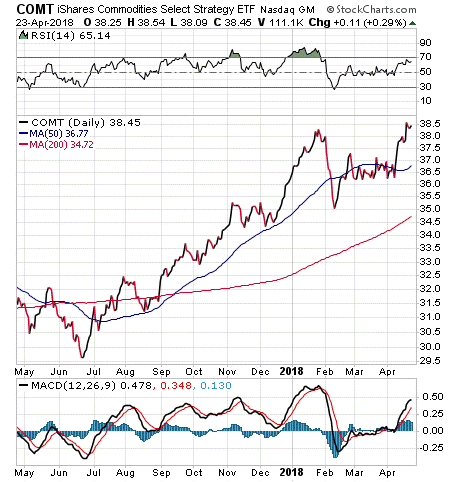 Commodity prices ascend due to increased demand and fears about inflation, Carlson said. Some of the recent surge was due to an increase in energy prices, which have risen recently along with global growth and demand for commodities, Carlson added.

“Demand is growing faster than supply,” Carlson said. “That’s going to continue for a while because a lot of production capacity was shut down during the 2014-2016 bear market.”

Rising demand and prices for commodities is expected to continue

It usually takes several years for production to ramp up, so Carlson said he expects no slackening in rising demand and prices for commodities.

Rising inflationary expectations also boost commodity prices, said Carlson, who predicted that trend will continue as long as the global economy is growing. COMT seeks to enhance total return by providing exposure to a broad range of selected futures and commodity producer stocks.

“I think COMT is one of the better ways for individuals to invest in commodities,” Carlson recently wrote to his Retirement Watch readers. “It’s a low-cost exchange-traded fund. Instead of tracking an index, the fund is managed by BlackRock using a proprietary formula that allocates the fund among the commodities included in the S&P Goldman Sachs Commodity Index. The fund doesn’t try to capture short-term market moves; it focuses on intermediate- and longer-term trends.”

COMT avoids the need for investors to receive a Schedule K-1, which complicates preparing tax returns. The fund specifically invests in a combination of commodity futures and stocks of commodity producers.

Lately, the fund has been about 30% in stocks and 70% in futures, but it almost always is at least 25% invested in energy commodities, Carlson said.

In Carlson’s Retirement Spotlight online seminar, he added that the commodities fund stands out from other investments in the sector because it is low cost, very liquid and has been outperforming most, if not all, of the other commodity ETFs in recent periods.

“COMT is one of the few that doesn’t simply follow an index, and the commodity indexes have various flaws and shortcomings,” Carlson said.

“Plus, the manager, BlackRock, uses a proprietary trading program to adjust the allocation among different commodities,” Carlson said. “It doesn’t worry about short-term trends. But it seeks to capture intermediate and long-term trends, reducing positions in commodities with poor outlooks over those periods and increasing allocations to commodities with better outlooks.”

Since commodities and inflation hedges tend to do well in the late stage of an economic cycle, there is further reason to own them now and potentially increase exposure to these positions as the current economic cycle progresses, Carlson wrote in the May 2018 issue of Retirement Watch.

COMT’s total assets top $621.9 million, its yield is an enticing 5.14 percent and its expense ratio is 0.48 percent. Launched October 15, 2014, the fund offers liquidity with a healthy average daily trading volume of 111,120 and an equity beta of just 0.53 percent that shows it is significantly less volatile than the stock market. An equity beta of 1.0 would indicate equal volatility to the market, while beta above 1.0 would signal more volatility than the market.

For investors seeking to diversify into holdings that are not heavily correlated with the increasingly volatile stock market, commodities are worth considering. With demand for commodities on the rise along with prices and interest rates, the timing could be especially good to assess whether COMT is a fund worthy of buying as a portfolio hedge in case the market slides again soon.