Since 2015, Microsoft (MSFT) shares have risen an average of 31% annually. And the real growth lies ahead as more companies embrace the cloud and SaaS applications. FedEx-like tracking for everything is coming. Buy Microsoft shares into any pullback, writes Jon Markman.

Margins are razor-thin in the food industry. So, when a bacteria outbreak like E. coli hits, it can really wreak havoc throughout the entire supply chain.

That’s how Frank Yiannas, vice president of food safety at Walmart (WMT), described it to The Wall Street Journal.

He’s being coy. It’s a revolution. And investors should take note.

These food industry giants want to create a food trust. They want track food from the farm to the grocery aisle.

If something goes wrong, they will know exactly where it began, and why.

That type of transparency would forever change the food supply chain. It would keep suppliers on their toes.

One wrong move could kill years of goodwill. It would also give distributors and processors unprecedented control.

Related story: This Stock Lets You Feast on Millennials’ Love of Restaurants

To make this possible, the food companies will use blockchain. The distributed digital ledger, best known for its role in keeping cryptocurrencies in check, will do the same for the food supply chain.

It will create an electronic verification network in real-time for every single food product in the trust.

Blockchain: The missing link in the food chain

Blockchain is uniquely suited for this task. That’s because its ledger system is permanent and can’t be altered.

Every time a verified event occurs, a block is created on the chain. And it is viewable by all. That makes the system inherently “trustless,” which in this context means it does not require trust.

Blockchains are popping up everywhere …

This USC system is supposed to let banks conduct transactions without waiting for traditional money transfers.

In January 2018, Maersk, the container ship conglomerate, announced a blockchain for transoceanic logistics. The Danish company hopes this open-source, digital platform will become the standard for a $4 trillion shipping industry that’s currently drowning in bureaucratic red tape and piracy.

However, investors should look elsewhere for blockchain winners …

My research suggests they should focus on Microsoft (MSFT).

Unlike IBM, the Redmond, Wash., software giant has the cloud computing scale to be a dominant player in blockchain. It also has a history of solving big, real world problems with the technology.

In 2015, the company shifted its business model from selling software licenses to digital subscriptions. The distinction created a flood of partners looking to sell cloud services on Azure, its cloud network.

Microsoft needed a system to quickly assess creditworthiness. The traditional process involved working with individual banks to issue standby letters of credit for the new sellers.

But the process was antiquated and involved several levels of manual verification. So Microsoft worked with Bank of America (BAC) to digitize and automate the entire process with blockchain.

Since 2015, the company has expanded its work with blockchain … 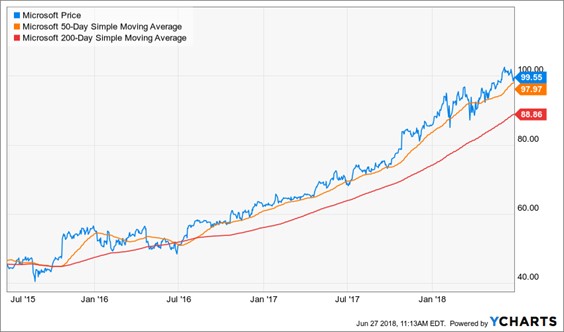 It partnered with ConsenSys, a New York blockchain software company, to bring the ethereum blockchain to Azure, as a Software-as-a Service layer.

[Weiss Cryptocurrency Ratings currently gives Ethereum a “B-” grade. To discover what that means, and how to put the power of the proprietary ratings to work in your own crypto portfolio, click here.]

Microsoft leveraged this modularity to win over R3, a consortium of 200 financial institutions. Together, they are developing Corda, a blockchain specifically built to reduce transaction friction in financial services.

In 2017, Bain & Co., a research and analytics firm, estimated $35 billion in operating and capital cost savings for a blockchain of this scale.

For Microsoft, Corda is the gateway. The prize is untold billions in sales of cloud computing services.

It is a big business for Microsoft. In the first quarter of fiscal 2018, Azure commercial cloud revenue jumped 58% to $6 billion.

As businesses move to the cloud, having a blockchain software module is a huge advantage.

The prospects are being reflected in the price. Since 2015, shares have risen an average of 31% annually. And the real growth lies ahead as more companies embrace the cloud and SaaS applications.

FedEx-like tracking for everything is coming. Buy Microsoft shares into any pullback.

Editor’s note: For more investing insights straight from Jon, consider joining him on the 31st Forbes Cruise for Investors. It sails from Rio de Janeiro to Buenos Aires Jan. 24-Feb. 3. Click here for all the details.

Can the Chinese Coronavirus Overwhelm the Fed?
11 hours ago